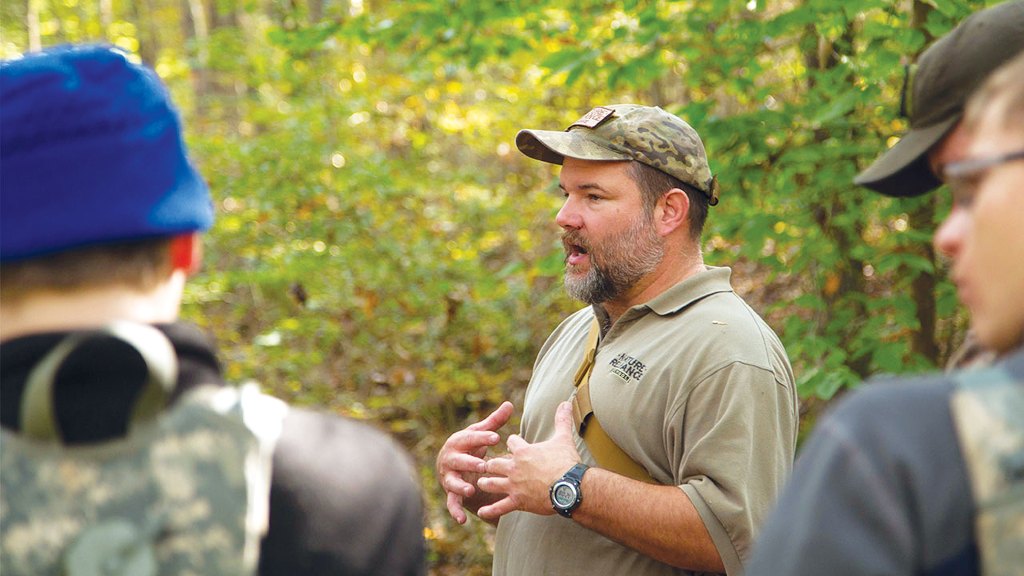 What began as life in an “outdoorsy” family evolved into a full-time job, training civilians and law enforcement personnel in everything from survival to tracking skills.

“I’ve been doing these skills my whole life,” Caudill said. “I taught martial arts for a number of years and had a few students who started asking about these skills. Then the survival genre on TV blew up at the same time.”

“I’m very blessed God put the nature school in my path before that happened,” he said. “I never intended on running a nature reliance school. I couldn’t do it without the community of people. They are some of the finest in the world. Some of my students are also my teachers at the same time.”

Caudill said he leads group classes about half of the weekends during the year. On weekdays, he may teach classes on tracking for law enforcement personnel or conduct nature awareness workshops in public libraries to encourage people to get outside and into nature.

“The most popular (class) is the wilderness safety and survival,” he said. “We teach people to get outside more often and be safe, whether it’s a day trip to the (Red River) Gorge or a multi-week trip or hunting.

“That’s where we teach people to be safe and avoid trouble in the first place, and if they get into trouble, how to get out of it.”

Following that entry point, the options expand. The Nature Reliance School website lists four levels of wilderness survival, which can include sections of edible and medicinal plants, navigation and tracking.

The tracking courses have been popular with law enforcement from local agencies to the Department of Defense and federal marshals, he said. Caudill has traveled over much of the eastern half of the U.S. teaching classes and leading workshops.

All his classes touch on four things: mindset, skills, tactics and gear or equipment.

“If the environment offers tools, we can use them,” he said. “If the resources are available, I can teach you to get the right gear without breaking the bank doing it.”

He’s also debuted a series of YouTube videos and recently published his first book, “Extreme Wilderness Survival.” The book goes on sale in March, he said, but is available for pre-sale now.

The growth of the school is anything but a surprise, he said.

“I set it as a goal and I achieved it,” he said. “It’s been very rewarding. We’ve done a tremendous amount of work through the Department of Defense for wounded warriors and those with PTSD.”

Caudill, a certified naturalist, teaches most of the classes along with Tracy Trimble, who has been involved since the beginning, he said. His family, wife Jennifer, son Zane and daughter Lily, are all involved as well.

“It’s a proven fact (getting outside) is good for us physically, mentally and spiritually,” he said. “If Nature Reliance School can be the catalyst for getting people outside, I’m all for it.”

For more information, go to naturerelianceschool.org.