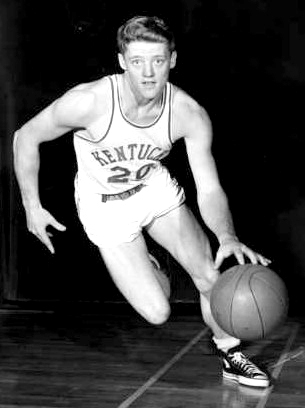 Some probably knew Lindle Castle as a member of the University of Kentucky’s star-studded freshman team and its 1951 national championship basketball team.

Clinton County remembers him as their legendary coach of the Bulldog basketball team for 19 seasons.

But Clark County will remember its native son as one of Letcher Norton’s early George Rogers Clark High School players in the 1940s.

During Norton’s dynasty run in the late 1940s and early 1950s, Castle was a guard for the Cardinals and a defensive specialist.

Former GRC coach Guy Strong — who was also a teammate with Castle at UK — played against those GRC teams at Irvine High School.

“I was a senior in ‘48 and he was a junior,” Strong said. “I was a guard and he usually guarded me. We beat them twice when I was a senior, but he was an outstanding defensive player and a good ball-handler.”

Along with players like Linville Puckett and Howard Rogers, Castle helped Norton to a dominant six-year run in the 16th Region, capped by a state title in 1951.

Castle was at UK by then with Strong, Cliff Hagan and Frank Ramsey.

Castle was a starter on the 1949-50 freshman team, nicknamed the ‘Kittens.’ He averaged 8.2 points a game that season — 15-1 for the Kentucky rookies — but was known more for his defense and kick-starting the UK offense in transition.

But Castle saw limited action as sophomore in the championship season of ‘51. He transferred to Morehead State where he finished his collegiate career.

There he played for coach Ellis Johnson — earning honors in his senior year again, this time being named to the All-Ohio Valley Conference team.

Castle retired from coaching after the 1980 season. He joined the three coaches he played for — Adolf Rupp, Norton and Johnson — in having a gymnasium named in his honor.