Revisit Christmases past at Fort this weekend 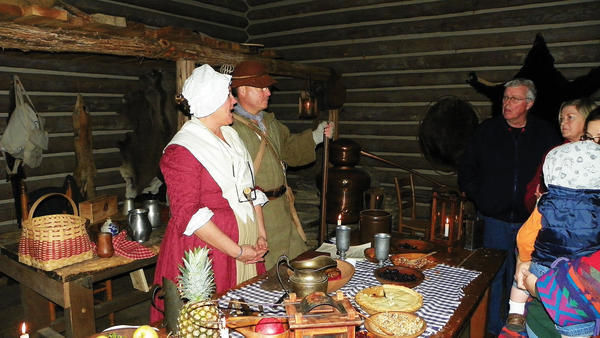 The park’s annual 18th Century Christmas will take visitors back to the early years of the frontier in Kentucky to explore the traditions immigrants brought with them from Europe. The park and the Fort Boonesborough Foundation have partnered for eight years to create the Christmas event.

“We’ll have a German cabin this year to demonstrate how German immigrants celebrated Christmas,” park manager Rob Minerich said. Other cabins will focus on Dutch, English and Irish traditions, he said.

There will be bonfires inside the fort tonight and Saturday afternoon to keep the cold temperatures at bay, and the cabins will be lit by candles. There will also be re-enactors in period costume to discuss the customs of the time in each cabin, he said.

There will also be a group firing period rifles in celebration of the holidays.

“It’s the old single-shot flint lock rifles,” Minerich said. “Every year it surprises me and catches me off guard.”

Another cabin will feature woodworking and Christmas ornaments, and the block tavern will have cider and refreshments.

The choir from Model Laboratory School in Richmond will perform Saturday afternoon as well, he said.

“It probably won’t be period and traditionally correct, but we will have a Santa Claus for the kids,” he said.

The event is a true partnership between the park and the Foundation, Minerich said.

“They make all this possible. We couldn’t do a lot of the programming at the park without their support,” he said.