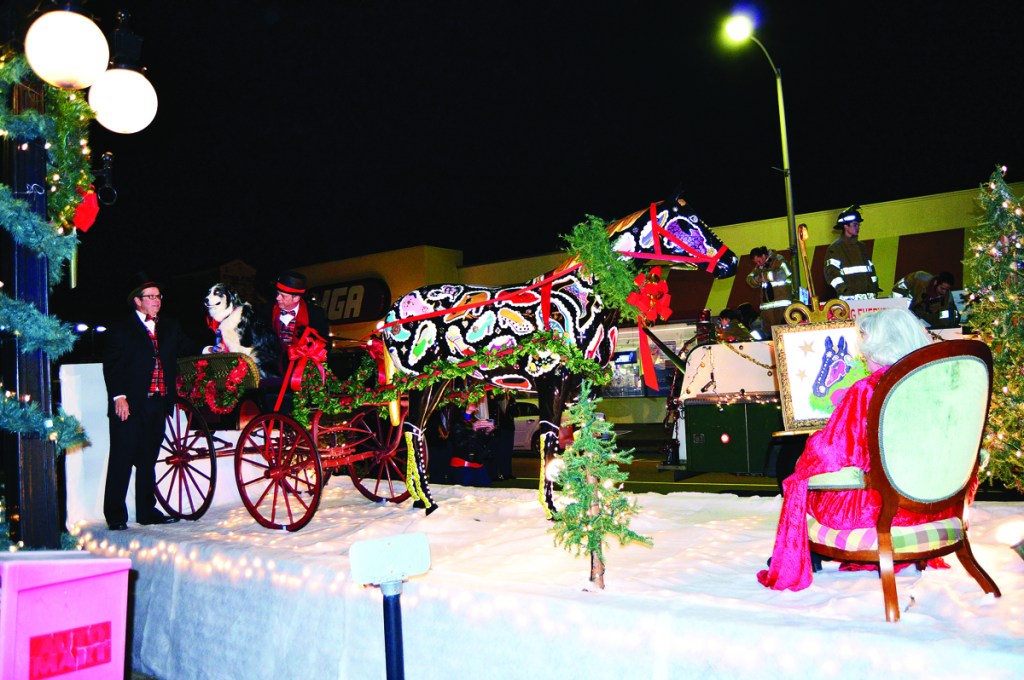 Photo by Melissa Young  Holly VanMeter, seated at right, dreamed of using Horse Shoes, a fiberglass horse she painted for LexArts’ Horse Mania in 2000, along with her great-grandfather’s 19th Century carriage for a Christmas parade float. When VanMeter was named grand marshal of this year’s parade, her friend Mason Rhodus, seated at left in the carriage, made her dream a reality. Also riding on the float are VanMeter’s son, Nelson VanMeter and his Australian Shepherd Dexter.

It took a hand-painted life-size fiberglass horse, a 19th century carriage, a dog named Dexter, a shared vision among friends and a lot of community help to make a dream come true for a local artist.

Holly VanMeter has lived in Winchester all her life and recalls knowing at a young age she possessed a natural artistic talent.

As a little girl, she studied music and dance, but admits she wasn’t “any good at it.”

“I took all those private lessons, and I loved it, but it was not my thing,” VanMeter said with a laugh. “I think my mom had me take piano lessons for every teacher in Clark County. She kept switching me, but no one was able to do much with me.”

Despite her many other lessons, VanMeter said he had very little formal training as an artist.

“When I was going to school, they didn’t teach art in school,” she said. “Sometimes a teacher would see that I could draw and ask me to draw pictures, but art really was not featured in my education.”

At home, though, VanMeter was praised highly for her talent.

“When I was very young, I was arrogant about my artwork,” she said. “My grandmother was an artist, too — there are a lot artists in my family — and would make little scribbles in pencil on a piece of white paper and she would gasp and say, ‘That’s wonderful!’

“So I thought I was great even when I really wasn’t doing much of anything.”

She said she spent most of her time as a young girl drawing and coloring and she would make her own paper dolls and clothes.

“I think I always knew something about my talent, but I never thought I’d make a living of it,” she said. “Back in my day, you got married, had babies and stayed home.”

VanMeter went on to study foreign language at Morehead State University, but didn’t get to much traveling after completing her degree.

“When I went to school, I thought about teaching, but i didn’t get that far,” she said. “I had children and then just did my art from home.”

It wasn’t until she was in her 30s that VanMeter began showing her work. She would visit art fairs and weekend-long shows. Being exposed to other successful artists inspired VanMeter to try making a living of her talent.

“I guess I wasn’t thinking about selling my work at first, I just began showing it in public for the first time around that time,” she said. “Then I met other artists from around the state and realized there was an opportunity to do art as a living. And then, people starting buying it.”

She said the Daniel Boone Pioneer Festival was integral in her early success.

“I was president of the art guild the year it was formed and it just artists gathered around the courthouse,” she said. “I sold a lot of stuff there.”

Her work as been displayed around the state, in Georgia and Ohio.

She was chosen by LexArts to decorate two Horse Mania fiberglass horses. In 2000, area businesses and organizations sponsored 79 fiberglass horses that were decorated by local artists and served as public art in downtown Lexington. This was when “Horse Shoes” was born.

“I named her Horse Shoes because I painted ladies shoes all over her,” VanMeter said.

The horse was auctioned off at Keeneland, in the same style as race horses. VanMeter’s friends and family surprised her by raising the money to buy her horse and return it to the rightful owner.

Holly went on to paint another horse for the sequel to the project in 2010, “Bewitched,” which now resides at the Clark County Public Library thanks to a donation for Sarah Healy, owner of several central Kentucky McDonald’s restaurants, including the WInchester location.

“I was one of the lucky artists to have my horses returned to Winchester,” she said. “I was so excited because I love those horses and I got attached to them working on them into the late hours of the night.”

Two books were published depicting the project, and it was flipping through one of those books at another local artist’s reception that VanMeter met and clicked with Mason Rhodus, a local business honor and downtown revitalization activist.

Rhodus’ husband, Jeffery Hale, designed a horse for the 2010 Horse Mania project along with his art students at Harrison Elementary School in Lexington.

VanMeter and Rhodus bonded instantly and a friendship was formed.

When VanMeter was selected as the grand marshal for this year’s Christmas parade — the theme this year was “The heART of Christmas” and celebrated local makers — the friends discovered they had a shared vision for Horse Shoes.

But, it would take a carriage that VanMeter admired since her childhood to make the dream a reality.

VanMeter recalls sneaking into the shed on her family farm as a child to admire a 19th century carriage. It had been neglected and fallen into disrepair.

“The carriage was sitting on my family’s farm the whole time I was growing up,” VanMeter said. “I would go in the shed to find it just rotting away.”

As an adult, VanMeter acquired the carriage with hopes of one day returning it to its former glory.

About 20 years ago, she was able to restore the carriage.

“I had a guy working for me who could restore the carriage,” she said. “It was in awful shape and it took a lot of work to restore it. We even sent the wheels off to the Amish to have them redone.”

Once Horse Shoes came into the picture, VanMeter admits she had a self-kept secret of one day uniting the two cherished possessions as a float in the annual Christmas parade.

Much to VanMeter’s surprise, when she was announced as grand marshal, Rhodus called her and quickly shared a similar vision.

“I had the desire to do a float because I don’t recall many floats being in previous parades,” he said. “I was sad about that, because I grew up where there were 30 floats in the parade each year. The day I found out Holly was going to be grand marshal, it all popped in my head.”

Rhodus understood how much his dear friend cherished her carriage and her horse.

“I love things like that. I admire things that have been refurbished,” he said. ‘I just said ‘We’ve got to do a float and it has to have your carriage displayed with Horse Shoes pulling it.

“As Holly VanMeter the artist, I was not about to let her ride in a convertible anything in the parade.”

VanMeter’s son, Nelson VanMeter, donated a farm trailer to carry the float. The city of Winchester offered them the city garage as a work space, and for a week, VanMeter’s friends and family worked to make her dream a reality.

The only problem was VanMeter realized she wasn’t able to get inside the carriage with Rhodus.

“I knew at the point, we just have to have her doing what she loves, what she’s known for,” he said.

So, VanMeter acted as if she was painting a portrait Horse Shoes as Rhodus waved to parade-goers from the carriage.

That extra space in the carriage? Well, VanMeter’s grand-dog, Dexter, an Australian shepherd, took over and sat pretty for the crowds.

“We didn’t know how he was going to do,” VanMeter said. “But he just sat like a model the whole time.”

“This was a private dream I’ve had for many years and all those people helped bring it together,” VanMeter said. “It all fell together this year. I would have never been able to do this by myself.”

Fpr Rhodus, it was all about make a friend’s dream come true.

“I’m proud that after 20-something years, I was able to make that happen for her,” he said.