Nailed It or Failed It: Looking for a man? Try this chicken recipe 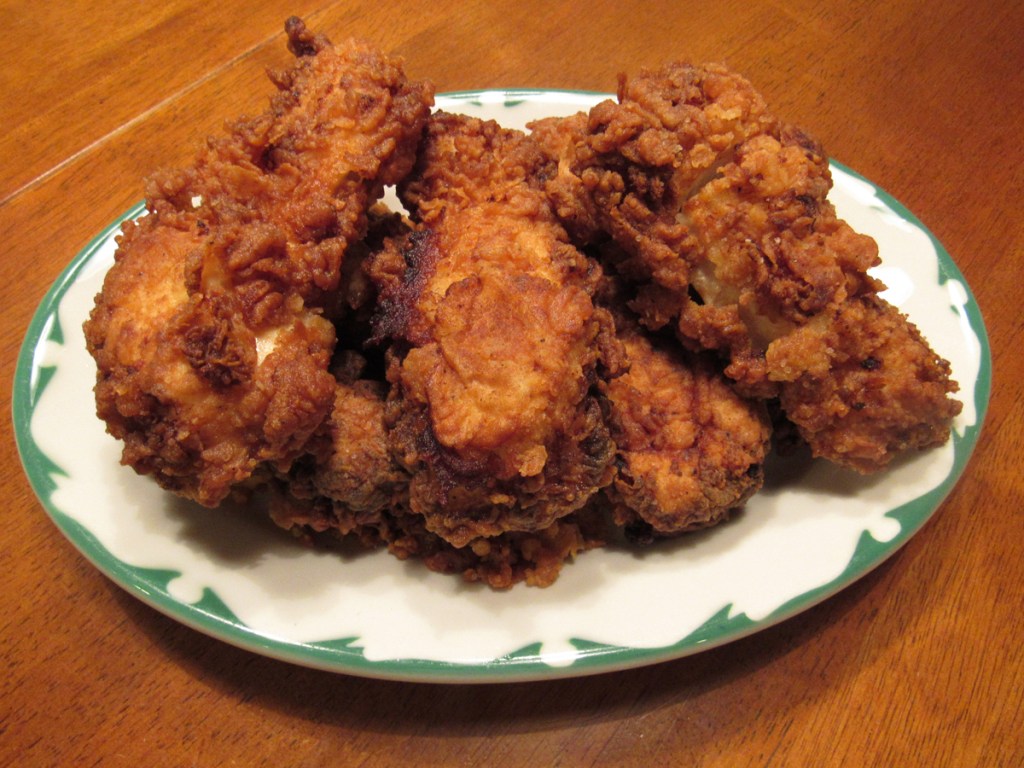 Who doesn’t love fried chicken?  Nobody that I know of.

I grew up eating the best fried chicken ever, in my opinion. My Pa Floyd made the best. Then my Granny Tavie (Pa Floyd’s wife) and my Granny Gibson (my dad’s mom) tied for second best chicken fryer.

Me? Well I’ve never been able to fry chicken. Oh, I’ve tried and tried, but it never has any of that wonderful golden crust when I get finished.

A long time ago, I called Granny Tavie and she gave me the instructions over the phone and I tried it. The chicken got done, but it wasn’t like hers.

When I complained to her it didn’t have any crust on it, she suggested I use my cousin Vickie’s coating mixture, which consisted of flour and cornmeal instead of just flour. I tried that, and again I failed to get any crust on it.

After those failures, we agreed I should just go to granny’s house and we’d fry some chicken together. I followed her every move and still mine had no crust on it. Finally, after frying several pieces of chicken, she kind of threw up her hands and said “I have no idea what you’re doing wrong.” And I gave up.

I didn’t need to catch a man, but thought the title was cute.

I didn’t follow this recipe exactly. Instead of using bone-in chicken, I used boneless chicken breasts.

Before I left for work, I cleaned the chicken breasts and covered the meat with the buttermilk and egg mixture.

I did not use a 9×13 dish, I just put everything in a big bowl.  Because I was leaving for work, I didn’t turn the chicken after 30 minutes either. I figured since it was all submerged in the buttermilk and egg mixture, it was fine.

After work I was nervous and excited about trying to prepare one of my favorite things.

The recipe calls for self-rising flour. I had a little, but not enough, so I made my own (1 cup all-purpose flour, 1-1/2 teaspoons baking powder and1/2 teaspoon salt).

I read the recipe and got started making the flour coating.

When I came to the part to add a tablespoonb of salt, I hesitated since I’d already added a teaspoon to the two cups of all-purpose flour turning it into self-rising flour.

But after a few seconds of pondering, I poured in the salt.

All of my grandparents used a cast iron skillet to fry their chicken, so I decided that’s what I needed to do, too. It made me feel good that I was going to get to use my granny’s skillet again (I used it when I made the skillet cookie a couple of weeks ago) after it had been sitting in the bottom of my cabinet for a long time.

I poured the recommended amount of oil into the pan and turned on the stove. I wasn’t sure how to tell when the cooking oil was hot enough, so I got out a cooking thermometer.

When my granny was trying to teach me how to fry chicken, one thing I remember her saying was you had to have your grease hot and it needed to stay hot to get a good crust on it.

I also remember her saying not to turn the chicken a lot, just be patient and let it cook.

When the oil finally got to 340 degrees, I added my first piece of chicken. It started sizzling. I added more chicken to the pan, and then I watched the chicken sizzle even more and watched the temperature go up to almost 370 degrees, so I turned the heat down a bit and waited. I didn’t take my eye off that chicken or the thermometer. I was scared the chicken was going to get too brown before getting done.

When I turned the chicken, the first few pieces did get quite brown. I sat them on a wire rack to drain over paper towels then put the pieces in the oven to stay warm. In the meantime, I added more chicken to the pan while watching the thermometer.  Again, everything was sizzling and it was looking like I was getting crust on the chicken.

While frying the chicken, I caught myself reading parts of the recipe over and over. I was so scared I was going to miss a step or do something wrong.

I ended up frying all the chicken in three batches instead of two. I’ve heard and read that when cooking meat, you don’t want to crowd the pan. I had plenty of time to get the chicken cooked before supper, so I just took my time.

When I removed the second batch of chicken from the pan, it wasn’t as brown as the first batch, but I wasn’t sure it was done. Before placing it in the oven to stay warm, I cut into a piece. I wasn’t convinced it was completely done, but I figured it would continue to cook a bit in the warm oven. So I just continued.

When all of the chicken was done and I was thinking about getting everything on the table for supper, I remembered this chicken is supposed to have a glaze poured over it.

That part of the recipe I had not been reading over and over.

Since I didn’t fry 4-1/2 pounds of chicken, I decided to cut the glaze recipe in half.

I melted the butter, whisked in the honey and added the pecans.  I cooked the mixture until it began to thicken and then we were ready to eat.

While pulling the chicken out of the oven, I commented to Brad that I thought I’d burned some of the chicken. He looked at it and said “it will be OK.”  Which I knew meant, “Yeah, I think you did.”

I put the chicken on a platter (brownest pieces on the bottom) and we headed to the table. We decided not to pour the glaze over all of the chicken, we’d just put some on our individual pieces.

After praying, we both got a piece of chicken (not the burned ones). I spooned a little glaze on top of mine, but Brad took a bite first. I cut into my piece;  it looked done, and I took a bite — success!

I could not believe it. I had crust and the chicken tasted great, though a little salty.  Brad and I agreed the glaze balanced out the extra salt and we both enjoyed our fried chicken.

I’m sure Granny Tavie was watching from Heaven smiling and saying “It took you long enough, but I knew you would eventually do it.”

I naioled this recipe and can’t wait to make it again.

Next time I’ll use less salt and try not to let it get so brown.

By the way, If you are in the market for a man, this recipe just might be your key to finding one.