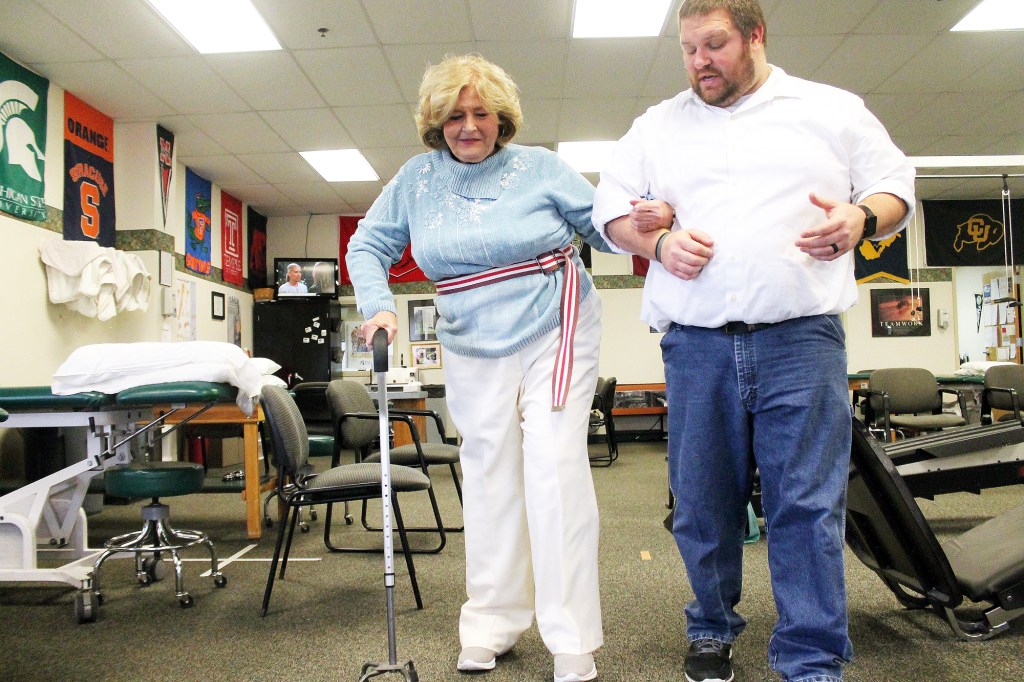 Photo by Whitney Leggett Janet Johnson works on walking with one cane with her physical therapist, Dustin Golebieski, center manager at Drayer Physical Therapy. Johnson is re-learning to walk for the second time in her life after she suffered nerve damage to her left leg after a hip replacement. She also learned to walk again after she suffered paralysis to her right leg when she survived polio as a five-year-old.

When she was six years old, Janet Johnson found herself waiting for a miracle.

She stood, balancing on crutches in front of shelves lined with yellow shoe boxes in her papaw’s general store in Elliot County.

With a penny loafer next to her right foot, she prayed for her crutches and the brace on her leg to crumble.

It was October 1953 while in her first-grade classroom when Johnson became ill.

“I became deathly sick to my stomach and threw up in the classroom,” she said. “My parents kept me home from school for a few days and I was not getting any better.”

Johnson said her parents became alarmed when her right leg began giving out as she walked causing her to fall.

“They took me to the doctor, and I can remember his exact words,” she said. “He said ‘I think she has polio, get her to Lexington as quickly as possible.’”

Her parents rushed home and dressed her.

“My grandfather had given me a pair of penny loafers from his store just a month or so before,” Johnson recalled. “I loved those penny loafers and I wore them to the hospital, not realizing at the time that I’d never get to wear them again.”

The doctor’s diagnosis was confirmed.

Polio is a crippling and potentially deadly infectious disease. It is caused by the poliovirus. The virus spreads from person to person and can invade an infected person’s brain and spinal cord, causing paralysis. In 1952, approximately 58,000 cases were confirmed in the U.S. The highly contagious virus mostly affected young children and the Salk vaccine for polio wasn’t made available to the public until 1954-55.

In the U.S., the last case of naturally occurring polio happened in 1979, according to the Mayo Clinic.

Johnson spent two and a half months at Cardinal Hill Rehabilitation Hospital learning how to walk again using a brace and crutches.

A couple months after returning home, Johnson was at home listening to a sermon with her mother one Sunday afternoon. The preacher’s words resonated with her.

“He said, ‘God can heal you,’” she said. “The wheels started turning and I began to think that God can heal me.”

She begged her mother to take her to her papaw’s store, which was adjacent to  their house.

“At first she didn’t want to go, but finally she relented,” she said. “As you walked into the store, to the right there was shelves lined with yellow shoe boxes. In some of those boxes were penny loafers like the pair I wore to the hospital. I thought the proper place for the Lord to heal me would be in front of those shoes.”

Johnson stood waiting for her crutches to fall off, but when nothing happened, she decided she needed to show God she was serious.

“I got a pair of the penny loafers and I gingerly took them out of the box, laid them next to my foot, and I waited for that brace to fall off and those crutches to crumble. But, again, nothing happened.”

Johnson didn’t get her miracle that day, but about two years later, she learned to walk without the crutches, and when she was 15, she had several surgeries at Shriner’s Hospital for Children.

“I did get to eventually leave the brace behind,” she said. “But polio has affected my life ever since.”

Johnson, now 68, went on to college at Morehead State University and taught in Greenup County for 31 years. She substituted for two years after retirement and then returned home to her parents’ house to care for them until they passed away.

Over the years, compensating for the weakness in her right leg caused Johnson’s left hip to deteriorate.

“I did really well for several years,” she said. “The last 25 years, because of so much strain on my body as the good part compensated for the weak part, it took its toll and I had to go back to wearing a brace.”

Ten years ago, Johnson had her left hip replaced

“Almost five years after the hip replacement, the ball in my left hip popped out of the socket and went behind my hip,” she said. “I had emergency surgery. In the process of trying to retrieve that ball, the doctors bruised my sciatic nerve.”

Johnson’s left leg was numb from the knee down and she lost control of her foot.

“That wouldn’t have been so bad in itself, but that was my so-called ‘good leg’ because my other leg was paralyzed from the polio and I was wearing a brace at the time,” she said.

Johnson had moved to Winchester to be closer to her sister and niece, and would find herself at Cardinal Hill re-learning to walk for the second time in her life.

“After I was released from St. Joe hospital in 2012, I didn’t know if I’d even be able to walk because I didn’t have a strong leg,” she said.

When she was able to go home, she started seeing physical therapists at Drayer Physical Therapy in Winchester.

“I came here in a wheelchair,” she said from the clinic located on Pedro Way. “Through therapy, I learned to use a walker fairly well. Then, I was released, but I continued to visit for wellness.”

About a month ago, Johnson began having arthritic pain in her shoulders, neck and back, as a result of the strain on that part of her body through using the walker.

“I was putting so much pressure on my shoulders and it was so painful I was getting to the point I didn’t know I’d be able to continue walking even with the walker,” she said.

The center manager, Dustin Golebieski, began working with Johnson to see if he could improve her balance to relieve the pressure. The pair eventually discovered Johnson may again one day walk without the support of a walker.

“I watched her walk and realized she wasn’t utilizing her hips and legs as much as needed to,” he said. “I think that was mostly out of fear. I got her on the table and saw that she wasn’t able to turn on the right muscles, but she still has use of her legs. I wanted to see if we could get those things doing what they needed to with more stability.”

Golebieski applied an aggressive approach, starting with balancing without holding onto something. They moved on to walking in place with stationary balance and then switched to two canes.

In just three weeks time, Johnson is now able to walk well with only one cane and for the first time in five years, has taken steps without any support from a walker.

“Realistically, I think she probably had the ability to do this, I just think she hadn’t tried because she was used to the walker and there was a fear there,” he said.

Johnson said she believes she finally got the miracle she waited for as a little girl in her papaw’s shop.

“I do think this is a God thing,” she said. “Before this plan, I think I had just become complacent with my physical condition and just accepted it. Deep down I always knew God would see me through, but I guess I was hoping for something supernatural, where I wouldn’t have to exert much effort, where he would just say ‘Janet, you’re healed.’”

Golebieski said he thought her recovery would take much longer.

“Three weeks ago, we did not anticipate that she would be walking with just a cane,” he said. “At this point, I think that’s the least restrictive thing she’ll need. But I want to say I can get her walking without anything. I do think it will take a little while, though.”

The nerve in Johnson’s left leg has partially regenerated and she sees a brighter future for herself thanks to the team at Drayer.

“It will mean freedom,” she said. “Right now, it seems unreal. I don’t think it has registered. I’ve been in this mode for so long and if you’ve never lost your independence, you tend to take the ability to walk for granted. This will be an ongoing process, but it gives me hope.

“The staff here as been so encouraging. They are my biggest cheerleaders aside from my family. I can’t sing their praises highly enough.”