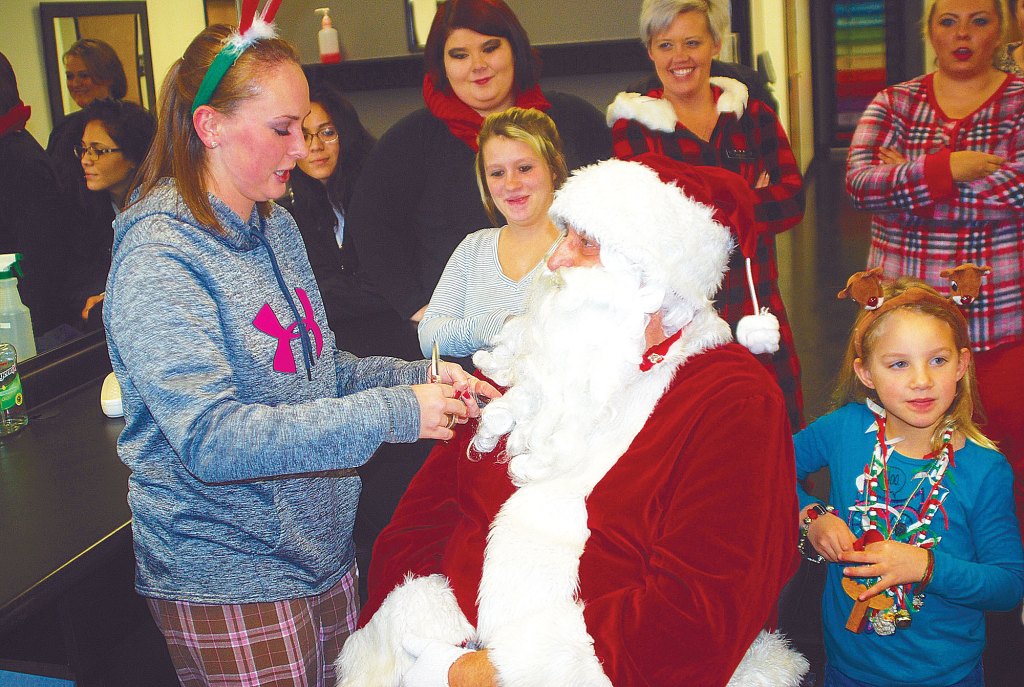 Photo by Fred Petke Santa Claus stopped by the College for Technical Education Monday afternoon for a quick trim of his beard by student Caitlyn Beckman before continuing with his preparations for Christmas.

Father Christmas himself took time out of his busy holiday schedule early this week to visit Winchester. Santa went by the College for Technical Education to get a beard trim before the big night. During his visit to Clark County, Santa granted an exclusive interview to The Winchester Sun’s staff.

When asked how preparations are going for Christmas Eve, Santa said it’s been a good year.

“Things are going very well,” St. Nick said. “We’re looking forward to a big night. We’ve had the elves working as hard as they can and we feel like we’ll have a big night on Christmas Eve.”

He said, overall, he was impressed by how good the boys and girls of Clark County have been over the pst year.

“They have tried,” he said. “I’ve been out and visited with a lot of boys and girls and they give me good reports.”

Santa said the most requested present this year has been  portable electronic devices, which seem to increase in popularity every year.

However, there are still plenty of requests for more traditional gifts, like dolls and bicycles, Santa said.

“We see young people wanting more cell phones, video games and computers of all sorts, so you see more of an emphasis in the toy-creating world in that area,” Santa said.

Santa said he has been training extra hard with his reindeer this year in preparation for bad weather in the upper northwest.

“They’ve been working extra hard to get ready, but I think they’ll be good to go on Christmas Eve,” Santa said.

When asked what his plans are for after the big night, Santa said he will take a short break before it’s back to work for the next year.

Santa will make an appearance at Emmanuel Episcopal Church to meet Winchester residents at Operation happiness today before returning to the North Pole to map out his delivery route.