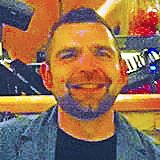 Winchester residents who enjoy watching horror movies may be surprised to find a familiar name in the credits of a new anthology coming out soon.

Rick Baldwin, president of the Winchester-Clark County Film Society, earned an executive producer’s credit for his work on “Volumes of Blood: Horror Stories” earlier this year.

Shot entirely in Owensboro and created by a cast and crew predominately from Kentucky, the movie is an anthology featuring several different short stories from various directors.

The film is a sequel to the original 2015 “Volumes of Blood,” which despite its humble origins, was distributed worldwide.

Baldwin said anthologies are popular among many horror fans, and they are seeing a resurgence of sorts since they first gained popularity in the 1950s.

In “Volumes of Blood: Horror Stories” each director brings a unique tale to the film, with a common thread linking the short stories.

“A strength of the platform is that you get used to the short film format, but you still get to release a feature-length film,” Baldwin said. “We’ve all been in movies before where you think ‘this movie is longer than it needs to be.’ It’s a good format for horror movies.”

As an executive producer, Baldwin said his involvement in the film was centered on the business side of production rather than the creative side. His duties involved making sure the funding for the film was sufficient and seeing to it that the producers and directors had the resources they needed to complete filming.

Baldwin said between the cast and production crew, about 100 people took part in the making of the film over the course of a year.

The anthology was recently reviewed by Fangoria — a popular horror movie magazine — and listed as one of the top 10 horror films of 2016. Baldwin said the review was seen as an honor by the people who worked on the film.

Baldwin said he hopes the film will inspire other potential filmmakers in the state.

“When people think of filmmaking they tend to think it can’t happen in a community like this,” he said. “But good filmmaking is not about waiting for the planets to align. Most films happen just by people going out and doing it.”

He said with continuing innovations in technology, anyone who is interested can make a film, even if they are shooting from a phone. For those hoping to break into Hollywood, he said creating a film and submitting it to festivals or companies willing to distribute it is more likely to be successful than just writing a screenplay and attempting to sell it.

Baldwin said “Volumes of Blood: Horror Stories” producer P.J. Stark is currently working on a distribution deal for the new anthology, but Winchester residents may have the opportunity to see it locally at a film society screening in the future.