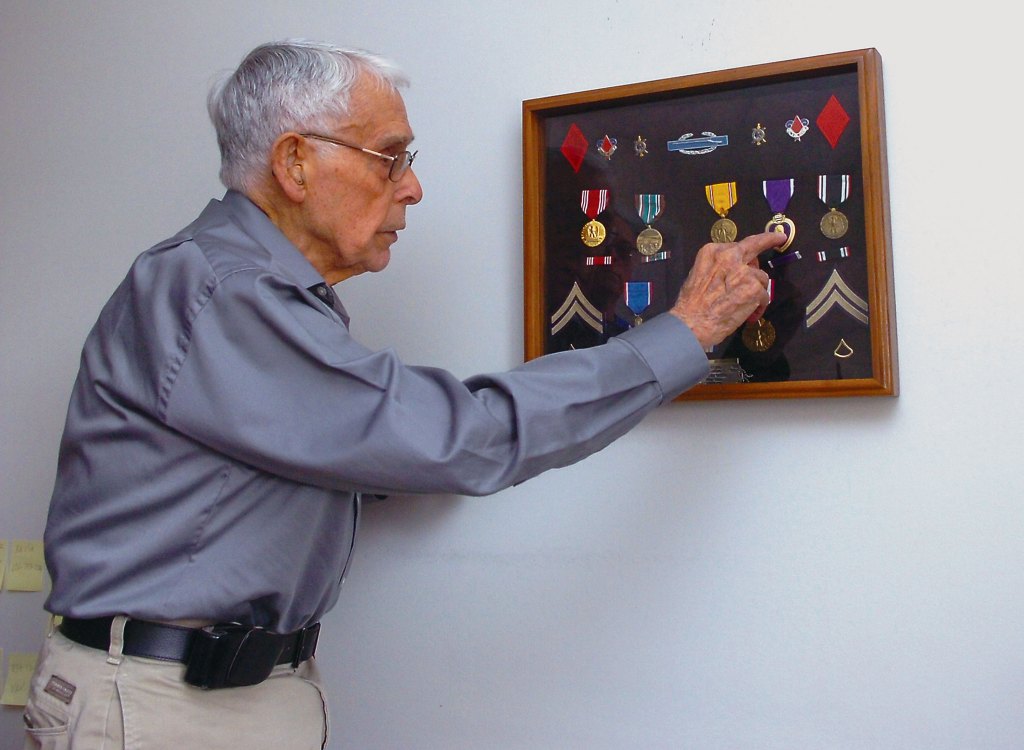 Photo by Seth Littrell World War II veteran Elwood Ramey points to the Purple Heart he received after being wounded during service.

Few, however, may realize they are in the presence of a highly-decorated veteran who fought against Nazi Germany not only as a soldier, but also as a prisoner of war.

From 1940-45 Ramey, like millions of other men and women, put his life on hold to be a part of the U.S. war effort during World War II.

Ramey served as a machine gunner with the 10th infantry, fifth division. He would have been a tail gunner on a bomber, but was disqualified from the job because he was colorblind.

He enlisted before the Japanese navy bombed Pearl Harbor, and he remembers being stationed in Iceland when he heard the news about the attack.

“I was overseas when it happened,” he said. “I had been there about two or three weeks.”

After the U.S. officially entered the war, Ramey and others were sent to northern Ireland and England to train for the eventual invasion of Normandy, according to Ramey’s son Van Ramey.

Ramey — known as “Woody” to his comrades — fought his way across France as a part of the allied forces.

“My dad was a World War I veteran,” Elwood Ramey said. “And here I was, 20 years later, in combat with the same country.”

As the army marched forward through German resistance, Ramey gained a reputation as a crack shot and an effective machine gunner.

“I would fire one shot at a time,” he said. “And (the Germans) would think there was only one rifleman shooting at them so they would come up to attack and I would open up on them.”

The allied offensive moved steadily across France until it came to a series of forts around the city of Metz the Germans were determined to defend in order to keep the allies out of Germany.

One such fort was Fort Driant, which the army tried unsuccessfully to take in late September 1944.

“A panzer tank division beat them back,” Van Ramey said. “They left (Elwood Ramey) there to call in airstrikes on Fort Driant, knowing he would get killed or captured.”

Ramey was given a radio and ordered to man a small station named King Outpost by himself. From his vantage point, he could call in airstrikes on troop positions as well as German tanks in the area.

King Outpost remained operational for three days before Ramey was captured by the Germans.

“I woke up one morning and heard something that sounded like an old mess truck,” Ramey said. “So I got up and started looking around and heard someone digging. Well about that time, a German soldier started yelling ‘arms up, arms up.’ They were digging foxholes.”

The soldiers captured Ramey and transported him to Stalag Vii-A, Germany’s largest POW camp during the war in what was then southern Bavaria. He spent nearly 10 months at the camp and was forced to work in a factory.

However, Ramey’s capture did not stop him from fighting back in various ways, including sabotage.

“I destroyed an entire factory,” he said.

One of Ramey’s assignments was to sweep up the floors in a factory where heavy machinery was welded together. He said one day he took the remnants of several used welding rods and dropped them into the oil tank of the motor that made the machinery run, making the whole factory inoperative.

Fortunately for Ramey, he said the Germans never seemed to figure out what had broken the motor or who was responsible, and he survived until the camp was liberated on April 29, 1944.

Many of his commendations came in the field, and his actions were verified by military personnel who found records of them in a diary kept by one of his commanding officers.

He began working as a machinist and later worked doing demolitions for highway construction.

“He worked hard all his life,” Van Ramey said.

Van Ramey said his father didn’t collect any of the Veterans Affairs. benefits he was entitled to until he was 82 years old and could no longer afford to get his medication himself. He said when asked by VA representatives why he didn’t get his benefits sooner, his father said “other people needed them more than I did.”

Since then, Van Ramey said his father has received the best of care from the agency, with his POW status placing him at the front of the line whenever he needs care.

“A lot of people have legitimate gripes about the VA,” Van Ramey said. “But they have always taken care of this man.”

Ramey also gets support from his faith. He has read the Bible many times over and calls it “the history of God’s people.”

Van Ramey said his father is the only man he knows who has read the entire Bible cover to cover, because he underlined each line as he read it.

Ramey said it took a long time for him to be comfortable talking about what he had seen and done during the war, and he has only really opened up about it within the past 10 years.

“It used to be that when I would talk about it, I wouldn’t be able to sleep at night,” he said. “Now so many years have passed by that I don’t care to talk about it.”

Van Ramey said he never heard anything about his father’s service until he became an adult, and what he has learned has given him a new perspective on who his father is.