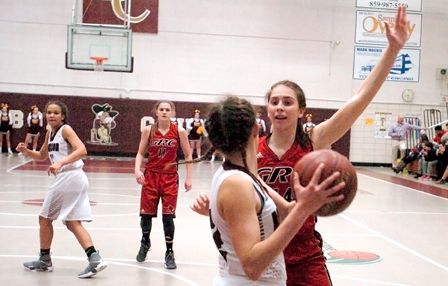 But it was too late.

GRC had built a 25-6 lead in the first quarter and never looked back, even as the fouls start piling up. The Cardinals were 72-50 winners despite allowing the Colonels 28 free throws.

“We were fouling way too much and putting them on the free throw line,” GRC coach Robbie Graham said. “Our defense wasn’t very good tonight. We played hard and competed, but defensively we didn’t play as well as we are capable of playing.”

The Cardinals were whistled for 25 personal fouls and 15 of those came in the first half. Maleaha Bell, Hayley Harrison an Shemaya Behanan had three fouls before halftime.

“We started coasting a little bit and our intensity on defense wasn’t there,” Graham said. “We were fouling and reaching instead of playing defense with out feet and staying in front.”

Lots of players saw the floor for the Cardinals not just because of the big lead and early fouls, but because the team is looking to improve its depth, Graham said.

“We’ve got some kids who are playing better in practice and getting better so we’re trying to strengthen our bench a little bit so we can give more kids more rest,” Graham said.

As the Cardinals refine their full-court pressure, they want to reach father down the bench.

Despite the foul trouble, Harrison finished with a game-high 21 points. Jasmine Flowers had 18 and Kennedy Igo put in 15. Bell finished with eight points and Behanan seven.

GRC improves to 12-2 on the season and 2-0 in distrct play. The Cardinals travel to Franklin Couny for a rematch with Green County Saturday before hosting Montgomery County at 6 p.m. Jan. 13.