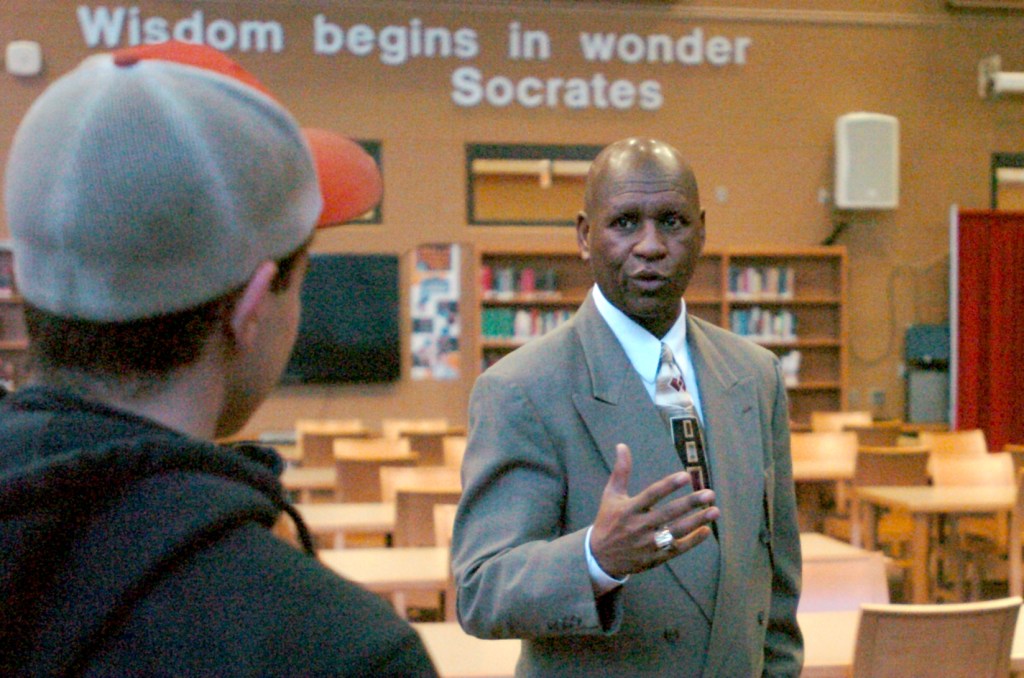 Dr. Oliver Lucas speaks with a student in the GRC school library before being introduced as the new football coach Thursday. (Photo by Casey Castle.)

During a press conference at the school Thursday, Oliver Lucas was named the head of a program that’s seen better days.

“We need to summon the forefathers from the walls so we can get this program back,” Lucas said. “It’s up to me to draw them out.”

Lucas stepped down as coach of DuPont Manual at the end of the 2015 season after six years. Oliver rebuilt Manual, enjoying a 44-24 record during his time there. He was 44-9 against teams that weren’t Male or Trinity.

Lucas has coached at the high school and college levels. As a prep coach, he’s 173-73 overall and won four state titles as a head coach or assistant. As a college assistant, he was part of two Big 8 title winners, one national championship and one Orange Bowl win.

As lofty as his coaching credentials, Lucas was selected just as much — if not more so — for his reputation as an educator, GRC athletic director Jamie Keene said.

Lucas has a BA in biology, a MA in education administration and a PhD in leadership and management.

“We’ve chosen a proven rebuilder, a proven motivator and a proven winner with a track record of success,” Keene said. “He’s twice been named teacher of the year. He will tell you he’s an educator who coaches.”

Keene said he hoped Lucas could be a presence in the school as soon as the paperwork is finished.

Lucas, who compared his offensive style to that of Clemson’s Dabo Swinney, takes over a program that has won just once in the past two seasons.

“My vision is that on Friday nights this is the place to be. Exciting football is happening  at the stadium — standing room only, wall-to-wall, elbow-to-elbow,” he said. “We need to put the swag back into GRC. And that’s what I’m about.”