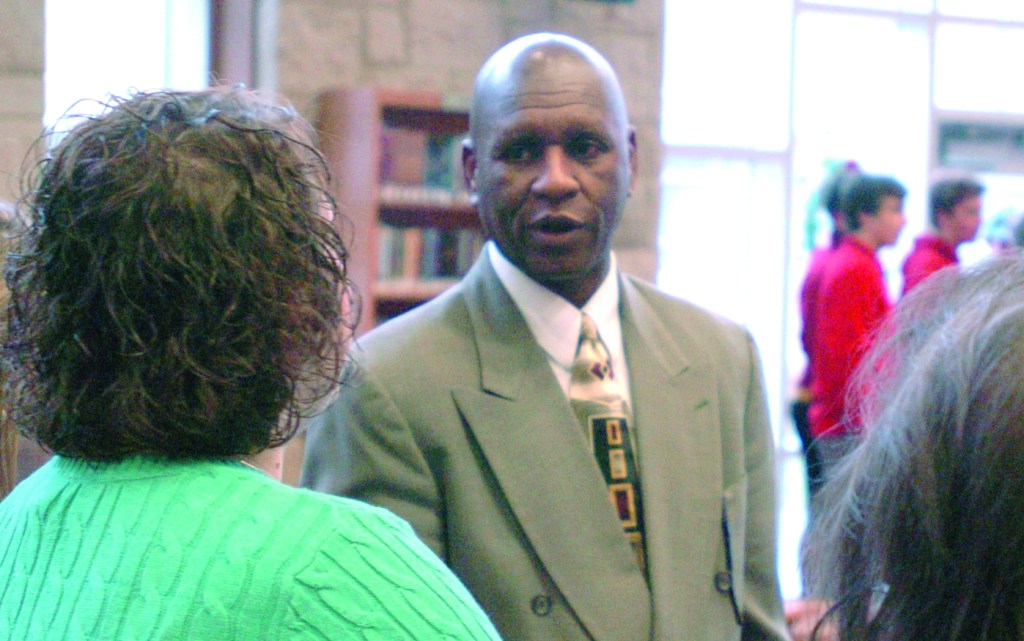 When Oliver Lucas was announced as the new George Rogers Clark High School football coach, he listed off all the things he’s excited about.

But most of all, Lucas said, he was excited about the team’s colors.

“Whenever I’ve coached or took a job where the colors were black and red or red and black, it always showed up winning instantaneously,” he said. “When I look for a job, I get a little fickle sometimes and I say, ‘What are the school colors?’”

While Lucas might not have been entirely serious, fans and supporters of GRC football certainly took that as good news.

After all, what could be better for a team with just one win in two seasons than winning as soon as possible?

That will be the expectation, Lucas said.

“Wherever I go, I’m about getting things done now,” he said. “If a person tells you, ‘It will take me three, four, five years to build a program’ you shouldn’t hire that person. You have to be a person of action now. People should see things happening now.”

That goal is attainable. GRC’s schedule next season is far more favorable than its previous slate. The progam is blessed with some younger players — sophomores pressed into action last season as the Cards battled injuries and members of a successful freshman team. The Cardinals had 10 juniors on the roster in 2016.

And Lucas is suited for the job of turning around struggling programs. He made DuPont Manual competitive during his six years there.

“We chose a proven rebuilder,” GRC athletic director Jamie Keene said. “He’s a proven motivator and a proven winner. We can not wait to see his energy and his passion take our program where it needs to be.”

Lucas has had previous stops at Bryan Station and assistant coaching positions at the collegiate level.

GRC was attractive because unlike his past two high school coaching jobs, it is the lone football progam in the community.

“I’ve always wanted to be at a school where it’s just the one school and everything feeds into it,” he said. “When you have a community-based school it’s just a plus. I want to be part of a program that once had a rich tradition and needs to have it resurrected.”

GRC has had its recent struggles, but the school boasts a state championship and undefeated season with the 1991 team. Former Cardinal Yeremiah Bell was an NFL Pro-Bowler in 2009.

In the search for a new coach, the school district’s facilities plan could have been a help or a hindrance.

There is no football field at the new high school building and games are played at Cardinal Stadium on Campbell Junior High’s campus. But a brand new field is on the horizon.

For Lucas, none of that mattered.

“I never look at a program like that,” he said. “I go in and look at what’s there, and I work with that. The hand that you deal me is the one I’m going to play with. I’m not going to complain. I’m going to roll up my sleeves and get it done.”

Focus on the players

Lucas said the system and the program were what mattered because they focus on the most important aspect — the players.

“If it doesn’t meet the individual needs of every player then you’ve failed the kid and you’ve failed the program,” he said. “I’m going to meet their needs individually and prepare them maximally to go on and reach their goals whatever their aspirations are.”

One way Lucas focuses on the players that most other coaches don’t is an annual visit to a college campus. He takes the team away for a weekend to see a university.

He said the players don’t just tour the school, but are on the field while the team practices.

His most recent trip was to Ohio State.

“Urban Meyer came over and spoke to the kids then had them start doing some drills,” Lucas said.

Lucas said the team will always visit and meet with local schools but he tries to take the players outside the state so they will see other things.

“We get away and build some camaraderie,” he said. “They can see exactly what the college life is like.”

Lucas wants to look at the staff at the program now before deciding  who his assistants will be. He said he already has received calls from those interested in joining him in Clark County.

But whoever he chooses will be “hard workers.”

“I’m touchy when it comes to coaches,” he said. “I don’t hire everyone. Not everyone is a coach. Just because you yell doesn’t make you a coach. I’m about teaching.”

Prior to announcing Lucas as the new coach, Keene thanked his nine-person search committee for the time and effort put into the search.

“We gave this process its due diligence,” he said. “They volunteered their time from the posting of the position to the receiving of applications and sorting through those and setting expectations and crtieria and through the interviews.”

There was plenty of interest in the position.

“We had a quality pool of applicants,” Keene said. “It meant a lot to me to see so many people interested in becoming a part of the GRC family.”