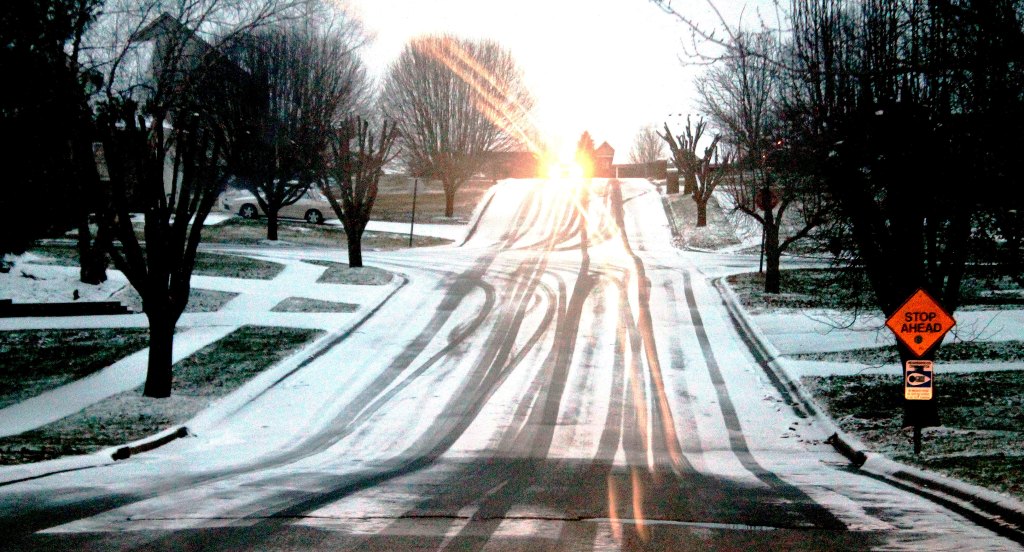 Tracks from cars can be seen in snow accumulation as a motorist comes over the hill on Rose Lane in the Earlymeade Subdivision around 5:30 p.m. Thursday. Snow fall continued throughout Thursday night into Friday morning. (Photo by Whitney Leggett)

Winter weather made its first appearance this year, blanketing Clark County bringing with it about an inch of snow and frigid temperatures Thursday.

County and city crews pre-treated roadways throughout the day and returned at about 3 a.m. today to begin plowing and salting what accumulated overnight.

The weather caused Clark County Public Schools to close for the second day in a row.

The National Weather Service reports that while the bluegrass region will likely not see any additional accumulation, many roadways in the region are still hazardous.

The snow will likely stick around for several days, as temperatures are not expected to rise above freezing until Monday.

Today’s forecast is mostly cloudy and cold, with a high near 19 and wind chill values as low as 2 degrees, according to NWS. Temperatures tonight are expected to plummet to around 4 degrees with negative wind chill temperatures.

This weekend’s high is 23 degrees on Sunday.

Clark County Road Supervisor Kevin Wilson and Pat Clark, director of Winchester Public Works, said the freezing temperatures have been the hardest for their crews to battle.

“The county’s roads are not in bad shape, but the cold air is killing us,” Wilson said. “We went in about 10 p.m. and came back out about 3 a.m. I was out driving the county between that time and it snowed all night. Those cold temperatures are really going to hurt us.”

While city and county roads are passable, Clark said the salt will not take full effect on roads that are so cold.

“The road temperature right now is below freezing,” Clark said. “That makes it tougher to fight. We pre-treated Thursday and that helped us through the night on intersections, bridges, underpasses and hills.”

“We came back in at 3:30 a.m., dropped the plows and continued salting the entire city. Some places are still snow-covered and there’s some ice.”

Clark said the county  didn’t get the forecasted 3 inches as of Friday morning, but cloudy weather forecasted for Friday will prevent melting as well.

“We’re dealing more with the frigid temperatures,” he said. “It might get up to about 20 degrees today and that’s going to be it. I thought the sun might come out and help a little, but it doesn’t look like that’s going to happen. Throughout the weekend it’s supposed to get even colder.”

Clark said even without the melting effect, having salt on the roads can provide traction for drivers.

Wilson and Clark advised motorists to use caution when driving in the city and county.

“People just need to slow down,” Wilson said. “I drove around last night on two-wheel drive and took my time and things were fine. Take your time, give yourself plenty of time to get where you’re going and be careful.”

Wilson said driving in snow is “a forgotten art.”

“You can’t drive on the streets like it’s dry pavement,” Clark added. “We’re on partially wet, snow-covered and ice-covered roads. You have to make adjustments, particularly to watch speeds, slow down, allow stopping distance and be considerate of the conditions.”