Nailed it or Failed it: Cupcakes are crowd pleaser at Christmas potluck 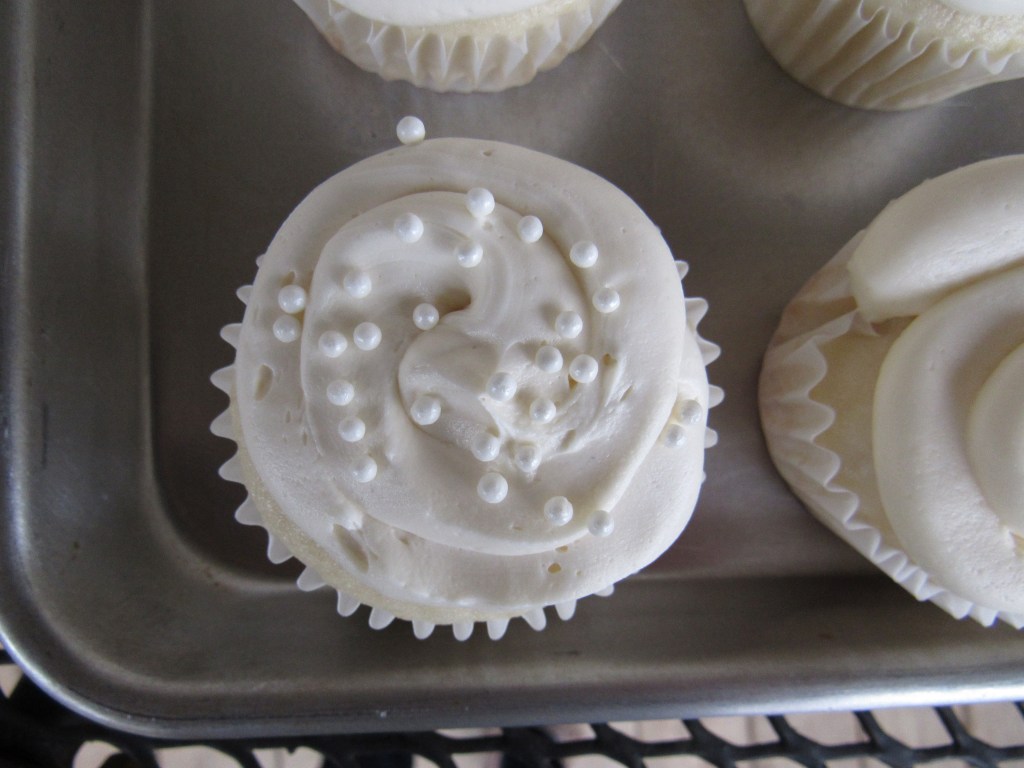 Our Sunday School class voted to have a Christmas potluck luncheon right after church. Because I love to bake, I signed up to bring dessert. My thought was to take something I’d made before (pecan pie cheesecake) but Brad said he thought it would be a good time to try something new because I would have a lot of people to judge if I “nailed it or failed it.”

Now, I was a little hesitant because I didn’t want to end up with a failure at a potluck — how would that look? Before I decided what to make, I found out our class invited our ministerial and office staff, along with their families, to the potluck. That added about 23 people to our list so I decided to make two desserts. After a little thought and searching through my recipes, I decided I’d try making homemade cupcakes and salted caramel butter bars. Of course, both sounded yummy to my sweet tooth.

The cupcake recipe I found used a doctored up cake mix. The recipe is called “White Wedding Cake Cupcakes.” My son got married at our house in September and I had snacks available for the wedding party and family members before the ceremony. The sweet snack I had was some beautiful and delicious white cupcakes I purchased from a fellow church member and neighbor, Vickie. I was hoping this recipe for would come close to tasting like the ones Vickie made, though I knew they would not look as pretty as hers as I’ve never decorated a cupcake. I don’t think I have made cupcakes except once or twice in my life and when I did, they were from a mix, and I just slathered on icing you buy in a tub.

Brad and I were going to attend a business Christmas party the Saturday evening before our potluck so I got started making the desserts right after getting home from the grocery Saturday morning.

I decided to tackle the cupcakes first, since they would need to be completely cool before I could frost them.

Here’s the recipe for the cupcakes and the wedding cupcake buttercream frosting that I found at recipegirl.com.

I only have enough muffin (cupcake) pans to make 24 cupcakes, so I borrowed another pan from a friend. I was going to use both of my ovens to utilize my time wisely.

I decided not to use my stand mixer for these cupcakes because I was afraid I might mix the batter too much and they would be tough. So after whisking the dry ingredients together, I added all of the wet ingredients and beat it with my hand mixer for the 2 minutes stated in the recipe.

I had the cupcake liners in the pan and the oven was preheated, so all I had to do was get the batter in the tins. Instead of using an ice cream scoop, I just poured some batter in each cupcake liner, hoping I’d have enough to fill the 36 liners. I did, but there was more batter in some than in others, so I used a small spoon to try and even out the batter. Then I just popped all of the cupcakes into the oven and set the timer. After 18 minutes, the cupcakes in my lower oven were done but the ones in the upper oven needed a couple of more minutes before a toothpick inserted in the center came out clean. The cupcakes were not brown on top, but they smelled pretty good. I sat them on cooling racks and while they were cooling, I started on the icing.

A note with this recipe said that this icing would frost 12 cupcakes. I thought about going ahead and tripling the recipe since I had 36 cupcakes to ice, but decided I didn’t want to deal with 9 cups of powdered sugar and six sticks of butter in one bowl. I decided to just make one batch of icing at a time. Even though I used low speed on my stand mixer, the powdered sugar went a little wild when I turned it on and the white cloud almost overtook me. At first I wasn’t sure the butter and powdered sugar were going to come together, but with a little patience they did. I then turned up the mixer and let it go for 3 minutes. I did stop the mixer a couple of times to scrape down the sides of the bowl. I then added the vanilla and whipping cream and beat one more minute. The icing looked great and tasted pretty good.

I’ve never used a piping bag and don’t have any anyway, so when the cupcakes were completely cooled, I decided I would try to use a Ziploc bag instead. I’ve seen this done on TV plenty of times and it looks fairly simple: Fill the baggie with icing, snip off one corner and squeeze the icing onto whatever you have made. I slipped a quart-size freezer bag into a measuring cup and folded the top over the cup, thinking this would help and would allow me to use both hands to get the icing in the bag. This worked pretty well, but the icing got all over the top of the bag anyway and all over my hands. Finally, I got all of the icing in the bag and used a paper towel to wipe off the Ziploc part of the bag. I snipped one of the corners of the bag off and tried to squeeze the icing out of the bag. The hole was too little, so I snipped a bit more off and started squeezing. This time, the icing came out perfectly. The only thing I knew to do was just go around the top of the cupcakes and about a third of the way through, my bag got a hole in the side and icing was squirting out so I had to stop. I decided to just get another quart-size bag, transfer the icing, and continue on — easier said than done. By the time I used up all of the icing, I only had about 10 cupcakes left that needed to be iced. I was so thankful I didn’t triple the recipe to start with. I got ready to make a second batch of icing and decided to just make a half a recipe because I didn’t want a lot of leftover icing. Before I started the second batch of icing, I decided I might as well taste test a cupcake to make sure I’d put enough icing on them. Since the recipe stated it would make 12 cupcakes I thought maybe I hadn’t really put enough on each one. One bite and I was sold. These cupcakes were good and, unless you like the amount of icing you get on a Gigi’s cupcake, I’d put plenty of icing on them. The ratio of icing to cake was to my liking.

I made the second batch of icing and finished up the cupcakes. They looked pretty plain so I scoured my baking drawer for some kind of Christmasy sprinkles. I found red and green sugar along with some white pearls. I used all three of those sugary things, sprinkling some of each on top of the cupcakes, which helped cover up the fact the icing I piped on wasn’t real pretty. After I was finished, I thought the cupcakes looked pretty good for my first time.

Brad did take one bite of the cupcake I tasted and thought it was good. But I knew the real test would come at the Sunday School luncheon the following day. On Sunday after everyone had eaten lunch, I watched as they headed to the dessert table. At first nobody was taking cupcakes, I thought well, I guess they don’t look appetizing. Finally people started picking up the cupcakes and I made a mental note of those who had taken one. After people had time to savor their desserts I asked a few people what they thought. David and Bill said, well, the paper liners came off easy — then they said agreed the cupcakes were good. I then headed over to where our preacher’s family was sitting and asked his youngest daughter, Olivia, if she liked her cupcake — she smiled and shook her head yes, her dad said “she sure did like them, she just finished her second one.”

So with Olivia’s blessing, I nailed this recipe and it has been added to my self-made cookbook.

As for those salted caramel butter bars, I’ll tell you about them next week.

In a large bowl, whisk together cake mix, flour, sugar and salt. Add remaining ingredients and beat with hand mixer for 2 minutes, or until well blended.

Use ice cream scoop to fill prepared cupcake tins – fill about ¾ full. Bake about 18 minutes, or until toothpick inserted in center comes out clean.

The recipe states you can also use this mix to make a cake, just pour into greased cake pans and bake until a toothpick inserted in the center comes out clean.

In a large bowl, with a hand or stand mixer, cream together sugar and butter on low speed. Mix until well blended. Increase speed to medium and beat for another 3 minutes.

Add vanilla and cream and continue to beat on medium speed for 1 minute more, adding more cream if needed for desired spreading/piping consistency.