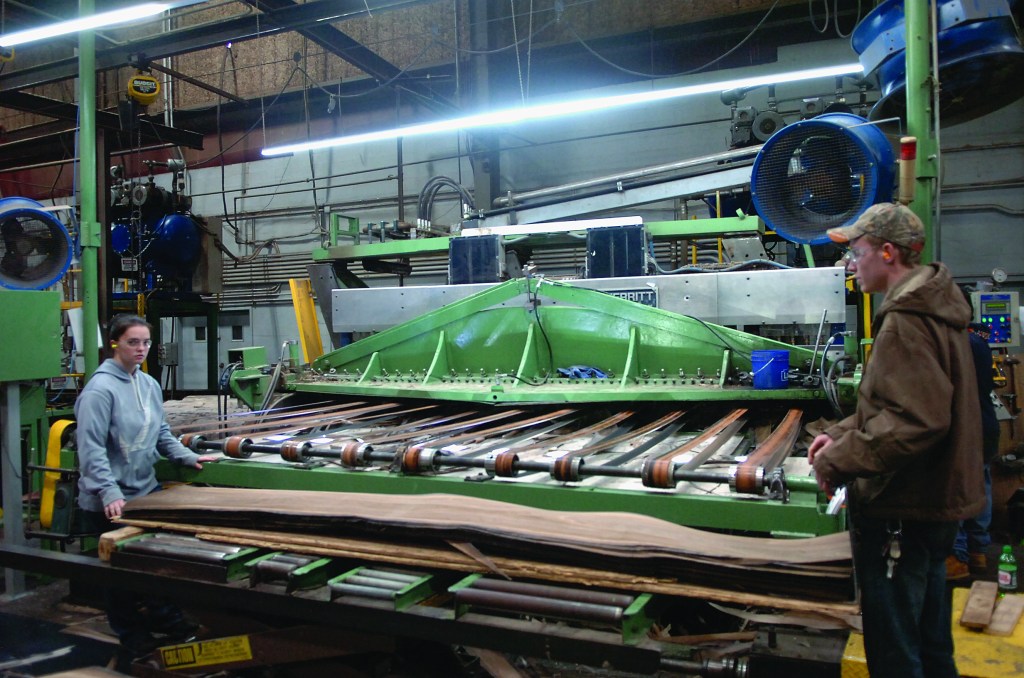 A vertical slicer creates thin sheets of veneer cut from a log held in place by a powerful vacuum. (Photo by Seth Littrell)

One of Clark County’s largest employers is quietly tucked away on Magnolia Street, unassumingly competing on an international level every day.

The Freeman Corporation, which has operated as a veneer mill for decades, is approaching 50 years in the business of making parts for doors, flooring and furniture used all over the world.

However, the history of the company goes back much further, to a man named George E. Tomlinson.

In 1914, Tomlinson founded what was then called the Tomlinson Company to create wood products, such as tobacco hogsheads and the collectible (and now valuable) Tomlinson Takedown Table, the first collapsable table that can still be found in locations across Winchester.

Following Tomlinson’s death in 1953, his grandson Gene Freeman took over the company. By 1968, the first veneer slicer was installed to expand the company’s services.

In 1982, Gene Freeman’s sons George and Reid Freeman — who now run the company — joined their father in the business and it expanded further, eventually ceasing it’s lumber production to focus entirely on veneer.

“We decided that as a company we needed to focus in on what we do best and do that really well,” Chief Financial Officer Scott Hisle said.

Today, under the continued leadership of George and Reid Freeman, the Freeman Corporation is the only operating veneer mill still in Kentucky, and it’s one of only 13 veneer slicing mills left in the U.S.

The corporation employs about 230 people and — with the exception of some satellite sales locations — all operations take place in Winchester.

The Freeman Corporation does business across the globe, and sales representatives travel as far as Europe and Asia to make contact with clients.

“Thirty percent of our product goes outside the U.S.,” George Freeman said.

Most of the time, George Freeman said, the company doesn’t know where their products end up, but rather what they will be used for, such as desks or doors.

However, the company will occasionally get special orders from noteworthy clients, including Google and Apple.

Hisle said a benefit of the Freeman Corporation switching solely to making veneer is that it greatly reduced the company’s impact on the environment.

Because veneer is sliced so thin, numerous sheets can be extracted from a single log, meaning the industry uses fewer trees than the lumber industry.

The company has been involved with the Forest Stewardship Council for several years, Hisle said.

The company also makes use of every part of the logs they purchase. Poor quality sheets of veneer are ground into mulch, and the remnants of logs after being sliced are sent to fuel the company’s large wood-burning boilers that keep the mill warm.

Hisle said most weeks of the year, the company is able to get by without purchasing extra wood for the boilers.

The mill also uses water collected in a pond from it’s roof in the veneer making process.

George Freeman said the process for making veneer has not changed much during the time The Freeman Corporation has been in the business, but technology has evolved to help in the process.

Much of the technology the Freeman Corporation uses was designed specifically for the company by Reid Freeman, George Freeman said.

The company has updated many old machines with new technology to make them more efficient. However, the nature of the business — dealing with delicate thin slices of wood — means there is always a need for human involvement in the process.

“There’s some stuff that just has to be done by hand,” George Freeman said.

A benefit of this business model is that it allows the company to hire people with multiple skill levels and specialties, Hisle said.

“We need some people with technical skills and management skills, but also if you are fresh out of high school and looking for a job, our door is open,” Hisle said.

George Freeman said the company is always making plans for the future.

He said 100 percent of the company’s profits are invested back into the company for future projects.

This year, he said the company is looking to upgrade and replace some old equipment to help increase their product capacity. The company is also looking into getting some technology that will allow it to fulfill more specialized orders.

George Freeman said being able to plan long-term is a benefit to being a family business.

“What’s nice about being family owned is that we’re not under as much pressure to perform for Wall Street,” George Freeman Said. “The goal is to make it to the next generation.”

AmbitionFest! to explore ‘What’s your tomorrow?’