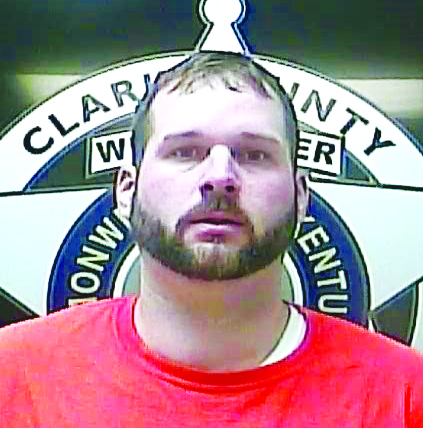 Daniel Vernon Banks, 33, of 135 College St. Apt. 1, was captured after he ran into a house on Old Boonesboro Road, where he hid in the kitchen cabinet, forcing seven children outside without shoes, according to court documents.

The chain of events started shortly before 5 p.m. Friday when officers received a report to watch for a stolen Ford Expedition near McClanahan Eye Care on Hospital Drive.

Corbett said Winchester Police Sgt. Joe Riley set up spike strips at the intersection of Bypass Road and Boone Avenue to try and slow the vehicle.

Instead, the vehicle turned directly toward Riley, who jumped out of the way. The damaged Expedition then turned onto Boonesboro Road and drove directly toward Capt. Howard Frick’s vehicle, which had stopped oncoming traffic.

The Expedition swerved away at the last second and turned onto Old Boonesboro Road before turning into the driveway at 5925 Old Boonesboro Road, Corbett wrote. The driver, later identified as Banks, reportedly jumped out of the vehicle while it was moving and ran into the house. Several children ran outside as officers pursued Banks. They eventually found him hiding in a kitchen cabinet inside the house. Banks was eventually arrested, though Corbett said he resisted officers’ efforts.

He is being held in the Clark County Detention Center on a $100,000 cash bond, according to court records.