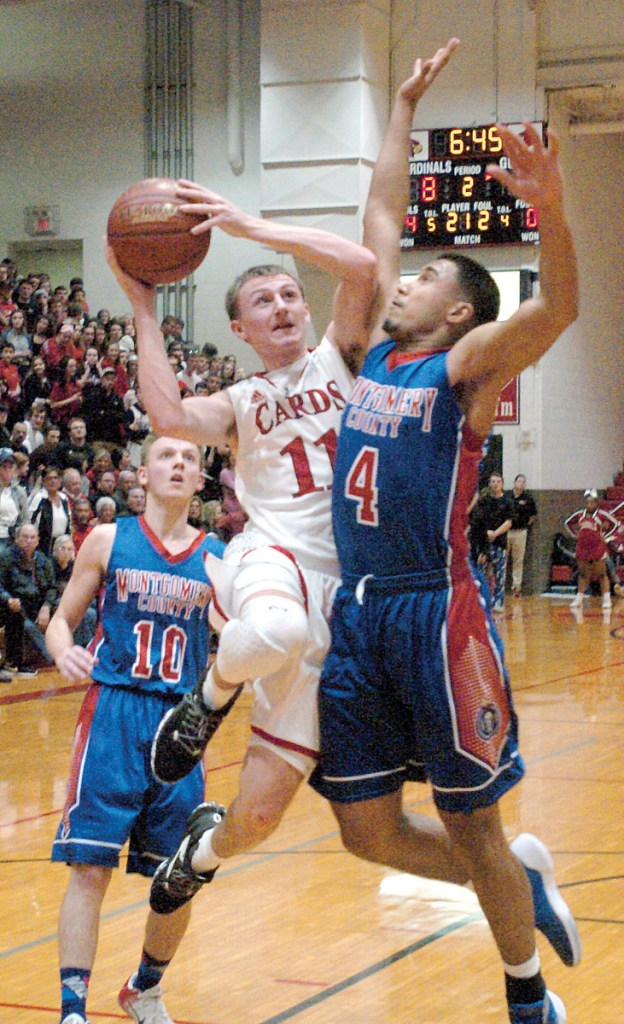 GRC’s Chase Taylor attacks the basket during the first half of a win over Montgomery County Friday night at Letcher Norton Gymnasium. (Photo by Casey Castle)

It had been a little while since the George Rogers Clark High School boys basketball team beat its rival Montgomery County — since Feb. 23, 2012 to be exact.

That was a stretch of 11 games where the Indians never saw defeat at the hands of the Cardinals.

That changed Friday night in Winchester when GRC came away with a 56-44 victory.

GRC got a big lift from Jordan Graham who scored the first eight points for the Cardinals and finished with 25.

Montgomery County (4-13) seemed unwilling to part ways with the streak, taking a 22-19 lead into the halftime break. But the Cardinals took control in the third quarter, with a 21-4 run lasting the whole period.

The Indians threatened to make in interesting late in the fourth quarter, but only cut the lead to nine with about two minutes left to play.

The shift in the third quarter came when the Indians switched to a zone defense, and  GRC coach Josh Cook credited his team’s willingness to be aggressive for the change in the second half.

“The kids responded well,” he said. “We executed well when they went to the zone.”

Cook said the Cardinals had also improved on the post entry passes, feeding the ball to Will Philpott, who finished with 15 points.

The Cardinals were back in action Saturday night, hosting the MLK Jr. Classic at Letcher Norton Gymnasium.

In the nightcap of the event, the Cardinals defeated Greenup, 63-56, on the back of Philpot’s monster game. The junior had a game-high 27 points to go along with 16 rebounds. He had a double-double before halftime with 16 points and 10 rebounds.

The Musketeers (12-5) nearly did to the Cardinals what they had done the previous night. Greenup had trailed 32-26 but took a 40-39 lead in the third quarter.

The Cards were able to bounce back and survived at home despite Gage Hughes’s 24 points and Michael Hubbert’s 16 for Greenup.

The pair of wins give the Cards a 12-7 record on the season. That’s the good news. The bad news is GRC plays just one home game in its next 10. The Cardinals won’t be back in Letcher Norton until Feb. 7 against Bath County. Before that, they’ll play seven straight away games, starting with a visit to another district oppnent at Bourbon County Tuesday.

“It’s a chance to grow together and get us used to different environments,” Cook said.