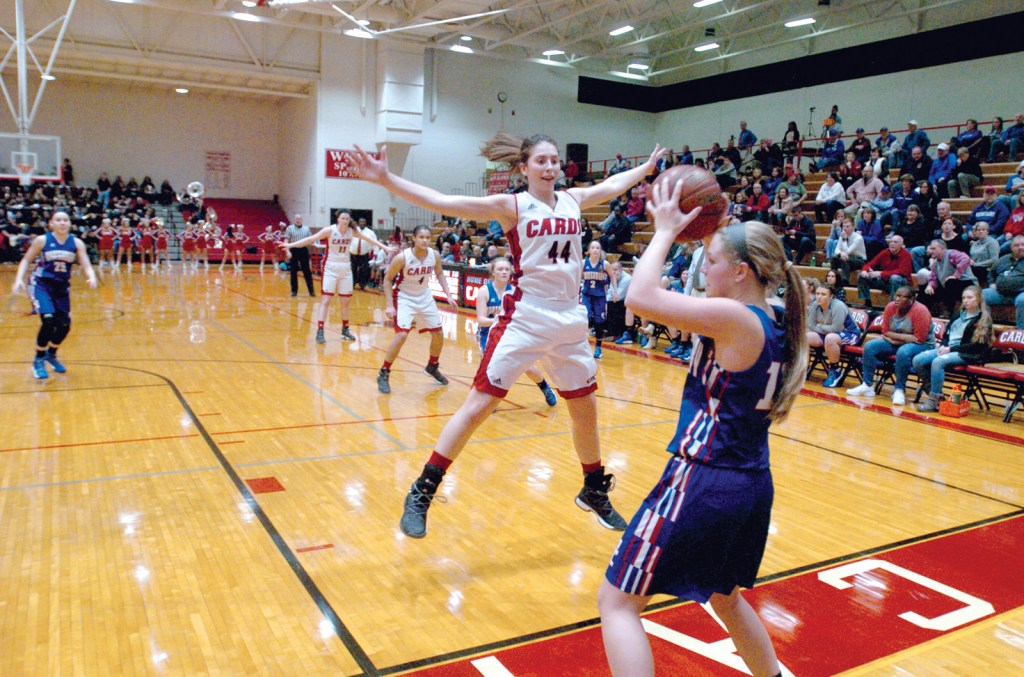 GRC’s Hayley Harrison guards the inbounds pass during the first half at Letcher Norton Gymnasium Friday. The Cardinals forced 23 turnovers and had 19 steals in the win. (Photo by Casey Castle)

The Cardinals cruised to a 77-28 win over Montgomery County, pestering the Indians wil a press that forced 23 turnovers and racked up 19 steals.

The Cardinals raced out to an 18-2 lead and were up 29-8 after the first quarter. The GRC defensive effort was impressive. Montgomery managed just one field goal in the first half, which came with 4:11 left in the second quarter.

Montgomery scored most of its 28 points on the free-throw line, giving GRC coach Robbie Graham about his only complaint about his team’s defensive effort.

“We’ve had a few days off and we went back to the fundamentals on defense,” he said. “I was pleased with our effort on defense.”

On offense, the Cards spread it all around, which has become the team’s M.O.

The win keeps the Cardinals perfect in district play.

The Cardinals didn’t get the same fast start the following night in the MLK Jr. Classic.

In fact, it was much the opposite. The Cardinals found themselves down 7-0 to Henry Clay to start the game and behind 14-7 after the first quarter.

But they recoverd with a 21-3 effort in the second quarter and held on for a 57-38 victory.

“I was disappointed in our start,” Graham said. “Felt like we came out flat. Sometimes when we miss an easy basket, that will deflate for us for a little bit. We were a little ugly early, but we picked it up.”

GRC altered its defense in the second quarter, opted for a half-court trap instead of a full-court press it had used in the first quarter.

“We were giving up some easy buckets with our press and we wanted to sit down and really guard them,” Graham said.

Again, the Cardinals spread around the scoring. Jasmine Flowers led the club with 10 points. Igo put in nine.

The wins give GRC a 15-2 record on the year. The Cardinals are also 3-0 in the district and look to get their fourth league win when they visit Paris Wednesday before returning home to take on Southwestern Friday.

Community-focused Beatty to be honored at MLK Jr. Classic