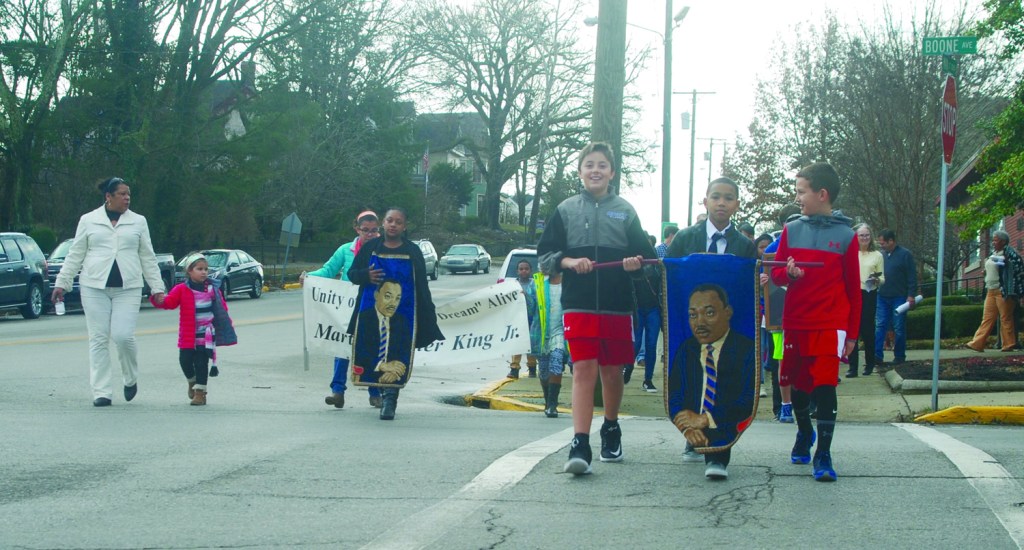 This year’s celebration at St. Joseph Catholic Church focused not on his activism, but on his service to others and the challenge before people today.

“Christian service equals love,” said Sheila Hill, a Winchester native and founder of Sassy Frassy, which provides scholarships for young at-risk girls. “Love requires action. It’s an action we express to others by loving and serving.

“Dr. King lived his life in service of others. It’s just ordinary people doing extraordinary things. Will you do things to show you care? Will you take time to help others by serving, of course by opening your wallet, but giving your time to volunteer?”

Hackett, the first African-American team captain in the Southeastern Conference, said he wasn’t going to play football at UK after being recruited from GRC by several universities.

“My dad was a big UK football fan. It was very unusual. We couldn’t go to the games. It was totally segregated. In 1950, my dad said, ‘One day I’ll go to one of those games.’”

Hackett joined the team in 1967 in the peak of the civil rights movement. Though UK’s team was integrated, they still ran into segregation frequently.

“When I wanted to eat at a restaurant downtown, … I had to stand or get it to go,” he said. There were places the team couldn’t stay or eat because of segregation, he said.

Athletics, though, provided an impetus for integration.

Two years later, Hackett became not only the first African-American captain at UK, but the first in SEC history.

“I had no idea the historic implications there would be,” he said.

“I have to make sure I meet the need of every kid in the program.”

Throughout the two-hour program Monday, there were performances by the GRC Singers and the GRC Jazz Band, and the Broadway Baptist Church Praise Dancers. There was a recognition for American Legion Tyler Banks Post 204 and its members, after the building was recently demolished, as well as the winners in the poster and essay contests from Clark County students.