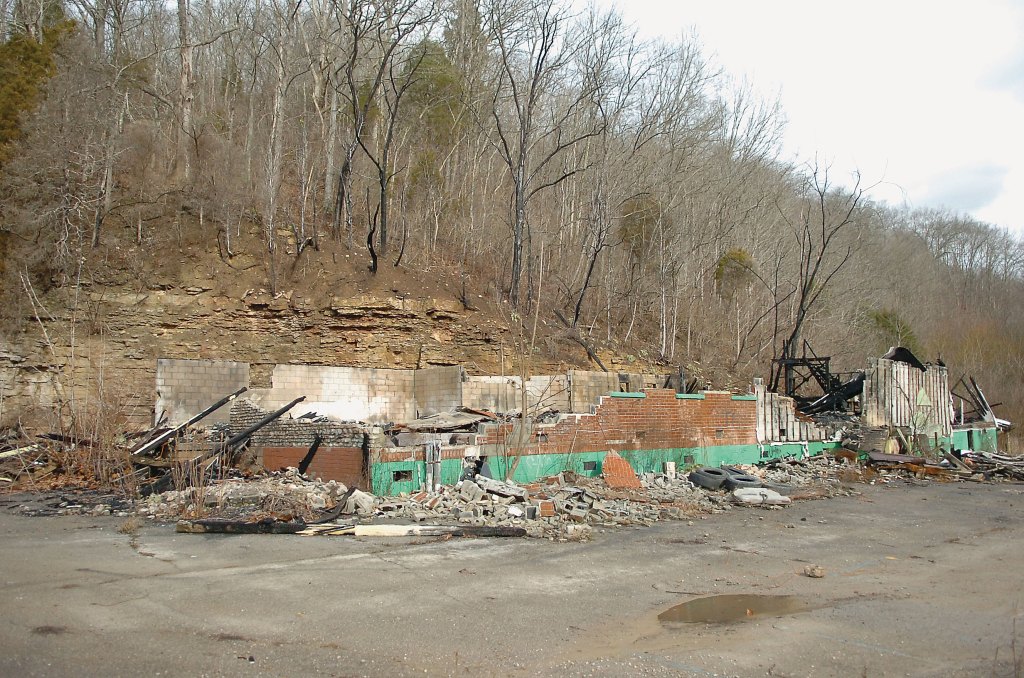 The foundation and partial walls of the former Bananas restaurant, which was destroyed by fire in 2015, remain on the property. (Photo by Seth Littrell)

More than a year after the former Bananas restaurant  burned to the ground, burned rubble remains at the property on Ford Road in southern Clark County.

On several occasions, the Clark County Fiscal Court discussed the situation and ways to possibly get the property cleaned up.

Last week, the county filed a complaint against property owner John Sword citing the county’s property maintenance code and asking for a declaration and injunction requiring the property to be cleaned up.

The long-closed, two-story restaurant caught fire on the night of Oct. 14, 2015, and was destroyed by the blaze. Today, the foundation and partial walls remain on the property.

Clark County Judge-Executive Henry Branham said the legal action was filed by County Attorney Brian Thomas as an administrative action. The Fiscal Court has not taken any official action, though that day may come.

“We’d like for it to simply be cleaned up,” Branham said. “Brian’s been trying to exhaust the administrative options.”

Branham said the Clark County Sheriff’s Office regularly responds to complaints in the area of people parking in the parking lot or participating in “nefarious activity.” The property has not been blocked off to curtail access, he said.

“To clean it up and secure the property somewhat, that’s what we’re asking for,” Branham said.

Though there was a business on the property for many years, the area is actually zoned for agricultural use, he said, which eliminates some avenues for enforcing the county’s ordinance, he said.

According to the complaint, Sword has not responded to letters from the county.

“The defendant should be required to clean up the property and make such maintenance and repairs including but not limited to the proper and lawful removal of the dilapidated structure, ensure all utilities are properly disconnected, cut and remove all excessive growth of vegetation (and) remove all debris in order to bring the property into compliance with the Property Maintenance Code of Clark County, Kentucky,” the complaint says.

“We’re hoping this will prompt a discussion with the owner,” Branham said. “Maybe we can come to a resolution.”