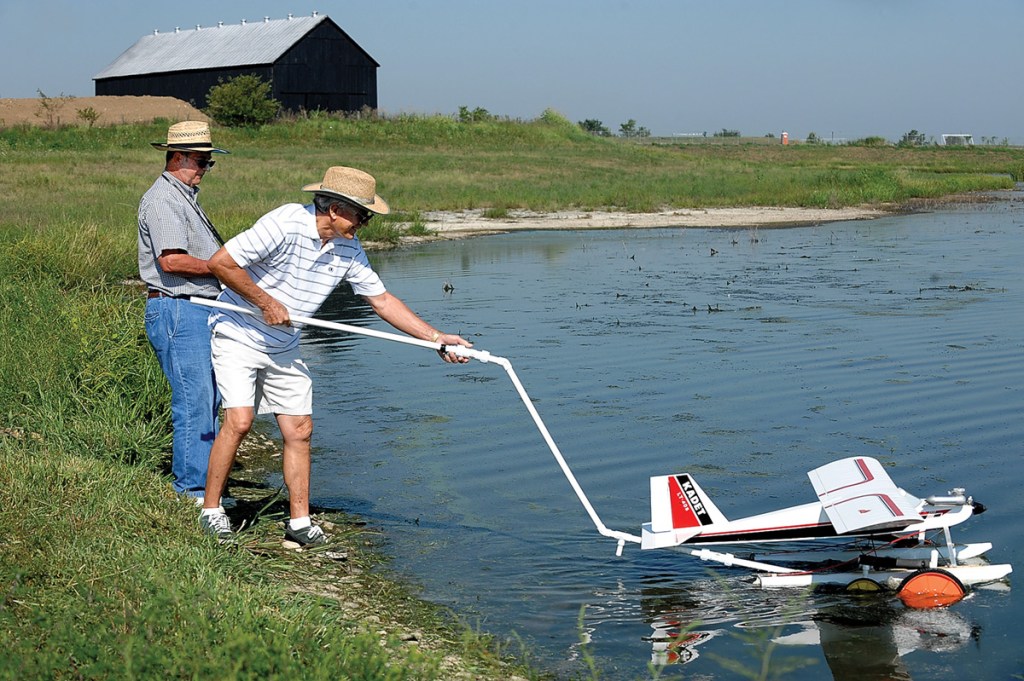 Members of the Central Kentucky Float Flyers fish one of their planes from the retention basin on WMU property.

The Winchester Municipal Utilities Commission voted Thursday to renew a contract allowing a unique club to take part in activities at the Strode Station Wastewater Treatment Plant off of Van Meter Road.

Since 2011, the Central Kentucky Float Flyers have utilized the North Effluent Retention Basin as a location to fly remote-controlled model airplanes and conduct charity events benefiting the community.

Club president Dan Thompson said the group is unique because it flies off the water, as opposed to land-based flying clubs. He said members of the group asked WMU for the use of the retention basin in 2010, but felt like they should do something to give back for the use of public land.

“For using the public facility we decided to get into charity,” Thompson said. “So we do a float fly on Memorial Day Weekend.”

Money raised from donations during the weekend flight  go toward the Winchester Youth Soccer League, the Clark County Animal Shelter and the Nursing Home Ombudsman Association, a group that provides advocates for people in 17 Kentucky counties who are in nursing homes but don’t have family.

Thompson said the group is a registered 501(c)(7) organization classified as a social club, meaning it can accept donations, but donations to the club are not tax deductible.

The group raises hundreds of dollars each year for charity.

While the WMU board approved a contract extending the club’s access for another five years, the decision must also be approved by the Winchester City Commission.

WMU General Manager Mike Flynn said he has forwarded the contract to the city for a vote at the commission’s next meeting.

Thompson said the club tries to fly at the retention basin four times a month, twice on weekends and twice during the week, contingent on the weather.

“If the wind speeds get above 10 miles per hour we don’t fly off of the water and we don’t fly if it’s raining,” Thompson said.

He said the club will likely be back out in earnest by the beginning of May, and anyone interested in joining the club can contact him at 859-221-8421.