Members of a local veterans organization say if more veterans don’t become active, they may have to disband.

The American Legion Post 25 was chartered in 2014 with about 30 members, however there are less than 10 active members today.

“We are at the point right now that if we don’t get more members, we will shut down,” Commander Dwayne Martin said.

The Legion operates on four “pillars of service and advocacy:” veterans affairs and rehabilitation, national security, Americanism and children/youth.

“The American Legion’s success depends entirely on active membership, participation and volunteerism,” the mission statement says. “The organization belongs to the people it serves and the communities in which it thrives.”

Prior to the charter of Post 25, there were at least two other well-established posts in Clark County. The American Legion Tyler Banks Post 204 was established around 1918 and operated from the post on West Washington Street until the early 2000s, according to estimates from Post 25 officers. The American Legion Daniel Boone Post 19 disbanded about 10 years ago.

Since chartering the current post, Martin said interest in the group has been limited.

“We have a really hard time getting younger people to join,” Martin said. “I don’t know if they know fully what the American Legion is, what we try to do for the community.”

Along with waning membership, the Legion also faces the challenge of not having a dedicated building.

“Right now, we don’t have a post,” Adjutant Jim Clendenning said. “The biggest thing about being a member of the American Legion is that you’re supporting a national group that works very hard to support veterans’ interests. But the thing about not having a building is we don’t have a place right now where we can go to find camaraderie with other veterans.”

That camaraderie is one of the Legion’s greatest benefits, service officer Mike See said.

“The thing about it is, old soldiers will talk about stuff together they won’t to their wife or their kids,” See said. “It used to be that veterans were treated as second-class citizens and some guys still feel that way.”

Martin, who described the organization as a brotherhood, said the Legion is open to any veteran who served during times of conflict — from World War I to the Gulf War and War on Terrorism.

“Two veterans a day are committing suicide,” he said. “Maybe if they were involved in something like the American Legion, that might not happen. Someone might catch it. It lets everyone know they’re not alone.”

The officers said the dilemma of membership and a meeting space are a bit of a “Catch 22.” Members pay dues, which fund rent and upkeep of a building. But, in order to promote membership, the officers believe a building is necessary.

“The Elks have been kind enough to let us use their meeting room for the past three years,” Martin said. “We don’t have the membership to get us a place. Even is someone came to us today and said we could rent a place for $200 a month, we couldn’t afford it.”

Martin said if someone was interested in donating a meeting space or building, the Legion members would take on responsibility for upkeep. But no such offer has come yet.

Funds are raised by membership dues of $40 a year and the Legion’s rose fundraisers.

In addition to the camaraderie, the American Legion is dedicated to community service and support of other veterans.

“Service to the community is our obligation,” Martin said.

“We will help fellow veterans any way we can. All they have to do is let us know.”

Martin said Legion members provide rides to veterans needing to get to doctor’s appointments, contribute to families of veterans who are sick or recently died. The organization donated time and money to the shelter for female veterans being established at the old Trapp School.

See said the Legion hopes to get an Honor Guard started to provided 21-Gun Salutes at veterans’ funerals.

The Legion sends clothing and magazines to veterans at the VA, donates to the Hope Center and helps veterans in the VA nursing home in Lexington.

“We do all that with about $2,000 in the bank,” finance office John Williams said. “Without the membership, we can only do so much. We are fundamentally a service organization, but we have to motive the current generation to get involved.”

The post will meet at 6:30 p.m. Thursday at the Elks Lodge on Shoppers Drive.

All eligible veterans are invited to attend meetings on the third Thursday of each month.

“If they would come to a few meeting and participate, they could see the American Legion is a good thing to have around,” Martin said. “We try to help where we can.” 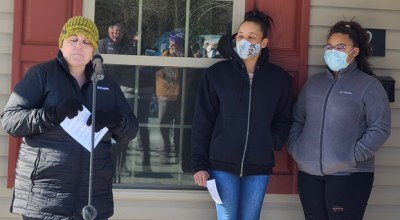