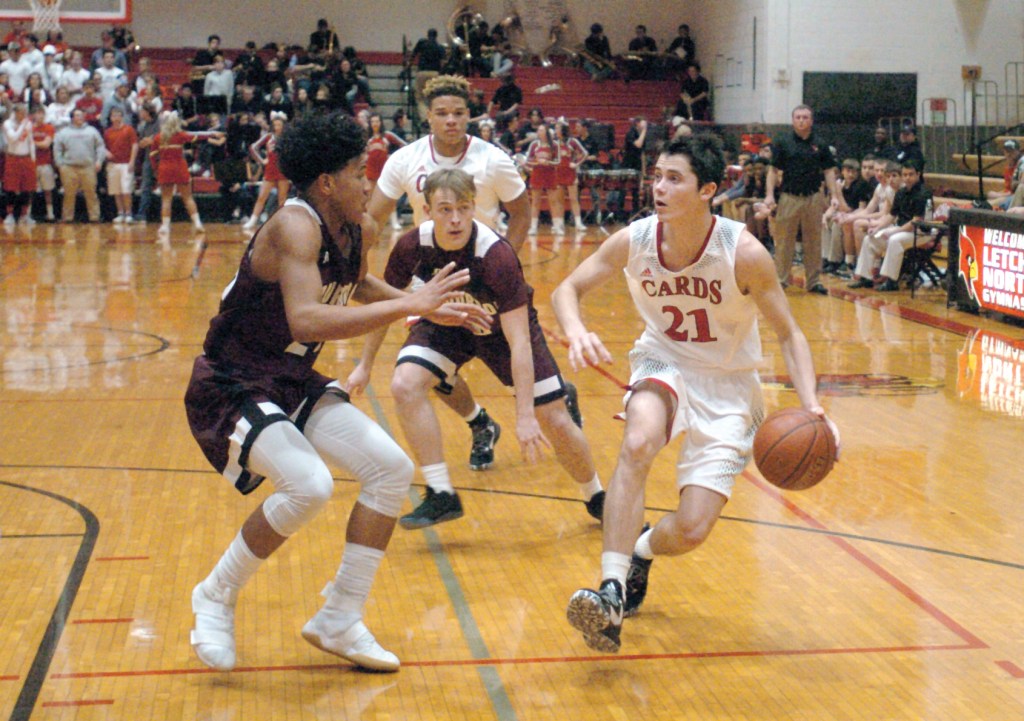 Photos by Casey Castle/casey.castle@winchestersun.com GRC’s Ryan Cooper, No. 21, drives into the Bourbon County defense Friday night in Winchester, above photo. Will Philpot, right, puts up a shot during the first half against Bourbon County, below photo.

For a team playing a large block of games away from the friendly confines of Letcher Norton Gymnasium, the George Rogers Clark High School boys basketball team is faring pretty well.

The Cardinals won for the third time in four games to start a seven-game road trip, thanks to a 64-52 win over Garrard County.

GRC (15-8) got a game-high 17 points from Ryan Cooper, who also grabbed five rebounds to take care of the Golden Lions.

Will Philpot just missed yet another double-double by grabbing nine rebounds. He put in 14 points and four assists in the win.

Garrard (3-17) was led by Justin Preston, who put in 13 points despite being held scoreless in the first quarter. Brandon Sebastion also had 13 points off the bench for the Lions.

It was the ninth straight loss for Garrard.

The Cardinals have three more road games, including a trip to Berea tonight to take on Madison Southern.

They are coming off a 75-68 win over Rockcastle County Tuesday night.

Then the Cardinals travel a bit closer to home when they head to Mount Sterling to take on rival Montgomery County.

The Cardinals ended a long streak of losing to the Indians earlier this season, but hope to start their own streak in the second game of a girl/boy doubleheader at MCHS Friday.

The final game of the road trip is a visit to Mason County (11-11) Feb. 3 before finally returning home to take on Bath County Feb. 7.