At the Museum: Exploring the Bean Family Collection 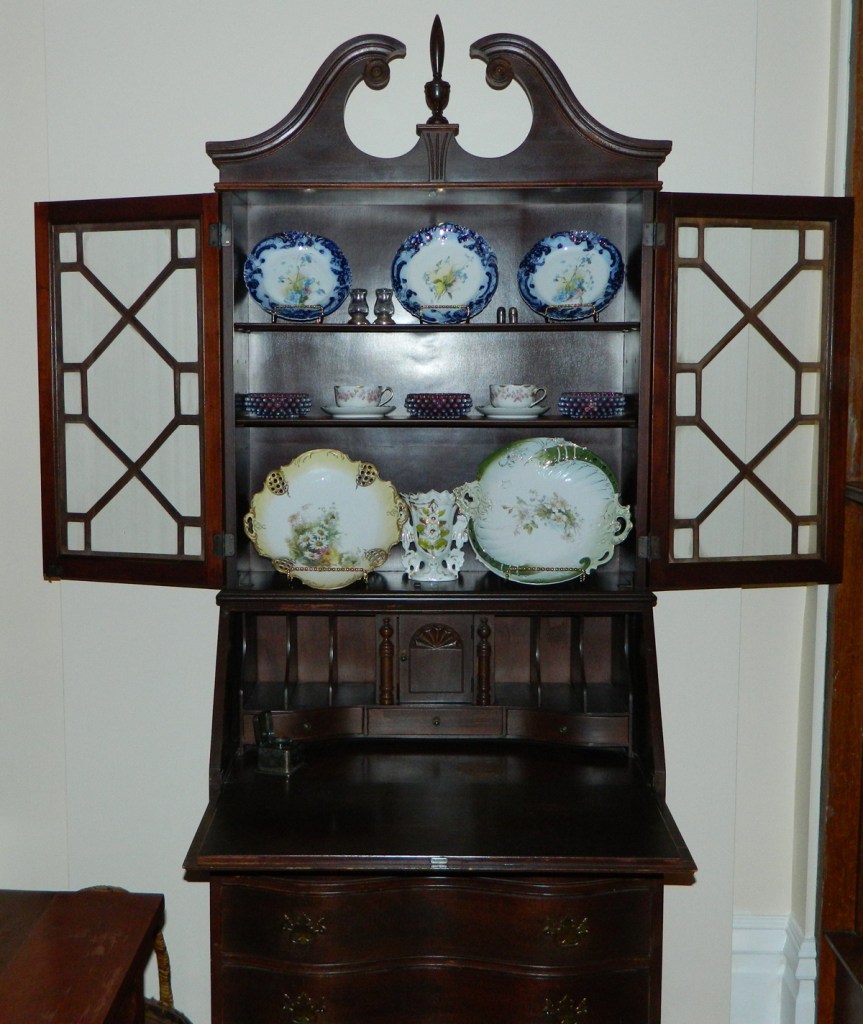 This secretary from the 1950s holds family china from the Beans dating to the 1800s. (Photo submitted)

Several years ago, the Bluegrass Heritage Museum was honored to receive a collection of furniture, dolls and quilts from the estate of Donald Henry and Martha Hukill Honican of Louisville.

Martha was a descendant of the Bean family, whose roots in Clark County go back to the late 1700s. It was Mrs. Honican’s wish that these heirlooms come back home to Winchester.

Before discussing the collection itself, let’s look at a bit of the family’s history in Clark County. There are still Bean family descendants in the county today, and their story here begins before Winchester was even an established town.

We are tracing Mrs. Honican’s lineage, but there are many branches to this family tree. If anyone is interested in a more detailed listing of early Bean genealogy, please visit the museum and ask to see our records.

John Bean (1766-1849) was a native of Virginia, born near Hagerstown. He was a soldier in the Revolutionary War and received a land grant for 100 acres in 1783 for serving three years in the Virginia State Navy. He married Eve Sensney near Winchester, Virginia, and in 1788 they settled on Strodes Creek at the forks of Pretty Run and Paris Pikes about five miles north of present-day Winchester.

Mr. and Mrs. Bean had eight children and the family lived in a house built by General Pendleton, the first brick structure in Clark County.

Their son Eli Bean was born in Clark County in 1794. He fought in the War of 1812 under the command of Captain Cunningham. Eli moved to Frederick County, Virginia, in 1818, married Sallie Hall. They moved back to Clark County in 1825 to settle on Pleasant Hill Farm on land obtained from his father.

Though primarily a farmer, Eli also served as magistrate for many years, and was sheriff of the county for one term.  He died in 1864.

Eli and Sallie had nine children. One son, Edwin P. Bean, was born in 1828 and died in 1903.  He was a farmer who lived for a time in Bourbon County but returned to Winchester and lived on Belmont Street. Edwin’s first wife was Sallie Owen, and together they had 10 children, including a girl named Mattie in 1864 (more about Mattie later).

Mattie’s sister Nancy (Nannie) married Franklin McIntire. Nannie and Franklin’s daughter, Katheryne, married Ellis Hukill. The Hukills’ daughter Martha married Donald Honican of Louisville; she was Mattie’s great-niece and inherited Mattie’s quilts and other family heirlooms. And it is through Martha the museum received these items.

It’s quite a remarkable collection providing a glimpse into a family’s life in the 19th and early 20th centuries. The furniture includes a butler’s chest and a schoolmaster’s desk and chair, all from the 1820s. A table and lamp date from the 1880s.

Skipping into the next century, a 1950s secretary contains family china and hobnail glassware from the mid-1800s. All of these items may be seen in the front and second galleries on the first floor of the museum. Items on the second floor include a chest and round table in the hallway, and a dry sink outside the restroom entrance.

A delicate little china tea set was a Christmas gift to 10-year-old Mattie Bean in 1874. Several dolls arrived at the museum lovingly packed with little slips of paper tucked in their skirts, revealing the names given to them by Mattie, her sisters and other relatives.

For example, identical-looking dolls named “Leona” and Pauline” were given to Jamie C. Bean in 1886 and Taylor Bean in 1888. “Isabelle” (1864) belonged to Sallie M. Dooley, one of Mattie’s cousins. A cradle and a child’s dresser from around this time show the usage of much love.

The Bean family quilts are displayed throughout the museum. Mattie signed and dated two of the quilts in the collection, but it is our understanding Martha Honican believed her great-aunt made all the quilts, or at least was involved in their creation.

All of them were hand-sewn and quilted, and their styles and fabrics reflect not only a high level of artistic skill, but also the times in which they were created.

These quilts will be discussed in greater detail in our next “At the Museum” column.