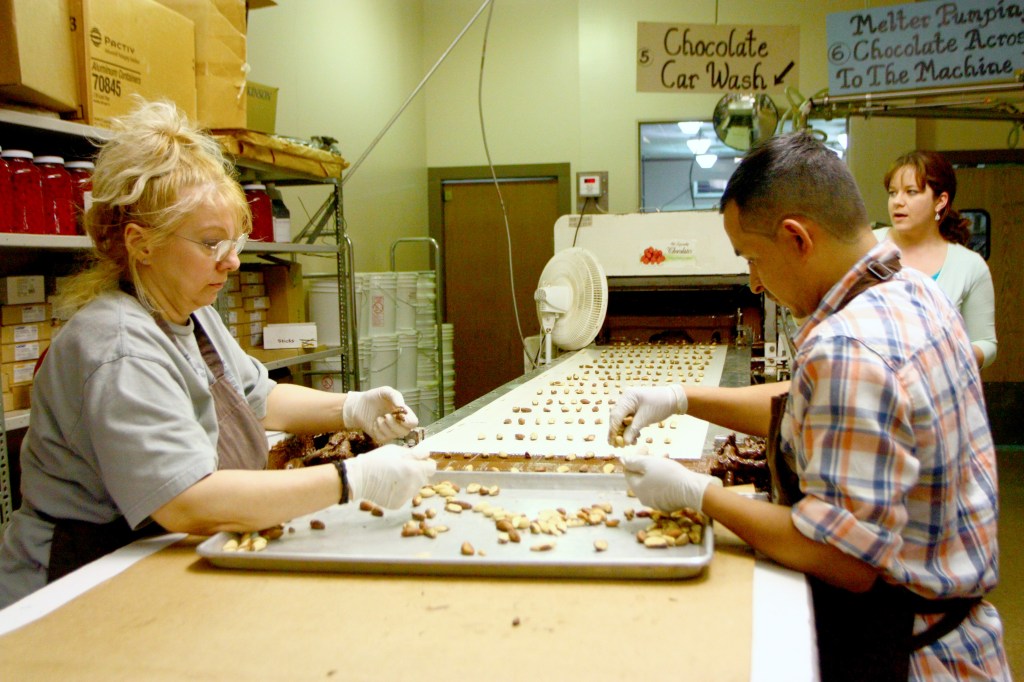 For any chocolate lover, touring the Old Kentucky Chocolates factory is like heaven.

The famous local chocolate provider has three locations in Lexington — in the Lansdowne Shoppes, at the Lexington Center downtown and on Southland Drive, where they have factory tours available.

Old Kentucky Chocolates was started in 1964 by owner Don Hurt. Hurt started out as a baker in the Kentucky Army Reserves, where he would bake for more than 4,600 people a day. After his military service, Hurt purchased Magee’s Bakery in Frankfort, where he began experimenting with candy making.

Eventually, the store changed its name to Old Kentucky Chocolates. In 1990, it moved to its current home on Southland Drive.

The company has sent products to soldiers serving in Iraq and has shipped orders as far as France.

The store’s busiest season is Christmas, but its single busiest day of the year is Valentine’s Day, Hurt said. On Valentine’s Day the store can product a flat of chocolate-covered strawberries every two-and-a-half minutes.

The tour begins at the back of the store and takes you through the kitchen and production areas of the factory.

While our tour was making its way through the kitchen, some of the company workers were making white chocolate covered popcorn — a Kentucky favorite no matter the season, our tour guide said. Company products such as fudge, brittle and pull cream candies are made by hand in the factory kitchen.

The tour took us into one of the production rooms where chocolate is put into molds to make different shapes. It was here we were instructed on how cocoa beans come from pods along the Ivory Coast and are harvested about twice a year. There are 30 to 50 cocoa beans in a pod and it takes about 400 beans to make one pound of chocolate.

Bourbon chocolates are one of the company’s most successful products. The cherries used for Old Kentucky Chocolates’ bourbon cherry balls are soaked in 100-proof Jim Beam bourbon for three to six months before dipping them in chocolate. Since the bourbon is not cooked out of the products, they are sure to “pack a punch,” our tour guide said.

After the tour, free samples of candies are being produced that day are offered. Chocolate-covered grapes were my favorite.

The factory tour shows off how the products are made with care by the hands of the people who work there. Knowing the products were made in Kentucky makes eating them just a little more special.