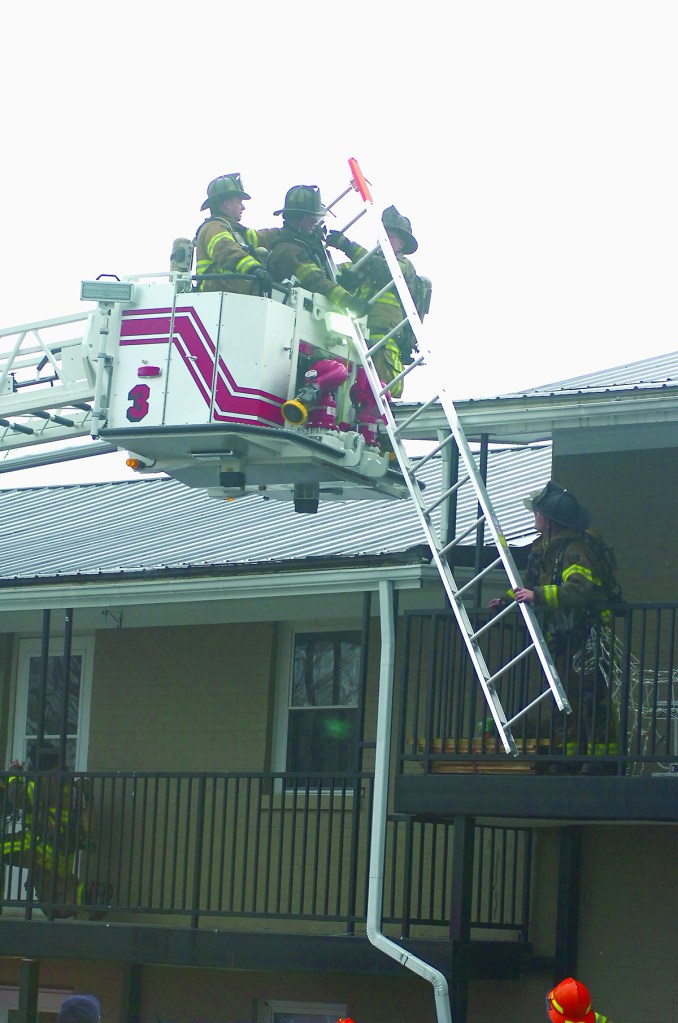 Winchester firefighters pull a ladder up to the roof of the complex to serve as footing while searching for signs of the fire spreading. (Photo by Seth Littrell)

Fire officials say there’s nothing to indicate foul play in Wednesday’s fire that damaged an apartment building on College Street in Winchester.

Winchester Fire-EMS Maj. Gary Henry said the fire appears to have started in a closet near a heating and air conditioning unit in a first-floor apartment, though the exact cause has not been determined.

The fire appears to have started near that closet and traveled in to the apartment above before filling the attic with smoke, he said. Two apartments were damaged by the fire and three others received damage while firefighters were battling the fire, he said.

Henry said no one was in apartment 3, where the fire began, but the resident of apartment 4, Devon Young, reported the fire.

Young told fire officials he was sleeping Wednesday afternoon when he woke to his smoke detector sounding, Henry said. After seeing the smoke, Young called 911 and began notifying his neighbors about the fire, Henry said.

The fire was reported at 2:26 p.m. Wednesday, and firefighters called for a second-alarm response as well as mutual aid from Clark County Fire Department. Firefighters were on the scene for about three hours Wednesday. No injuries were reported, Henry said.

The apartments are owned by Darren Henry, he said.

Nominations now open for Preservation Awards in May