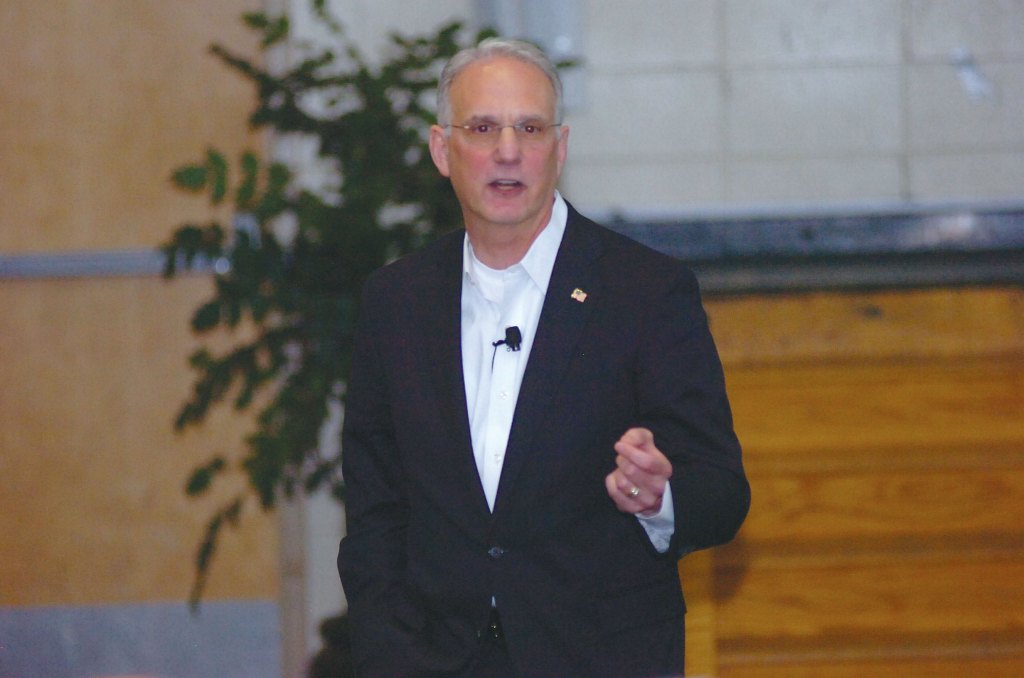 Rich Harwood, founder of The Harwood Institute for Public Innovation, provided a summary of a report the Institute conducted for The Greater Clark Foundation taking an honest look at perceptions of Winchester-Clark County at AMBITIONFest! Thursday night.

Anew report from The Greater Clark Foundation in partnership with The Harwood Institute for Public Innovation aims at taking an honest look at Winchester and Clark County, both the good and the bad.

Titled “Waving the Community’s Flag: Winchester and Clark County’s Moment,” the report looks at the perception of the community from the people who live there.

Harwood said he heard from many people during the course of his interviews that Winchester is a community of generous people. At the same time, there are people who feel they are not heard and there are divides holding the community back, he said.

He also heard many concerns about drug abuse across the community.

“We heard someone say that there are folks in the county who are so beaten down that they don’t trust nobody,” Harwood said. “And the question is, to move a community forward we need trust. It sits at the core of everything I’ve got to talk about tonight.”

Harwood said many of the issues in Winchester-Clark County stem from several divides within the community.

He addressed the lack of representation in the community for people of color in leadership and government positions.

Another divide was the “old vs new” or the clash between residents who have lived here for generations and those who are new to the community.

Divides are also apparent based on where people live, Harwood said. He said the north part of town was particularly singled out as being left to deteriorate, with some wishing to “wall it off” so the community would not have to deal with it.

Finally, churches in the community were seen as sometimes contributing to community divides rather than helping to heal them. While churches were praised by participants for taking care of people’s emergency needs, they were criticized for not tackling social justice issues, as well as for having a tendency to prioritize care of the congregation over care of the community.

YOUTH LEAVE NO ROOM FOR DOUBT

Perhaps the most telling perceptions came from the youth of the community, Harwood said.

He said the students told him they did not feel they were being adequately prepared for the future, and many of them wanted to leave town once they were able.

“When we asked these kids for their mottos for downtown I just want to tell you three of them: One was ‘get out,’ another was ‘run while you can’ and the third was ‘Deadchester.’ These kids believe that adults in this community have abandoned them and they want to leave.”

Young people complained about a lack of activity to engage the community and a lack of opportunity. Concerns were also directed at the school district, where some said they believe the school board spends too much time arguing over matters for political reasons and not enough time focussed on improving the quality of education for students.

DOWNTOWN: A SYMBOL OF INACTION

Nowhere did the negative perceptions of Winchester-Clark County hit harder than when residents were asked about downtown, Harwood said.

He said the lack of enforcement downtown has led many to suspect corruption as a reason some problems haven’t been addressed.

“Regardless of whether they want to spend time there or not, people said they see downtown as a symbol of the community’s inaction to come together and solve problems together,” Harwood said.

THE GLASS IS HALF FULL

While all these problems may seem daunting, Harwood said he found some very positive things happening in Winchester that don’t happen in other towns.

“You’ve got 10 or more churches working with Habitat for Humanity to build affordable housing,” he said. “You’ve got Partners in Education that are trying to provide mentors for kids in Paul (Christy’s) schools that are really important. You’ve got a downtown farmers market that is thriving, you’ve got Depot Street that is restored. You’ve got Leed’s Theater that is a gem. You’ve got the Sphar building that is going to be renovated. You’ve got all sorts of things that are happening.”

“When I look at this I say, ‘My god, there are lots of assets and good things happening here,’” Harwood said. “That can be built upon. The glass is not half empty, the glass is half full. The question is what do we do with the half-full glass?”

But while there are many groups doing good things, there are too many leaders doing things their own way instead of working with other groups in the community toward a common goal.

Harwood said there is a perception the community is run by an “good ol’ boy’s network,” leading to the perception of corruption.

He added that he believes Winchester is on the precipice of solving the troubles that afflict it. He said his goal is to provide a framework for organizations that can then be used by the community to find success.

Harwood also said the conversation about the state of Winchester-Clark County has become too negative.

While he said the community should not focus only on the good and ignore issues, groups need to take a realistic look at what problems the community is facing and talk to each other about common ground.

He cautioned against trying to tackle huge problems first, but instead encouraged leaders to team up on small, manageable projects and grow from there.

While the results of the report were difficult for some to hear, some also said they found it refreshing.

Clare Sipple, preserve manager at Lower Howard’s Creek, said she was very surprised Thursday’s meeting was “not a pep rally.”

“Harwood said we’re at a tipping point and we just need to work harder. We have a blueprint to move forward,” she said.

Molly Stotts, president of the Winchester-Clark County Farmers’ Market, said Friday about the meeting that she loves her town and is ready for the work that the future holds.

“Last night was amazing and I can’t wait to participate in the next step,” she said.

The Greater Clark Foundation is partnering with The Harwood Institute to offer a Public Innovators Lab in Winchester April 25-27. The two-and-a-half day lab is an intensive experience for up to 100 people to learn new ways to bring people together to solve local challenges.

Those interested in applying for the lab can visit clarkambition.org for more information and to complete an application.

The full report can be accessed here.