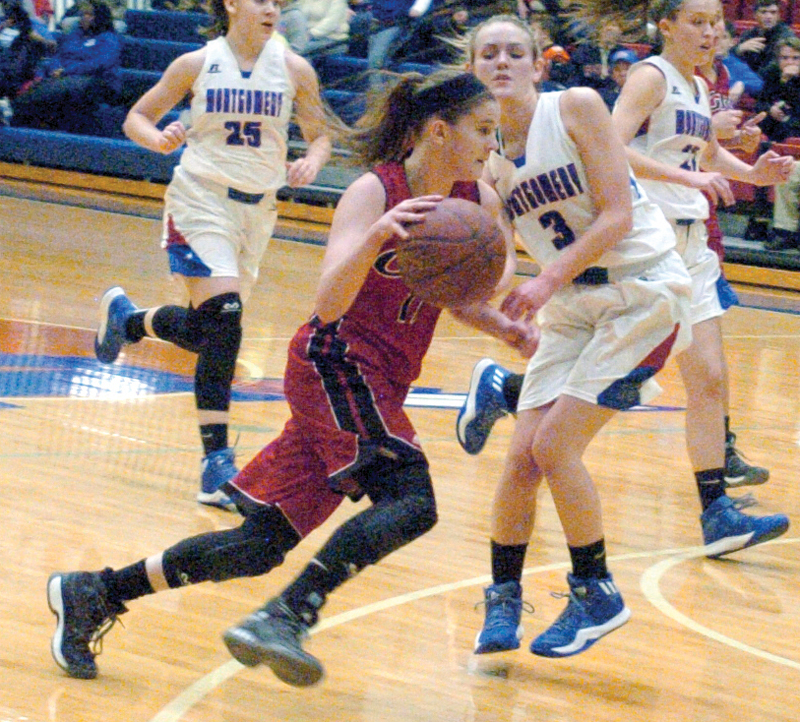 MOUNT STERLING — Kennedy Igo must have felt comfortable playing on her old home court, even if she was wearing a visiting team’s uniform.

The George Rogers Clark High School guard, who transferred from Montgomery County prior to the season, poured in a game-high 27 points to help the Cardinals cruise to a 76-32 win over the Indians Friday.

“Playing in front of my hometown crowd was exciting,” Igo said, adding it gave her a little extra energy.

GRC didn’t start with the shut-out defense it used to put the Indians away early two weeks ago in Winchester. But the Cards still led 27-12 after the first quarter and 56-20 at the halftime break.

Igo’s 27 was a game-high while Jasmine Flowers and Maleaha Bell each put in 12 points apiece.

Elizabeth Hardiman and Hayley Harrison each scored eight points in the win.

The Cardinals have locked up at least a tie at the top of the district standings. They will take on Bourbon County Monday looking for a perfect league record and the top seed in the district tournament.

“That top seed is important because it lets us play the No. 4 seed which will help us reach the region tournament,” Igo said. “And we have a tough region.”

The win helped the Cardinals bounce back after losing a tight contest to Mason County earlier in the week.

If GRC wants to get a rematch with the Royals and advance, the Cards will have to work together and communicate, Igo said.

“We need to make sure we’re on the same page,” she said. “We need to talk on defense and stop busting sets. We need to execute.”

GRC tips off against Bourbon County at Letcher Norton Gymnasium at 7:30 p.m. Monday.