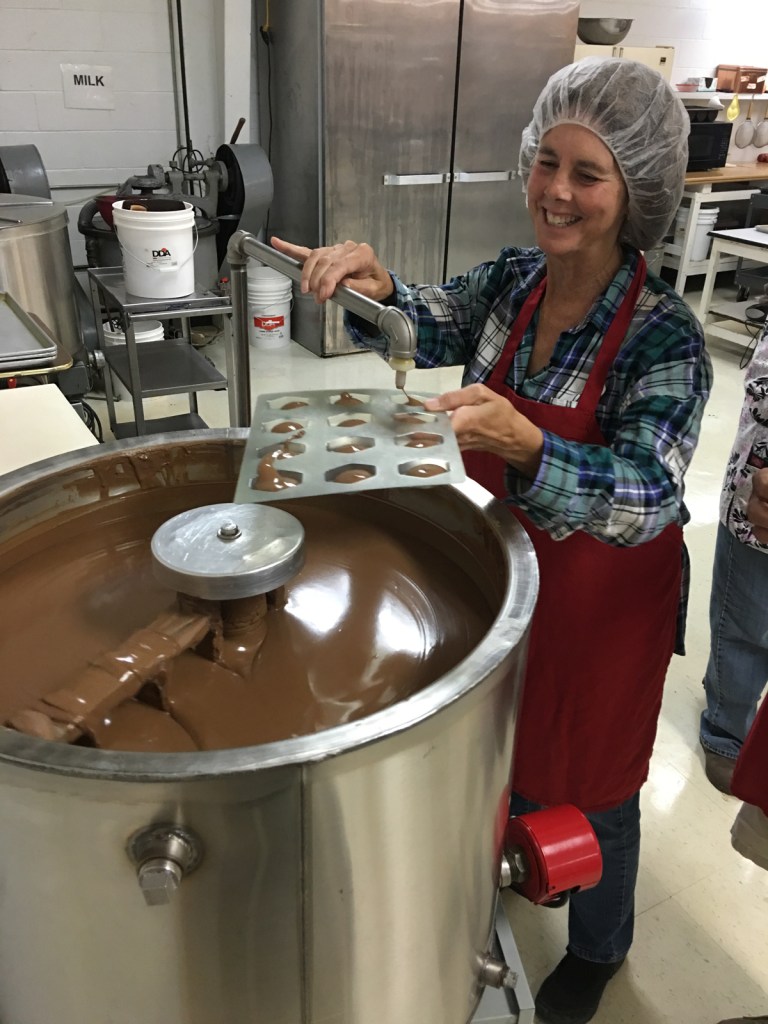 Laura Freeman, CEO of Laura’s Mercantile, examines chocolate from Ruth Hunt Candies in Mount Sterling that will be used to create her hemp candy. The hemp used in the candy is locally grown in Clark County on Freeman’s farm. (Photo submitted)

People traveling down the Hemp Highway of Kentucky looking for a unique treat to commemorate the adventure have a new option here in Winchester.

Freeman, the former owner of Laura’s Lean Beef, said that she  became interested in experimenting with hemp on her Clark County farm after the creation of the hemp pilot program through the 2014 Farm Bill.

“We put it in an organic field out here, which was 13 acres of very valuable ground,” she said. “I mean, you could get an expensive crop of organic corn off of it or something like that.”

However, she and her business partner Pasley, another Clark County resident who was working in state government at the time, faced several challenges in the beginning stages of their project.

For one, they did not receive their seeds until very late in the 2015 season after U.S. Customs and Border Protection refused to release the seeds to the state. Pasley said the first crop they planted was a complete gamble.

“We didn’t know pounds per acre or anything,” Pasley said. “We had no idea … Myself and my cousin Josh Rector came out here. We had a hay buster and we experimented with different rates per acre and the first year it was something crazy.”

The first harvest of the project — predictably —  followed suit.

“They came to me with two sacks of seed and said ‘here’s our harvest,’” Freeman said. “And I was like ‘Whoa, what am I going to do with this?’”

Freeman said after thinking about what she could use the seeds for in such low quantities, she finally settled on trying to make candy.

With the help of two interns, Freeman said they created their first batch of chocolates using hemp as an ingredient.

“I started selling these things and, you know, they weren’t too good, but people liked them,” Freeman said. “I did the winter farmers market, and my test market was the local history group at the library.”

Freeman also partnered with Ann Barker to make the candy until finally settling on Ruth Hunt.

The candy can be ordered from laurasmercantile.com or purchased in a variety of businesses around Winchester.

“We want to have our products in local retailers as much as possible,” Pasley said. “But if you’re not local and you’re interested in something that’s new, and healthy, and natural with no preservatives in it, we are accessible to the globe on our website.”

He said the website is being constantly updated as the company gets on its feet to explain what they are doing.

“I can’t tell you how many people around Winchester have asked me if this is going to make them fail a drug test,” Pasley said. “I did a controlled experiment on myself. I ate a daily portion of the chocolate for over a month and then I went to Dr. Burchett’s out on the bypass and had a medical drug test done on myself and I did not test positive for any drugs at all.”

Still, he said the stigma about hemp is a challenge for the company to overcome in its beginning stages.

“This is hemp, this is different,” Pasley said. “This is healthy for farmers. Everyone who’s involved with the hemp program in Clark County, we all are trying to create an entirely new commodity in hemp, but people continue to have negative connotations of it. That’s why it’s important to keep educating people.”