Nailed it or Failed it: Potato chicken strips a hit 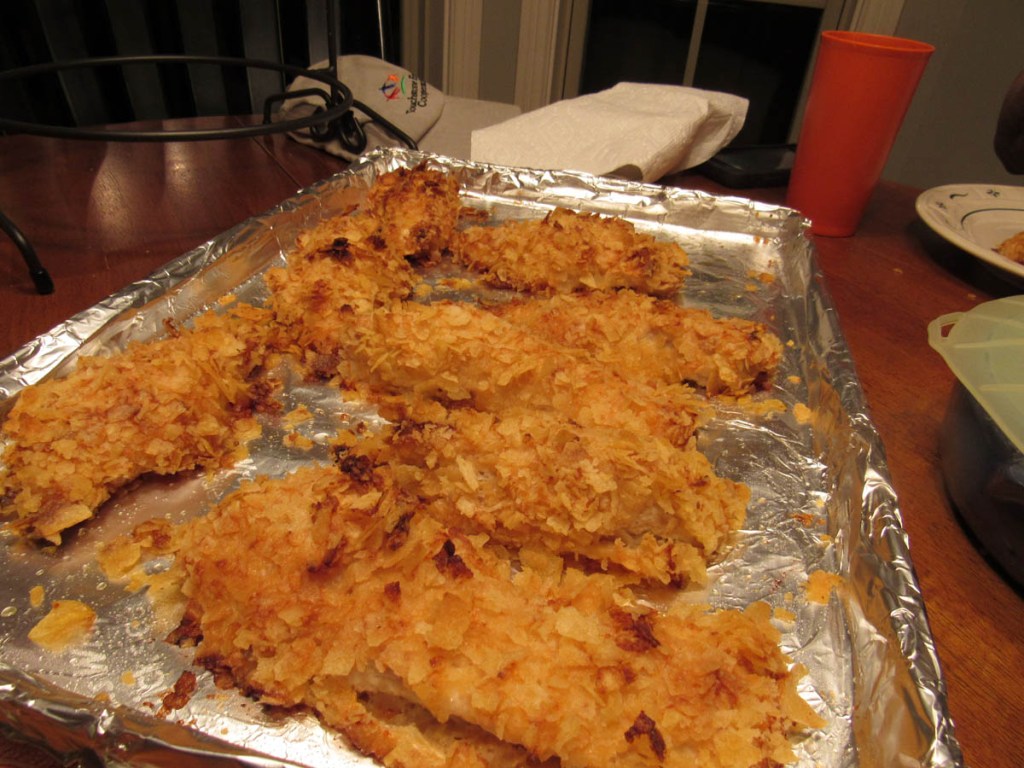 Chicken was on the menu for supper and when I found today’s recipe in my chicken folder, I figured it would be pretty quick to get it going. I found this recipe for potato chip chicken strips at tasteofhome.com.

When I got home from work, I turned the oven to preheat and got to work cleaning the chicken for this dish. I cleaned three large breasts and them cut them into big strips, then got started with the recipe.

The recipe calls for one-inch strips, but mine were quite a bit bigger.

I mixed the spices with the sour cream. I didn’t have onion salt but I figured there was probably enough salt in the potato chips it wouldn’t matter if I just used onion powder, and my garlic salt was an organic mixture I bought from My Father’s Garden back in the summer while at our local Farmer’s Market.

When I read that I needed to crush up a whole big bag of potato chips, I found that hard to believe. That sure seemed like a lot of potato chips. I started out just crushing up half the bag in a Ziploc baggie. Once crushed, I realized half a bag of chips really isn’t much. I poured them in a bowl and began the dipping process. Really, the chicken didn’t dip into the sour cream mixture. I basically had to slather it on with a spatula then put the slathered chicken piece in the potato chip crumbs and press them onto the chicken.

About half way through I needed to crush more potato chips and emptied the rest of the bag into the Ziploc for crushing. For your reference, if you make this recipe, just go ahead and crush the whole bag of chips, and use the bag they come in so you don’t waste a Ziploc or dirty something else in the kitchen.

When I’d used up all of the potato chips, I still had sour cream mixture and a couple small pieces of chicken left but the cookie sheet was full and I decided there was enough chicken there for me and Brad to have at least two meals.

I melted the butter and drizzled it over the chicken and hoped my husband didn’t think this was a waste of good potato chips — he really likes his Lay’s.

I got the chicken in the oven and started preparing our side dishes. When Brad got home, he wanted to know what smelled so good and I let him know what was in the oven.

Since my pieces of chicken were larger than the recipe called for, I let them cook for 30 minutes. The side dishes weren’t quite ready, so I left the chicken in the oven for about 10 more minutes. When I pulled the chicken out of the oven, the coating was a nice golden brown and I was anxious to give this recipe a try.

After our prayer, Brad and I each filled our plates. I have to say, we both liked this chicken, though we really couldn’t taste much of the seasonings I’d added to the sour cream. The crunch of the potato chips was perfect.

I nailed this recipe and it definitely was not a waste of good potato chips. Next time I’ll probably double the seasonings, and I think this recipe would make a great appetizer if you cut the chicken up into bite-size pieces.