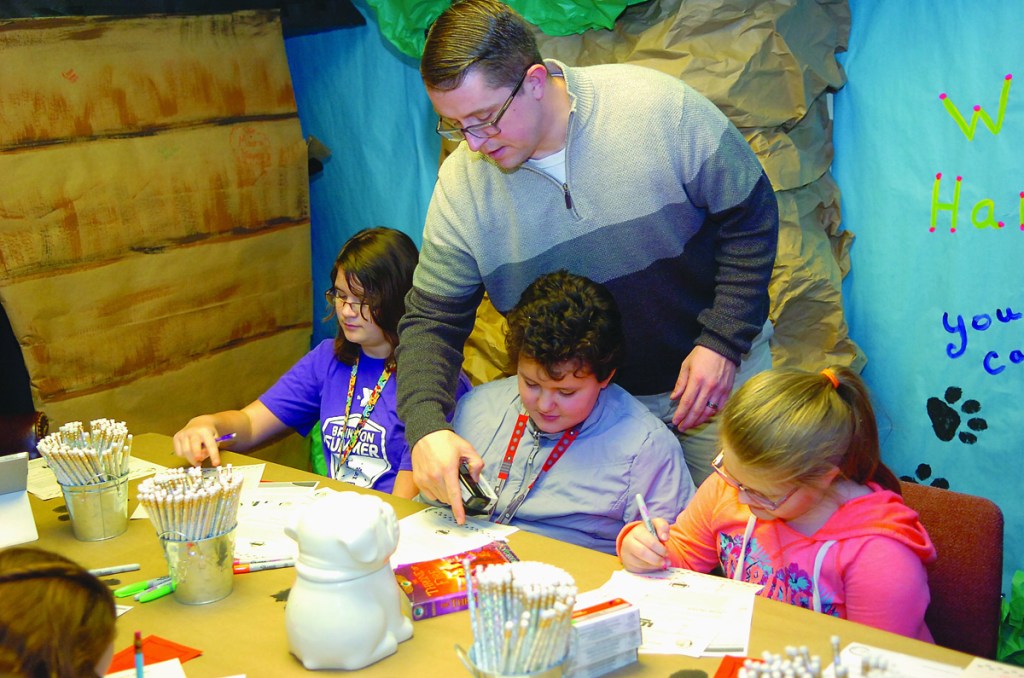 Principal Josh Mounts stamps a contract between Baker Intermediate and its students to work together for better academic success. (Photo by Seth Littrell)

When 10 students at Baker Intermediate were called into the conference room behind Principal Josh Mounts’ office Monday morning, they weren’t sure if they were in trouble or not.

However, the sound of Boston’s “More Than A Feeling” and colorful decorations covering the walls soon put them at ease.

The students had been invited to take part in the Distinguished Dog Park, a meeting Mounts created to talk with students about their academic standing and KPREP scores.

“It’s a chance for them to get some face time with the principal,” Mounts said.

After reassuring the students they were not in any trouble, Mounts had students examine their KPREP scores from the 2015 school year and compare them to data gathered during the current school year. The students identify where their strengths lie and where they need to work a little harder.

The group then brainstormed about strategies to be better students, including asking for help, taking notes and studying before tests.

Students also identified who inspires them to work hard and who they want to make proud, including teachers, family members and they themselves.

Mounts and the students then entered into a contract with each other.

“This is called the BARK contract,” Mounts said. “That stands for Bulldogs Accepting Responsibility for their Knowledge.”

Students agreed to show respect to their teachers and fellow students, develop healthy habits like getting enough sleep and eating breakfast every morning, have as close to perfect attendance as they can and work to score at least proficient in KPREP.

In return, Mounts promised the students that next year when KPREP scores are released, he will visit his former students at Robert D. Campbell Jr. High to celebrate with them.

“At the end of spring I’m coming to Campbell for last year’s sixth grade,” Mounts told the students. “We’re waiting for the weather to break and then we’ll have all sorts of inflatables and barbecue and all this other stuff. I want to do that with you guys too.”

Mounts said that between January and May he will meet with every student at Baker for the same discussion and promise. As the students left the dog park, they signed their names to the walls.

Infant killed in Sunday I-64 crash