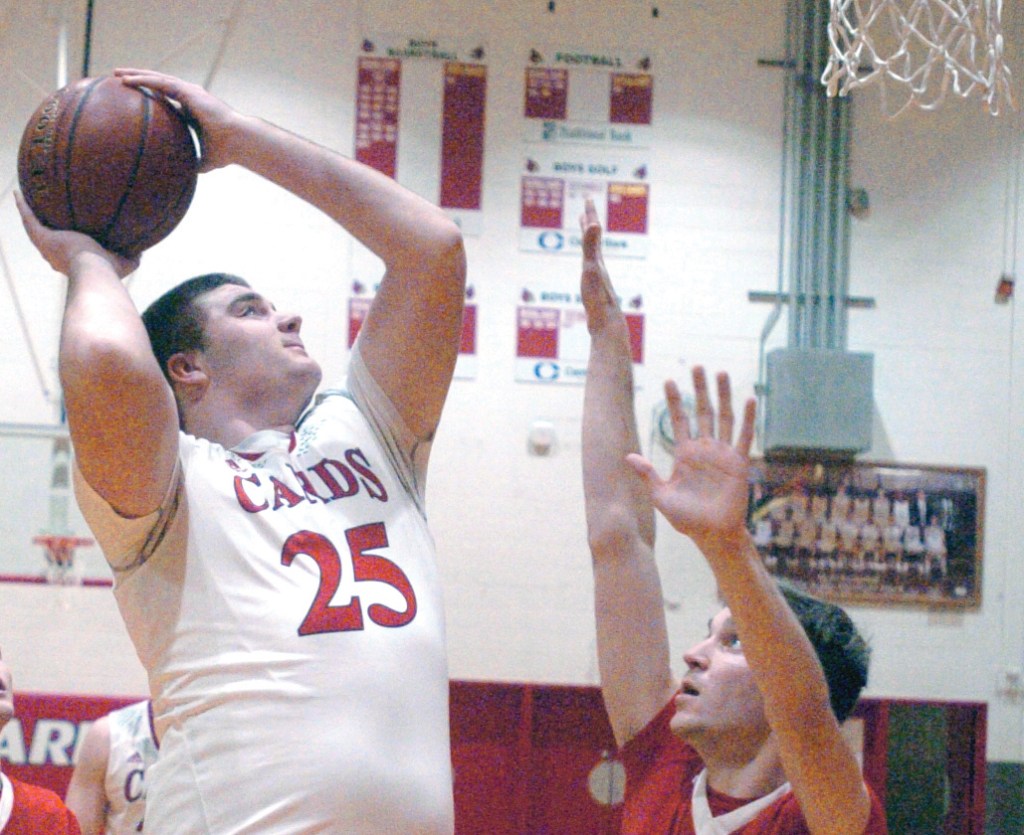 GRC’s Ben Jackson scores during the second half of a win over Bath County in Letcher Norton Gymnasium Tuesday. (Photo by Casey Castle)

Bath County High School boys basketball’s Ben Peyton banked in a 3-pointer as the buzzer sounded to signal the end of the first quarter.

It was about the only positive in the first period for the Wildcats, who had no answer for George Rogers Clark’s aggressive defense and red-hot shooting. The Cardinals led 29-10 after the first and never trailed in a 80-48 victory at home Tuesday.

GRC held a 12-2 lead in the first two and a half minutes. Ryan Cooper led the charge, scoring 13 of the Cardinals’ first 16 points. The shots were falling from deep all night for GRC, who finished with 13 3-pointers and started the game with four straight 3s. Cooper made a pair of layups off turnovers, the first two buckets inside the arc for GRC.

The pace slowed for the Cardinals in the second quarter, as Bath started with a 10-2 run, threatening to get back into the game before the halftime break.

“(Bath coach Bart Williams) can coach and he has some kids who can make some shots,” GRC coach Josh Cook said. “The first quarter was great. The second quarter was not as good. We’re a much better team when we don’t take plays off.”

Cook replaced most of his starters in the second quarter with reserves, unhappy with the effort he was getting out of his regulars.

“The great teams play 32 minutes. Good teams play 20 to 22,” he said. “We want to go from being a good team to a great team. I didn’t like our energy. You have an opportunity to play, and if you’re out there you should give your best.”

Ben Jackson gave the Cards nine points off the bench. Jehdon Jenkins had seven points and six rebounds. Will Philpot put in six and pulled down 11 rebounds. Jordan Graham had five points and collected five assists.

The GRC bench erupted in cheers in the final seconds after freshman KJ Rucker hit a 3-pointer for his first varsity points.

“He’s fearless,” Cook said. “He doesn’t back down. He’s had a great freshman and junior varsity season. If you haven’t heard of KJ Rucker yet, you’re going to.”

The Cardinals are back on the road Thursday in a key district match-up. The Cards travel to Paris to face the district-leading Greyhounds, who are enjoying a 20-7 season. They are 11-1 in the 10th Region and undefeated in district play. A win for the Cardinals would tie them with Paris for first place.

The Greyhounds lost Saturday to Corbin, 92-74, for their first defeat in 11 games. Paris hadn’t lost since 2016 and the 11-game winning streak started with a 58-55 win over GRC in Winchester back on Jan. 3. During that span, Paris won its first All ‘A’ State Championship.

“They’re really good,” Cook said. “I’m hoping we’ve got better, too. Corbin shot the ball really well. They shot the ball like we did in the first quarter tonight, but for the whole game. We’ve got our work cut out for us.”