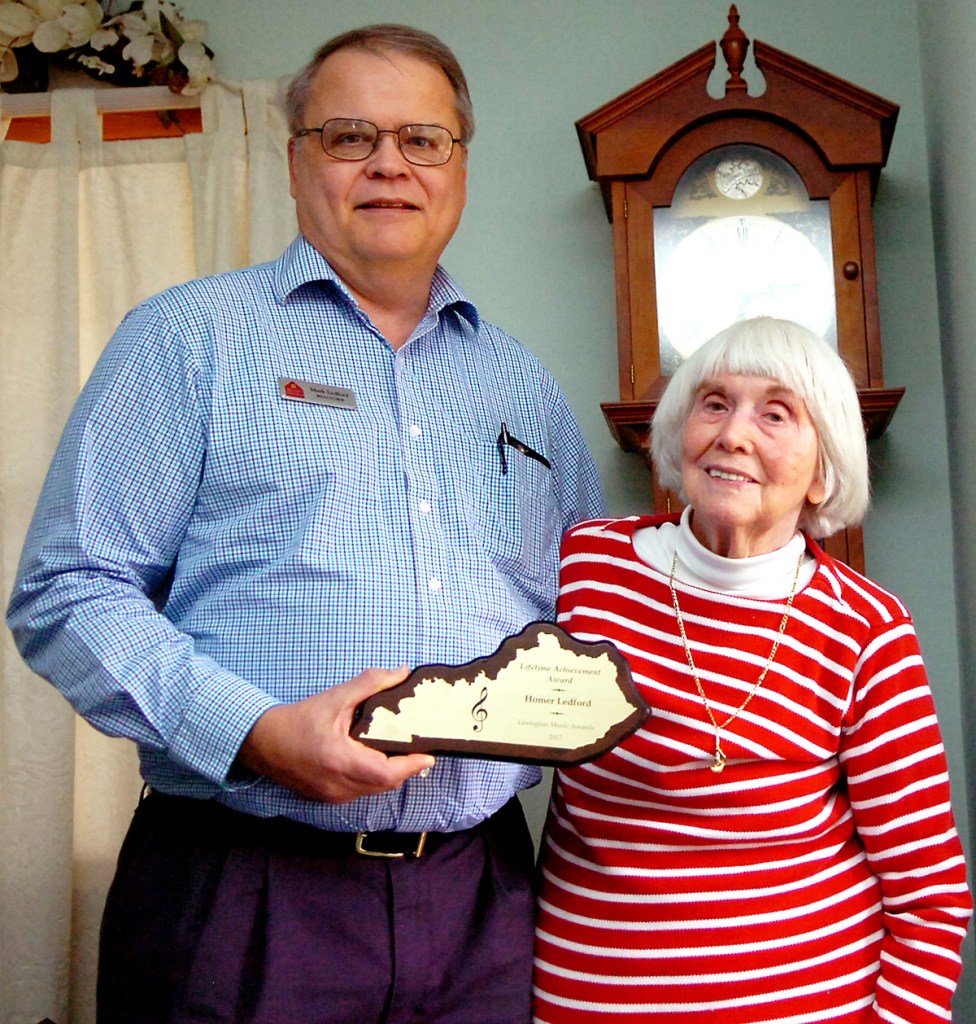 Bluegrass music legend and instrument maker Homer Ledford has posthumously been given the Lifetime Achievement Award from the Lexington Music Association.

Ledford, who grew up in rural Tennessee before moving to Winchester, his home of 50 years until his death, was nominated for the award by longtime friend Michael Johnathan, who is best known as the host of the Woodsongs Old-Time Radio Hour.

Colista Ledford, Homer Ledford’s wife, said she and her late husband met Johnathan when he came to have his instruments repaired by Homer Ledford, and the two struck up a close friendship.

“I think it was more of a father-son relationship, really,” Colista Ledford said. “He just got really fond of Homer.”

She said the two played music together often, and the song “Colista’s Jam,” which once opened the Old Time Radio Hour, was written by Homer with Johnathan’s help.

The award is not the first to be bestowed upon Homer Ledford, who has been recognized several times and even has a star in his name outside the Kentucky Theatre in Lexington.

Additionally, some of Homer Ledford’s instruments, including his “dulcitar” a combination of a dulcimer and a guitar he invented, are displayed by the Smithsonian Institute as a representation of his work.

Homer Ledford’s son Mark Ledford said that the craftsmanship his father was known for when making musical instruments came about when he was fighting boredom as a teenager with rheumatic fever.

“He picked up a knife and learned to carve just to have something to do,” Mark Ledford said.

Colista Ledford said her husband had always been a creative person, partially out of necessity as he had grown up in poverty.

“He didn’t have toys as a child, he had to make his own,” she said.

Mark Ledford accepted the award on behalf of his father at a ceremony in January. He and his mother described it as a great honor, and evidence of how beloved Homer Ledford was by his friends, family and community.

“Everyone loved Homer,” Colista said. “They literally loved him.”

Those interested in learning more about Homer Ledford can visit an exhibit about him at the Bluegrass Heritage Museum. A historical marker at College Park also gives a brief overview of his life and contributions to bluegrass music.