Winchester Players to present  ‘The Ice Wolf’ this weekend 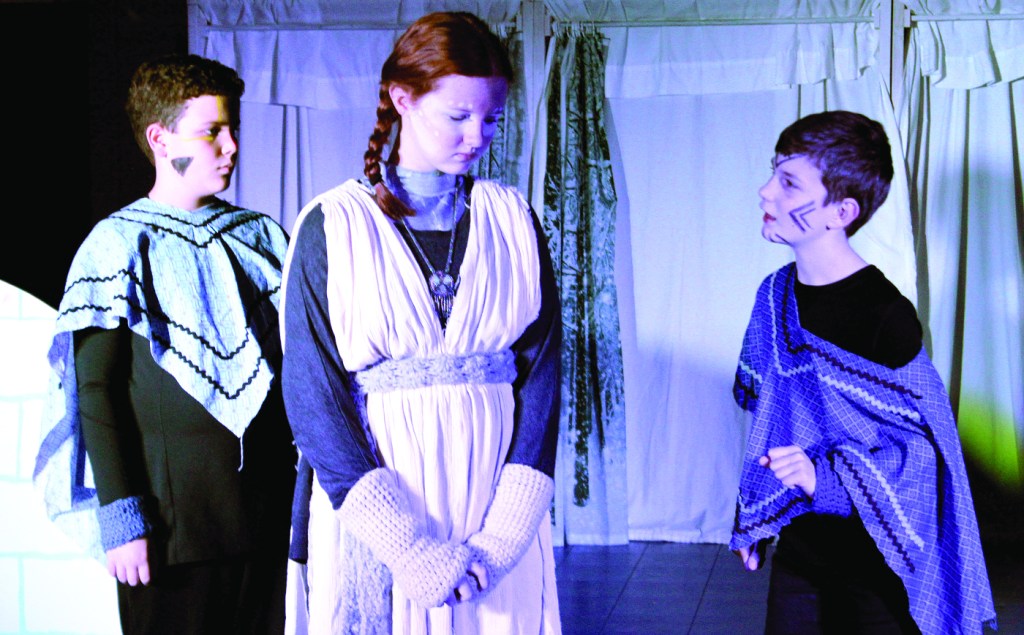 Anatou, portrayed by Hannah Christopher, center, is bullied by villager Motomaik, portrayed by Zach Ross, right, as her best friend Tarto, portrayed by Dylan Diguette, looks on in the Winchester Players' production of "The Ice Wolf." (Photo by Whitney Leggett)

A cast of more than a dozen local children and teens will bring to life a Eskimo folklore this weekend.

Winchester Players will perform, “The Ice Wolf,” a tale of revenge, redemption and learning to accept yourself and others despite their differences, Saturday and Sunday.

Winchester Players director Kelly Estes said the cast of actors from ages 8-19 will tell the story of Anatou.

“Anatou is born into an Inuit village,” Estes said. “She has red hair and pale skin, which is something the other villagers have never seen.”

The villagers believe Anatou brings bad luck and blames all their problems on her, Estes said.

Anatou’s parents love her and accept her, but when they disappear on a hunting trip she is banished from the village.

“She runs into the forest and find the Wood God and begs to be changed into a wolf,” Estes said.

When she is finally transformed, Anatou seeks revenge on the villagers who treated her like an outcast. At some point, she and the villagers must learn how to live together and come to terms with their differences, Estes said.

Estes said she chose the production, which was written for children by Joanna Kraus, because of the lessons about self-acceptance and the effects of bullying.

“The play is all about learning that it is OK to love who you are,” she said. ‘You don’t have to change yourself to fit in. There’s a really strong anti-bullying message.”

That message has resonated with the young cast.

Fourteen-year-old Hannah Christopher plays Anatou, and she likes that her character displays a variety of emotions throughout the show.

“She’s a really strong character,” Christopher said during a dress rehearsal Tuesday night. “She has to learn to love herself.”

Lainie Mitchell, 13, is the show’s choreographer and portrays a Wind Spirit. She said the play can teach teens her age how to handle bullying.

“I think the good thing about this story is that it can show someone who is bullied that you don’t have to change yourself to please the people bullying you,” Mitchell said.

Dylan Diguette, 12, plays Tarto, Anatou’s best friend and defends her from the bullies in the village.

“She learns that being different is OK,” he said. “The moral of the story is to stand up to bullying.

The play is the sixth production for Winchester Players, which Estes founded in 2005.

“The Ice Wolf” will be presented at 7:30 p.m. Saturday and 2:30 p.m. Sunday at Strode Station Elementary School. Tickets are $10 for adults and $6 for children 12 and younger, and can be purchased at the door.

WPD officers may get body cameras