Nailed it: Pecan-crusted chicken a win 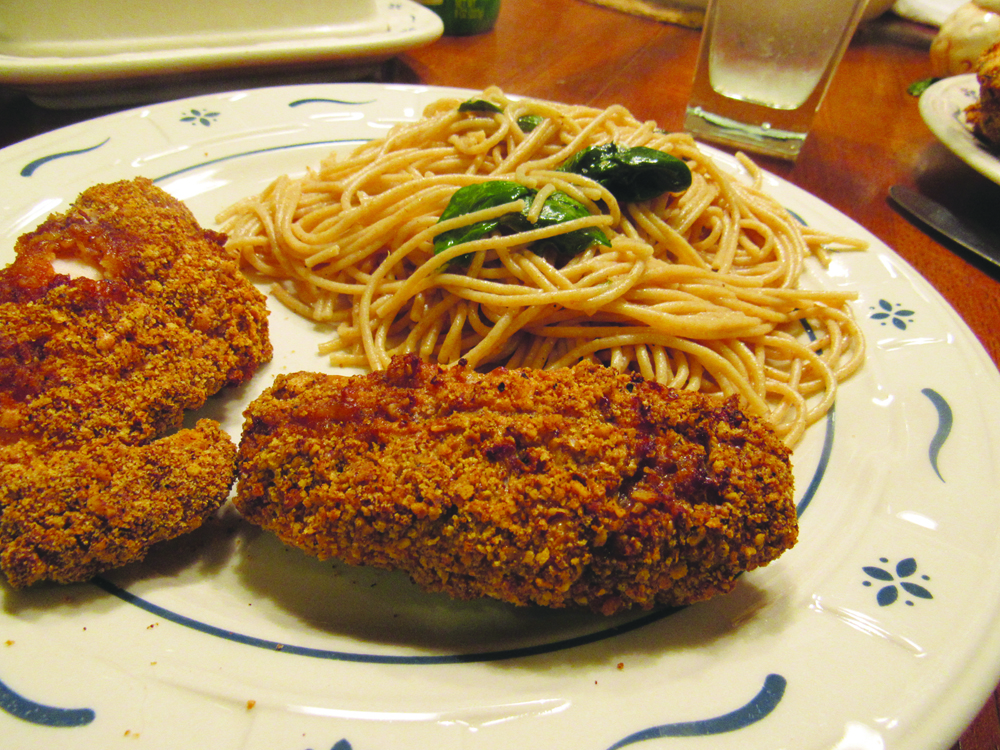 In searching through my folder of chicken recipes I ran across today’s recipe for pecan-crusted chicken tenders which I’d torn out of the March 2008 issue of Southern Living magazine.

As you know I like chicken and the picture that accompanied this recipe really looked good. Until I started putting the ingredients together, I didn’t realize this recipe was listed in the magazine as a “Healthy Living Light Fare” recipe. Since all of us could probably use something on the light side, I figured this recipe would probably be a good addition to my self-made cookbook.

I’ve got several recipes similar to this one and reading the ingredient list, the differences were obvious to me. First, I’d be using an egg white and not a whole egg or butter to dip the chicken in. Second, the recipe calls for saltines instead of bread crumbs. Third, I’d be using cooking spray instead of oil or again, butter.

When I got home from work, of course the chicken had not thawed while in the refrigerator, so I placed it in some cold water to get that done. While the chicken was getting a quick thaw, I got the rest of the ingredients together. I don’t keep saltines crackers in the pantry but I do keep wheat Ritz on hand. Since they seem to be smaller than a saltine, I used a couple more than the recipe called for. I used my food chopper to chop the pecans into a ground consistency, which took no time at all.

I placed the crackers, pecans, paprika, salt and pepper in a baggie so clean-up would be easy and I’d have one less thing to wash. I decided one egg white probably would not be enough to coat all of the chicken so for good measure, I used two — which ended up still not being enough. From experience, I knew I’d need more than 1/4 cup flour. I didn’t measure, I just scooped some into a bowl.

I lined my pan with parchment paper, put the wire rack on top and gave it a light spray of Pam.

I checked the chicken and it was thawed enough to begin the process of getting it coated with flour, egg white, then the cracker mixture. This process is always messy and the coating got all over my hands. I know I could use a fork or something else, but I just think it’s easier to use my hands, even if I have to wash them half way through the process.

I guess I had more than 1-1/2 pounds of chicken because I did not have quite enough cracker mixture to coat all of my chicken and two egg whites weren’t enough either. Instead of making more cracker coating, I got out another baked chicken coating mixture I keep in the freezer and used that to finish up the two chicken tenders I had left.

Instead of breaking open another egg for an egg white, I just used the two yolks that were sitting on the counter from separating them earlier. I know that ruined the “lite” part for those two pieces of chicken, but oh well.

After getting all of the chicken on the wire rack ,I read the recipe one more time and was glad I did because I hadn’t lightly sprayed the chicken with cooking spray.

My chicken tenders were large so I set the timer for 15 minutes and got to work fixing a side dish for our meal.

When the timer sounded, I flipped the chicken and returned it to the oven. Since the tenders were large, I decided to cook them another 15 minutes. When I checked them, they weren’t done enough for my liking and I added another five minutes or so to the baking time. When they came out of the oven, they looked and smelled good.

As Brad and I sat down to eat, he said a prayer thanking God for all of our blessings and the meal. After a few bites, we both said we liked this recipe, and the chicken was very tender.

I nailed this recipe. However, it’s not one I’m going to keep because I’ve got similar recipes that we like better. I don’t think the light part of the recipe played a part in my decision.

I also made a new pasta dish to go with this meal and I’ll share that recipe with you next week.

Preheat oven to 425 degrees. Stir together crushed crackers and next four ingredients.

Dredge chicken tenders in flour; dip in egg white, and dredge in saltine misture. Lightly coat chicken on each side with cooking spray; arrange chicken on wire rack.

Bake at 425 degrees for 18 to 20 minutes or until golden brown, turning once after 12 minutes.