GRC girls rally from 24 down to top Lafayette 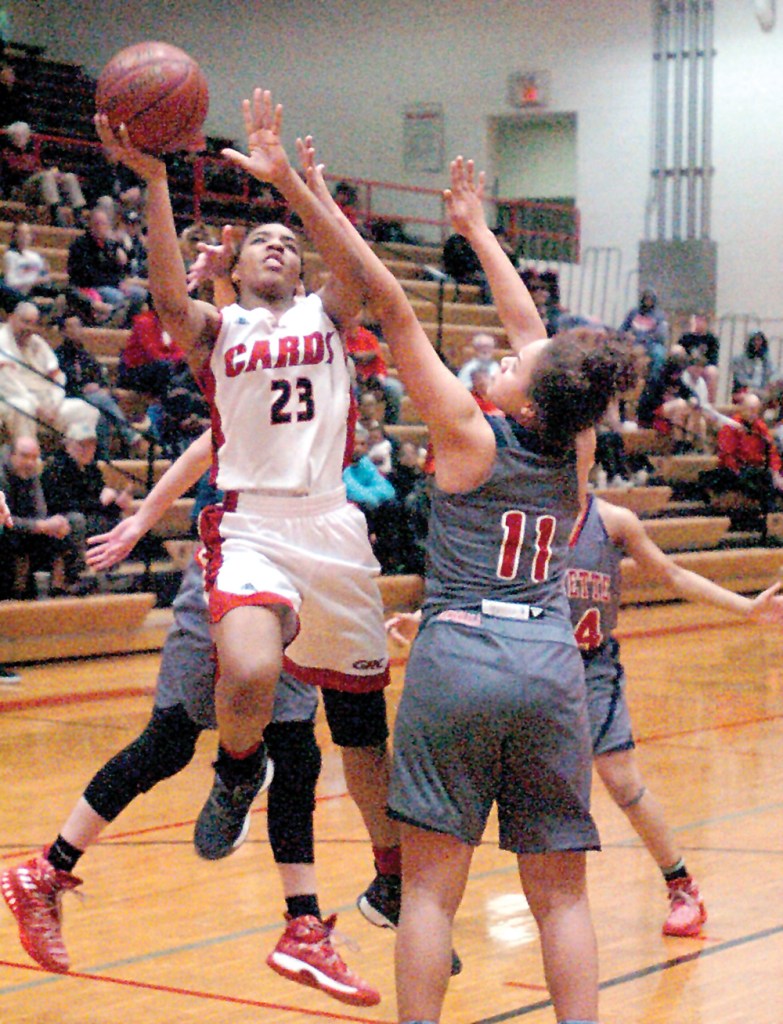 GRC’s Sha’Maya Behanan shoots during the first half against Lafayette Monday in Winchester. (Photos by Casey Castle)

When Sha’Maya Behanan grabbed Kennedy Igo’s pass in the paint and put up a shot in traffic with eight seconds left to play, it was the first lead the George Rogers Clark High School girls basketball team had enjoyed all night.

The Cardinals only had to make sure it stood up for eight seconds, and they did to pull out a 64-62 win over Lafayette in the final regular-season home game Monday night.

“All the credit goes to the girls,” GRC coach Robbie Graham said. “They didn’t give up. We had our shot and we pulled it out.”

After the first quarter, it didn’t look like the Cardinals had any hope of making a game out of it.

The Generals were up 27-11 after the first period, but the wheels didn’t come off for GRC until about midway through the quarter. The game was tied at 8 before Lafayette went on a 17-0 run, buoyed by hot shooting and Cardinal turnovers.

“It seemed like everything that could go wrong did wrong in the first quarter,” Graham said. “We were missing easy shots. They were making tough shots. We were turning the ball over.”

But the Cardinals just wanted to cut into the lead and make it manageable, putting the pressure on the Generals to hold on to their lead.

“There was no panic, no quit,” Graham said.

Lafayette’s zone gave the Cardinals fits, though, and solving it proved to be a problem through the first half.

Graham wanted his ballhandlers to attack the basket when they got into trouble, forcing the Generals to move their zone. That opened it up, but the Cards still struggled to make some easy baskets.

“We had a lot of great looks, but missed some chippies,” Graham said.

The Cards cut the lead to 10 at halftime. They still trailed by nine going into the fourth quarter.

But GRC didn’t give up on the defensive end, scoring 30 points on turnovers for the game and holding a tiring Lafayette team to just five points in the fourth quarter.

Maleaha Bell and Behanan led the Cardinals, both earning double-doubles. Behanan scored 20 points to lead all scorers and Bell finished with 17. Both players had 10 rebounds.

“This was a total team effort,” Graham said. “I told them in the locker room, ‘I have a great feeling about this team.’ There was a championship type atmosphere here late in the game, and we could have quit. I can’t say how excited I am about this win.”

The Cardinals improve to 23-4 and prepare for their regular-season finale, a visit to Bryan Station (11-15) Thursday. The Generals fall to 20-8, the loss snapping a five-game winning streak.

The game saw the return of Jasmine Flowers, who had missed a few games because of an illness. She gave the Cardinals six points in 24 minutes off the bench.

“That’s a little more than we really wanted to use her,” Graham said. “She got a little tired, but we’re excited to to get her back. She deepens our rotations.”