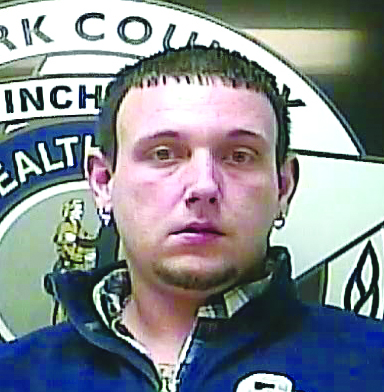 A Clark County man was arrested Wednesday for allegedly breaking his wife’s leg more than a year ago in southeastern Kenutcky.

Gregory Smith, 29, of 111 Buckner St., was located in a vehicle Wednesday after the Clark County Sheriff’s Office received information from Bourbon County about Smith’s whereabouts. Deputies spotted Smith in a car on Lexington Avenue shortly before 5 p.m.

The driver, Tiffany Ritchie of Cynthiana, was charged with hindering prosecution or apprehension, after reportedly being warned about helping Smith.

According to court documents, Smith was wanted in Pulaski County for charges of second-degree assault, terroristic threatening and non-payment of fines.

According to the warrant, Smith’s wife told authorities she tried to leave her home on Nov. 7, 2015, when he grabbed her, threw her on the ground and twisted her knee. When she asked what he was doing, Smith reportedly replied, “I’m going to break your leg so you can’t leave.” Moments later, she said she heard a snap and felt the pain. She said she tried to get up twice, but fell. After lying in the floor for four hours, she said Smith put her on the bed and took her cell phone, car keys and clothes in case she tried to leave.

The following day, she said he took her to the hospital but threatened to killer and take her son if she said he was the one who hurt her. She said she didn’t, and was discharged with a leg brace and crutches. When they got home, she said Smith took the crutches and her clothes, leaving her on the bed.

Eight days later, she said she was able to hobble and hop on her good leg, when Smith sat on the bed and twisted her leg again, reinjuring the broken bone.

She said she escaped a couple hours later when Smith fell asleep. She went to a women’s shelter, where staff took her to the hospital, which confirmed her leg was broken again.

According to the Clark County Detention Center website, Smith is being held on a $30,000 cash bond.