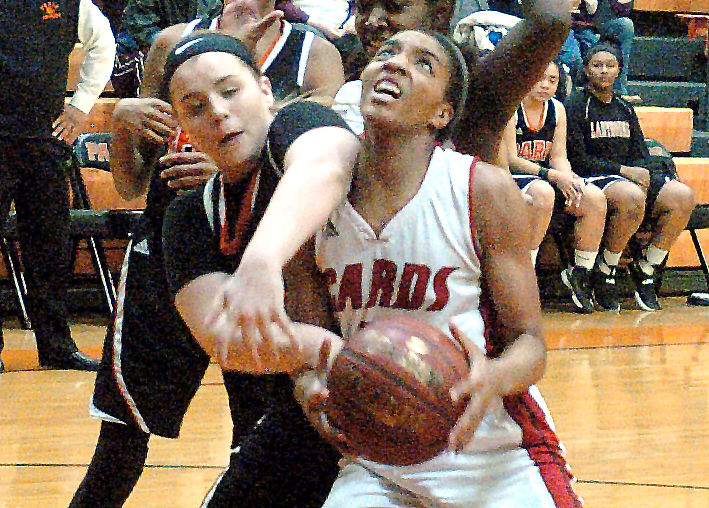 PARIS — It took a little while for the George Rogers Clark High School girls basketball team to get going Monday night in the opening game of the 40th District Tournament.

But eventually, the Cardinals found their stroke and settled down to put Paris away, 73-33, and advance to the championship game.

“We played them twice before and won by a large margin so we were a little lethargic, and we might have been a little nervous, a little jittery,” GRC coach Robbie Graham said. “Settled down at halftime, looked a lot more sharp. We were making the extra pass to find each other and made more shots, which allowed us to set up our press.”

The Cardinals jumped out to a 16-7 lead in the first quarter, but the Greyhounds closed to within three before a late push gave GRC a 29-19 lead at halftime.

Paris scored just six points in the third quarter and the Cardinals expanded the lead to 53-25 going into the fourth quarter.

Kylee Murray had eight points, including a pair of 3-pointers. Sha’Maya Behanan and Jasmine Flowers each put in six points.

Flowers saw a little more action in her second game back after missing a handful of games late in the season.

Chez Tye led the Greyhounds with 13 points. Paris finishes the season with a 12-18 mark.

The 25-4 Cardinals will take on Bourbon County, which defeated Montgomery in the evening’s second game.

The Colonels had no trouble advancing past the Indians Monday night, 64-34.

Montgomery led just once at 3-0, but trailed 16-3 at the end of the first quarter.

Bourbon’s 37-9 rebounding advantage in the first half helped the Colonels build an insurmountable lead.

Delaney Bromagen did the heavy lifting for the Indians with 15 points.

The season ends for Montgomery at 5-26.

The Colonels improve to 16-15 and face GRC in the championship game, which is set for 7 p.m. Thursday at Paris High School.

GRC girls rally from 24 down to top Lafayette