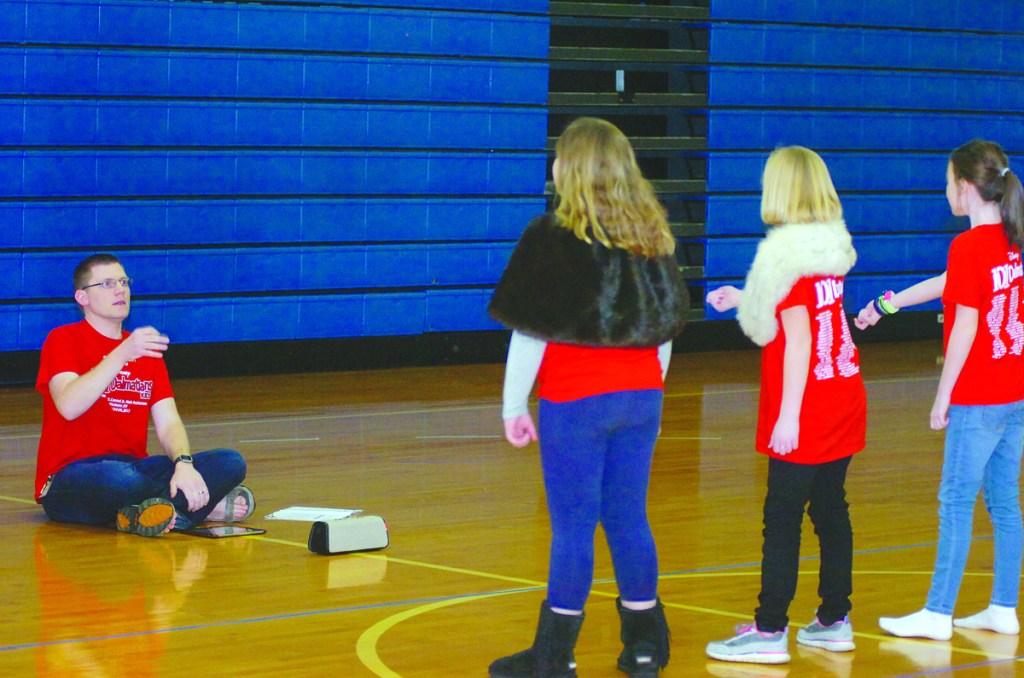 Strode Station Elementary School music teacher Collin Berner does warm-up exercises with the cast of the school’s production of Disney’s “101 Dalmations” during a recent rehearsal. (Photo by Seth Littrell)

When many people think of an elementary school play, a well-organized musical production may not come to mind.

Berner has been teaching music for 11 years, and for the last four years, he has worked with other teachers and volunteers at the school after classes to train a new crop of theater students by pushing themn to surpass expectations.

“In elementary school you’re expected to do some sort of stage performance,” Berner said. “We did a few things here and there, but in 2013, we decided to pull out all the stops.”

Rather than the usual elementary school performance ideas, Berner suggested putting together a feature-length musical.

The change represented a challenge for Berner, who had a background in band, but little experience in theater. He said the first musical he directed, “Annie Kids,” was a bit of a learning curve.

Veronica Brown, a teacher at Shearer who has acted as Berner’s stage manager since “Annie,” said the production group has learned a lot since the first performance.

“We were what I would call organized chaos then, versus being a well-oiled machine now,” Brown said. “Now we very much work like a family.”

When asked what has changed from 2013 to the present, Berner laughed.

“Your first production is always a trial by fire,” Berner said. “At the end of the day though, the focus was still on the kids which still made it worth it.”

He said that the most important thing he learned over the course of preparing for the first show was to not force his vision for every scene on the students, but to allow them to have input on their characters as well, and as a result of that change he has seen several new leaders step up with each production.

Hannah Christopher, who played the leading role in Annie, said the only word she could use to describe her work with Berner was “fantastic.”

Her mother, Melissa Christopher, said she was impressed watching Berner work with students, and she and her daughter still help the school in its musical productions.

“He’s really good with the kids and he puts on a good show,” Melissa Christopher said. “It’s a full-fledged show.”

Berner said that as the first showing of Annie was wrapping up, all the hard work that had been put into it became worth it.

“I’m a pretty even-keeled person,” he said. “But when we did Annie at the final curtain I couldn’t hold it together. It was just a fantastic night.”

Since then, Berner and his students have gone on to produce musical versions of Aristocats and Sleeping Beauty. They are currently finishing work on their fourth musical, 101 Dalmatians, which will premier March 3.

Berner is only able to work with students until the end of fourth grade, after which they move on to Baker intermediate.

However, many of his former students, including Hannah Christopher and fifth grader Emma Durrence, say that Berner is still a mentor to them as they have moved on to intermediate and junior high school.

Durrence played Aurora in Shearer’s production of Sleeping Beauty, and is now playing Belle in Baker’s Beauty and the Beast.

She said Berner is still a motivating influence for her.

“He drives me to be my best, and for all the years I was at Shearer we had fun,” she said.

The affection for Berner from his students comes naturally, Brown said, because in addition to pushing them to be their best, he highlights their strengths.

Berner said that he couldn’t do the shows each year if it weren’t for the people he had helping him, like Brown or the number of Shearer staff and volunteers who take part in the productions.

He also said he was appreciative of Leeds Center for the Arts — which provided space to his musicals in the past at no cost.

Because of ongoing renovations at Leeds, Berner said 101 Dalmatians will be shown at Robert D. Campbell Jr. High.

Scoping out the sewer