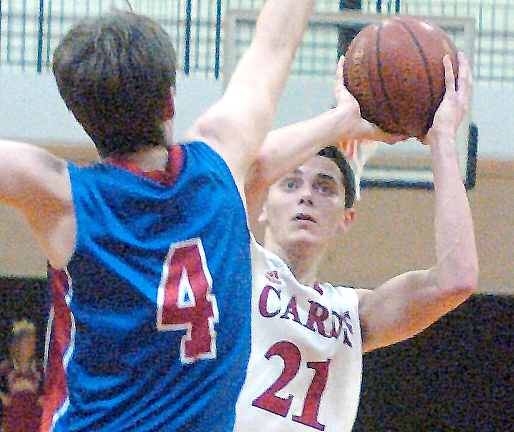 PARIS — The Montgomery County High School boys basketball team had a few tricks up its sleeve Wednesday night in the opening round of the 40th District Tournament.

The Indians used a tricky defense and the return of their top scorer to try and upset George Rogers Clark, but the Cardinals had the answers in the second half to come away with a 57-44 victory.

“We were ready for their zone, but they changed it up,” GRC coach Josh Cook said. “We worked on communication. They have to communicate on the floor. And we executed when we needed to, but they (Indians) did a good job of forcing us to communicate early.”

The postseason jitters plagued both teams early on. Neither team scored a field goal until midway through the first quarter. Montgomery County led 9-8 after the first period.

The Indians executed at the end of the second quarter to get a 3-pointer at the buzzer — taking a 28-22 lead into the halftime break.

GRC responded in the second half, which speaks to the Cardinals’ maturity, Cook said.

“If that happened in December, we wouldn’t have recovered,” he said. “We are a different team.”

GRC opened the second half with an 8-0 run — scoring on a Will Philpott bucket and a pair of Ryan Cooper 3-pointers. The run was fueled by a pair of Montgomery County turnovers.

The Cardinals buckled down on defense, holding the Indians scoreless until 2:49 left in the third quarter.

The press kept Montgomery out of sorts offensively and helped create opportunities for the Cards.

“We’re not a team who can press for 32 minutes,” Cook said. “We use it in spots and some guys were able to come in off the bench and help us out.”

GRC took a 40-36 lead into the final quarter and again started hot — Chase Taylor and Jordan Graham each picked off errant Montgomery passes and scored on the ensuing fast breaks — which gave the Cardinals a 44-36 lead.

The Indians threatened to hang around, but a Pharaoh Davis free throw with three minutes left cut the lead to 51-44, which was as close as they got the rest of the way.

Cooper finished with a double-double, scoring a game-high 24 points and snagging 10 rebounds.

Philpot also had a double-double, scoring 13 points and collecting 11 rebounds. Taylor put in 10 points while collecting five assists and three steals. Jordan Graham had a team-high seven assists to go with four points.

Ben Jackson scored six points off the bench for the Cards.

Montgomery was led by Landon Barber and Brennan Canada — back on the floor for the first time since Dec. 17 — who each had 11 points.

GRC improves to 20-11 and earns a berth in the 10th Region Tournament. But first, the Cards head back to Paris to face the Greyhounds for the district crown Friday. Tip is set for 7 p.m.