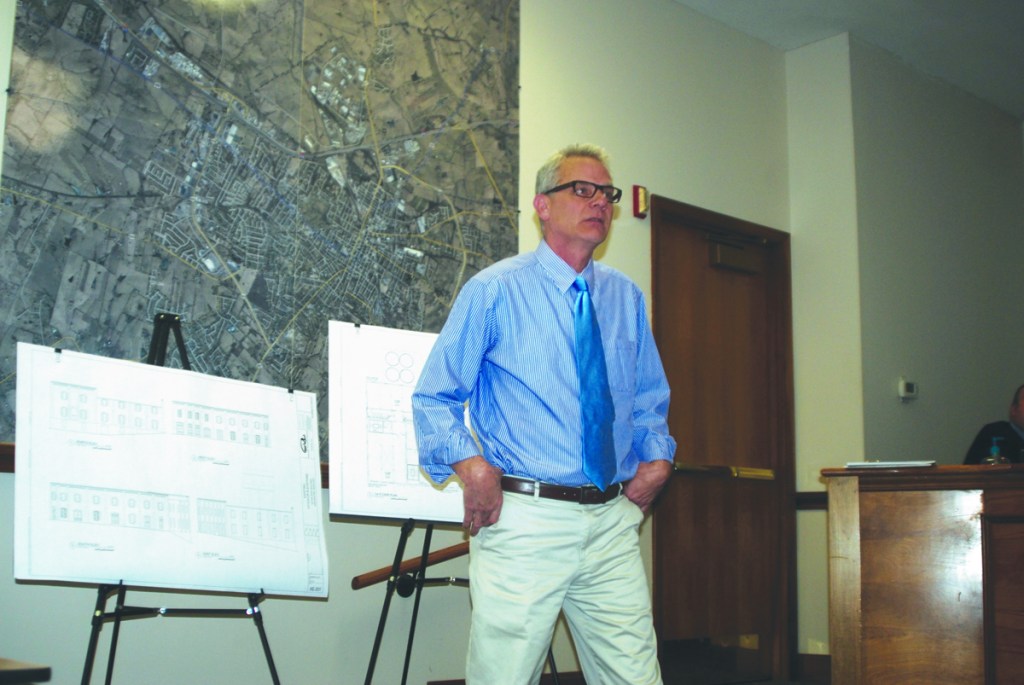 Jimmy Piper of GRW details renovation plans for the Sphar building Tuesday to the Winchester Board of Commissioners. (Photo by Fred Petke)

City leaders got their first public look at plans to turn the crumbling Sphar building into an anchor location on North Main Street.

The City of Winchester purchased the warehouse and former seed building a year ago with $100,000 from The Greater Clark Foundation. According to early estimates presented Tuesday, stabilizing the building and opening some city offices in the space will cost nearly $2 million.

“We have a lot of work to do,” Winchester Mayor Ed Burtner said.

The 136-year-old, 27,000 square-foot building was once part of the thriving agricultural and railroad business in Winchester, but has fallen into disrepair in recent years. City and county officials plan to make the building a welcome center as well as office space for tourism and industrial-related city offices.

Jimmy Piper, an architect with GRW Engineers, said there would be plenty of space for other tenants as well. The existing freight elevator would be converted to a passenger elevator and the existing stairs would be retained. Some of the existing machinery would be repurposed as well.

There are some significant structural issues, including damage to several areas of the floors and the roof. Masonry and metal work alone was estimated to be almost $730,000 of the project budget. Piper said the roof will be replaced, along with several windows and doors. They are also interested in recreating the loading docks which fronted the railroad tracks.

Piper said he expects it will take about 60 days for the project to be approved by the necessary state and federal authorities and another 45 days for the bid process. If all goes according to schedule, it could be completed by this time next year.

Plans call for the building to house offices for Main Street Winchester, the industrial development authority, chamber of commerce and tourism, as well as the welcome center. Piper said it could also house a radio studio.