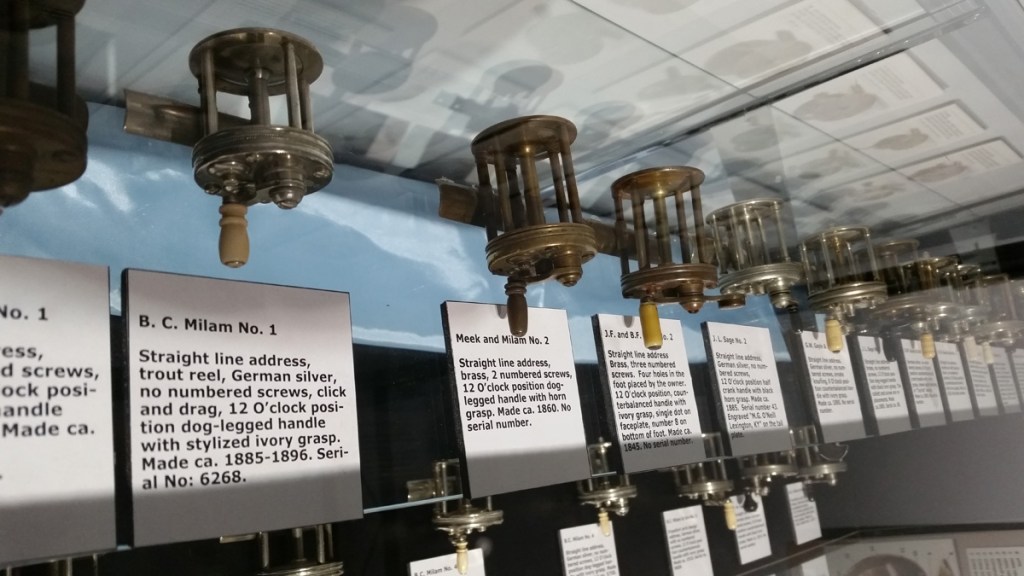 Some of the reels from the “Frankfort’s Fishing Reels, Jewels of the Bluegrass” exhibit at Frankfort’s Capital City Museum. Photo: Kathy Witt

In spite of the miles and miles of fishing lakes and streams in the Bluegrass, Kentuckians may be surprised to learn the multiplying gear bait-casting fishing reel business took off right in their capital city.

Back in the 1830s, Frankfort had a burgeoning business in reels. These were not just any fishing reels, but hand-tooled, precision-machined and elaborately designed reels adorned with jewels, silver, gold and ivory handles — the caliber of craftsmanship one might expect from the clockmakers, silversmiths and jewelers that were making them.

About 30 of these unique reels are part of the exhibit, “Frankfort’s Fishing Reels, Jewels of the Bluegrass,” at the Capital City Museum. The reels, along with a historic lathe used to make them and other related artifacts and memorabilia, will be on display through October at this gem of a museum located in the heart of Kentucky’s capital.

I had the chance to see these finely wrought, customized works of art on a recent visit to Frankfort and was surprised to learn the standard in the reel-making industry was created by Frankfort residents and brothers, Jonathan and Benjamin Meek. Other well-known names — Benjamin Milam, George Gayle and James Sage — apprenticed with the brothers, and for all but Sage, generations of the families would remain in the trade.

Amidst the reels, visitors will spot a large brass fishing reel model that Benjamin Milam once displayed in the storefront window of his Frankfort shop. Twice the size of the substantial number 12 fishing reel, the model is considered one of the most unusual pieces in the collection.

The museum is housed in a remnant of the old Capital Hotel that survived the 1917 fire that wiped out most of the building. It is a small but worthy museum, with exhibits relating to the Kentucky River, the city’s Hollywood connections and Frankfort politics, including Sen. William Goebel’s 1900 assassination.

In fact, one of the reels in the exhibit once belonged to Judge James H. Hazelrigg, chief justice of the Kentucky Court of Appeals at the time of Goebels’ murder. Goebels was running for governor in 1899 in a hotly contested four-person race and was shot as an investigation into election results was underway. Hazelrigg administered the oath of office to Goebels three days before he died.

Visiting the Capital City Museum and its “Frankfort’s Fishing Reels, Jewels of the Bluegrass” exhibit will appeal to adults and older children, especially history buffs and those who enjoy fishing.