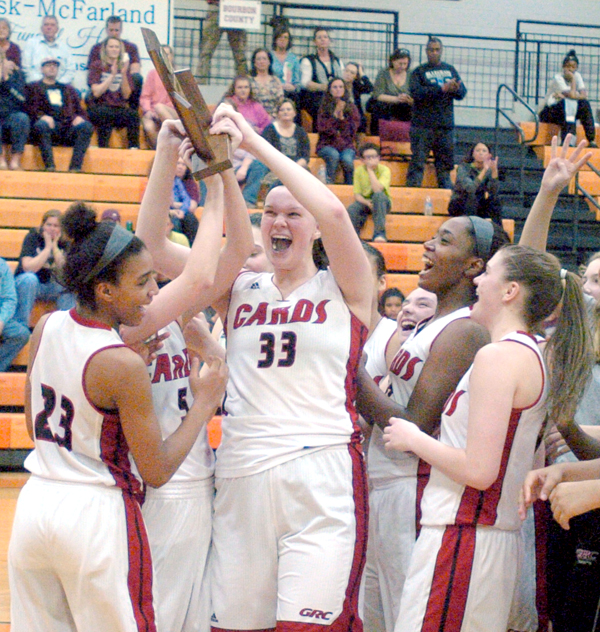 PARIS — Things were about as ugly as they could be for the George Rogers Clark High School girls basketball team in the 40th District Championship game Thursday.

The Cardinals scored just 15 points in the first two quarters, missed every attempted 3-pointer in the first half, were down at halftime and just about everyone had two fouls.

GRC righted the ship in the second half, scoring the first 17 points of the third quarter and finally taking control to beat Bourbon County, 50-31.

“When we’re making shots, we can get into our pressure and do what we want to do,” GRC coach Robbie Graham said. “Overall, we did a good job in the second half and played a lot better. And I think we were relaxed. We were tight in the first half.”

Things could have hardly gone better in the first half for Bourbon County, who held a 16-15 advantage at the break and had the Cardinals back on their heels with foul trouble. The Colonels managed it with only senior forward Rose Mason in foul trouble.

“When we’re not making shots it’s hard to get into our press to turn them over and put pressure on them,” Graham said.  “We got some really good looks. We knew they were going to play zone. We prepared for it. We missed a bunch of shots.

“To compound that, on the defensive end we never got into rhythm because we were reaching and fouling too much. We kept putting them on the free-throw line. We look up at one point and we have five or six girls with two fouls.”

Neither offense looked good through the first two quarters. GRC nursed an 11-9 advantage after the first period only to be outscored 7-4 in the second.

That all changed in the third quarter.

On the first play, Sha’Maya Behanan scored inside and was fouled by Bourbon’s Chariss Wilson. Behanan sank the bonus free throw. The Cards were up 18-16 and never trailed again.

Behanan had 11 points, six rebounds and four steals in the game.

“Sha’Maya had a big game on the glass, did a good job attacking the rim,” Graham said. “She got her hands on a lot of balls. She made some big baskets when we needed a basket.”

Hayley Harrison had six points and they came in a bunch. GRC forced two turnovers on the following plays, both led to 3-pointers from Harrison.

Bourbon called a timeout with five minutes left in the quarter and the Cardinals had scored the first eight points. They added nine more before the Colonels got their first points with 2:40 left.

The Colonels put a little pressure back on GRC when they made a bucket at the buzzer to make it 34-25 going into the fourth quarter, but the Cards held them to just six points the rest of the way.

Behanan and Elizabeth Hardiman shared the team lead in points with 11. Kennedy Igo had nine to go with six assists. Maleaha Bell put in four. Harrison finished with six points and five rebounds.

Jasmine Flowers came off the bench to give the Cardinals five points. Her sister Tyra Flowers put in four.

“The bench came through for us,” Graham said. “Ty (Flowers), Aliyah (Gray), Kylee (Murray) and Jasmine came off the bench and gave us a big lift.”

Chariss Wilson had a game-high 14 points. Kennedy Kelly put in 10 points in the loss.

The title was the fourth straight for the Cardinals (26-4), who now go into next week’s 10th Region Tournament as a higher seed. Bourbon (16-16) also qualifies for the region tournament.

The bracket draw will be held in Harrison County — the tournament host — Saturday morning with game dates set for Monday, Tuesday, Friday and Saturday of next week.

GRC gets 3rd chance at ‘Hounds