Nailed it or Failed It: Pasta recipe was good, not great 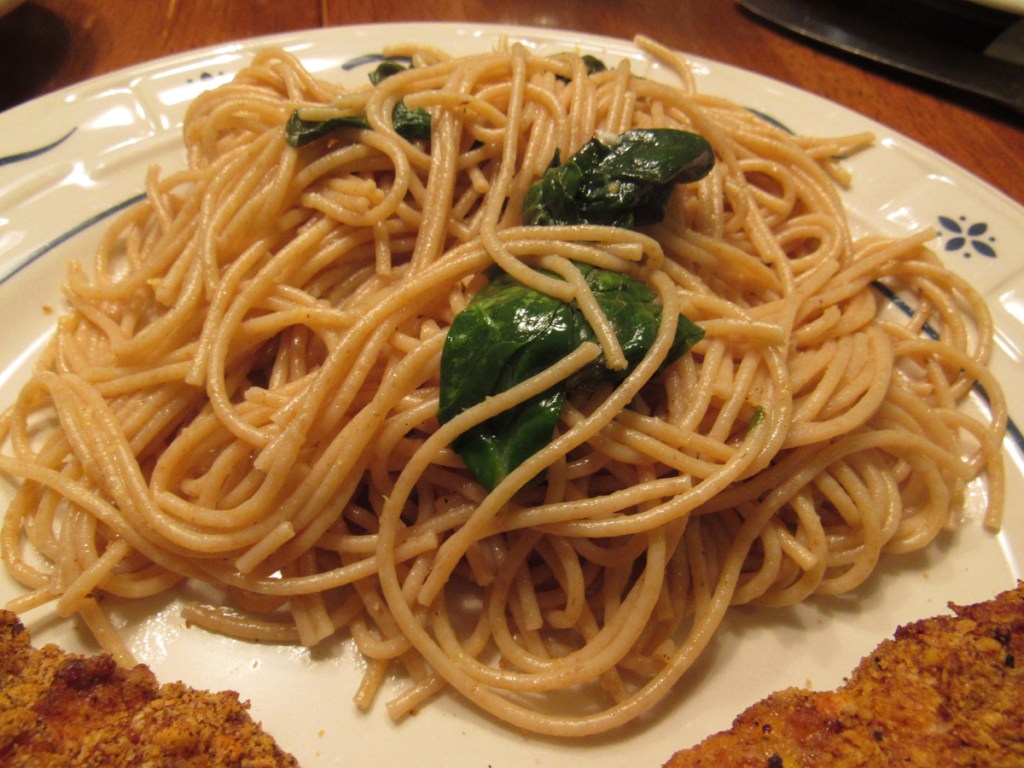 I  found this recipe for lemon pasta with spinach at Tasteofhome.com. I decided to make this side dish to go with the chicken I wrote about a couple of weeks ago.

I have had pretty good luck with Taste of Home recipes so far, and I had spinach in the refrigerator that needed to be used — really, I had two partial bags of baby spinach. So I figured this recipe was a good one to try.

Now, I’ve know you are wondering, since I’ve told you I don’t like very many green vegetables, why I am going to use spinach. I don’t want to eat just a spoonful of cooked spinach, but having a little in with something else isn’t bad.

I love pasta, and I figured this would be the perfect way to use up the spinach so it wouldn’t end up in the compost pile.

Right before I started making this dish, Brad came home from work and asked what was for supper. When I mentioned this dish he said he had some shiitake mushrooms that needed to be cut and asked that I include some in this dish. Even though the recipe doesn’t call for them and I don’t like them, I agreed — knowing I could pick them out of my portion.

I started heating my pot of water to cook the pasta, grated the lemon peel and juiced a lemon. I kept checking the pot of water because I didn’t think the water would ever boil. I should have started it a lot earlier than I did because the chicken that was in the oven was getting close to being ready. You know the old saying “a watched pot never boils?” Well, that sure felt true.

While waiting for the water to boil, I picked through the two partial bags of spinach to remove the stems (I don’t like the long stems left on it) and to remove any pieces that didn’t look good.

Finally, the water began to boil and I added half a box of pasta. I didn’t have angel hair pasta, so I used thin wheat pasta. Frankly, I think you could use any kind of pasta you have on hand for this recipe.

While the pasta cooked, I melted the butter and sauted the garlic, along with Brad’s mushrooms. I went ahead and added the lemon juice, lemon peel, salt and pepper. When the pasta was done, I drained it and let it sit while I added the spinach to the warm lemon, garlic and butter mixture. When the spinach wilted a bit, I added the pasta and tossed. Now we were ready to eat.

When looking at the pasta dish, Brad commented that it didn’t look like there was much spinach in it, I had to agree. I told him it would be real “lemony” since there was lemon juice and lemon peel in the dish. However, when we tasted this dish, it wasn’t that way at all.

Since this recipe was easy to follow and turned out like I think it was supposed to, I’d say I nailed this recipe, but I don’t plan on adding it to my self-made cookbook because it wasn’t that great.

Don’t get me wrong, it was good, just not great.

When we’d finished eating, Brad’s comment was it could have used about three times the spinach (and of course more mushrooms). I think it could have use a little more spinach and less pasta, which might have allowed the lemon flavor to come through.

Cook pasta according to package directions.

Meanwhile, in a large skillet, saute garlic in butter until tender.  Add the spinach, lemon juice and peel, salt and pepper; cook 2-3 minutes longer or until spinach is wilted.