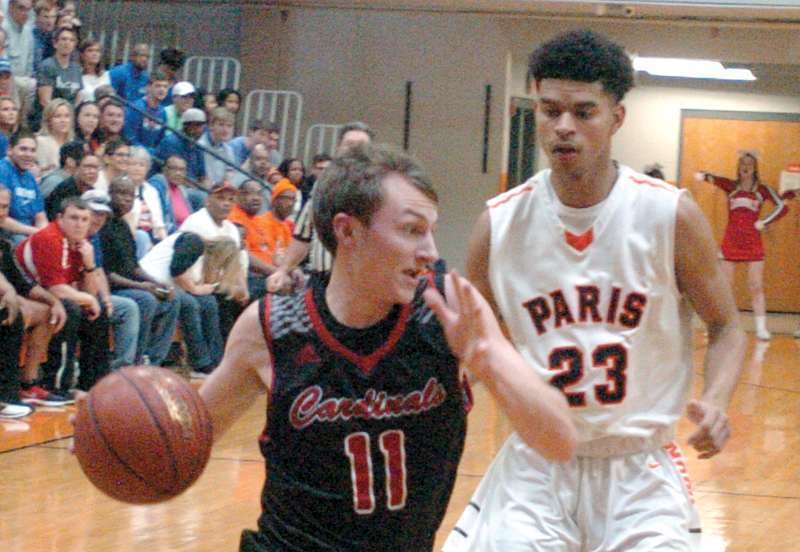 PARIS — The George Rogers Clark High School boys basketball fell short of its upset bid to unseat Paris as the champs of the 40th District.

“In my opinion, Paris is a Top 15 team — they are really good,” GRC coach Josh Cook said.

Through the first half Friday, the Cardinals (20-12) certainly looked capable of stealing the championship trophy from Paris (25-7).

GRC started the game with a 11-2 run over the opening five minutes.

The Cards trailed just 31-28 at the halftime break.

The wheels came off in the third quarter, as the turnover differential — 32 for GRC to just nine for Paris — started to show.

The Greyhounds rode a 23-9 third quarter to take control of the game.

“You have to avoid that bad three or four minutes,” Cook said. “Because they (Paris) are really hard to come back against.”

But the Cardinals went to work trying to do just that. After a Chase Taylor 3-pointer, a Jordan Graham jumper and a Jehdon Jenkins free throw, the Cardinals cut the lead to nine with 3:42 left to play.

Graham fouled out with 2:28 left and the Cardinals go no close. Graham was forced to sit for long stretches because of foul trouble.

“That hurt us because Jordan is a good decision-maker against their press,” Cook said.

Will Philpot led the Cardinals with 15 points and 14 rebounds. Taylor finished with 13 points and eight boards. Graham had 12 points.

Paris goes into next week’s 10th Region Tournament on the winner’s side of the bracket. GRC also qualifies for the tournament. The draw is set for Saturday morning.

“We have as good a chance as anyone to win the region,” Cook said. “No one will prepare harder than we do. I’m excited. The kids will be ready.”