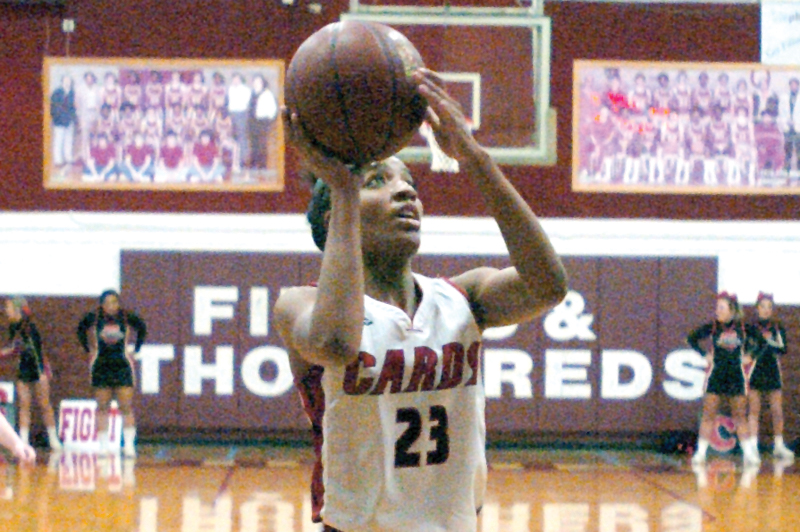 CYNTHIANA — As the George Rogers Clark High School girls basketball team walked off the court after defeating Scott in the opening round of the 10th Region Tournament, senior Kylee Murray turned to her teammates and told them, “Two more.”

That’s what it will take for the Cardinals to claim a region title and put them into the state tournament. A rematch win over Scott, 64-52, Monday is just the start.

It wasn’t the easiest of draws for the 40th District Champion Cardinals (27-4), who were faced Scott (20-13), one of just four teams to beat them this season.

“We cut down a bunch on our turnovers from our previous matchup with them,” GRC coach Robbie Graham said. “Their zone wasn’t as effective against us. We worked hard on that. We really moved the ball. We tried to penetrate gaps and be aggressive, not settling for jump shots.”

The Cardinals also used a zone, switching between it and man-to-man defense. Graham said he hoped the zone would limit GRC’s foul trouble while also allowing them to give extra focus to the Eagle’s top scorers, Ana Clephane and Alexis Stapleton.

Clephane had a team-high 16 points and Stapleton finished with 12. Summer Secrist added 13, but the rest of the team had just 11 points combined.

While the Cardinals commited five more turnovers than the Eagles (17-12), GRC still had the edge in points off turnovers (18-16). And the biggest difference came on the glass — the Cards outrebounded Scott 42-25.

“We did a good job rebounding,” Graham said. “I’m pleased with a win against a very good basketball team.”

Kennedy Igo scored a game-high 21 points to go with five rebounds and five assists. Sha’Maya Behanan had a double-double with 19 points and 12 rebounds.

Elizabeth Hardiman scored the first six points of the game for GRC, accounting for the first three field goals by either team. She finished with 14 points and six rebounds.

GRC moves on to the semifinal round Friday. The Cardinals tip off at 6 p.m. against Nicholas County at Harrison County High School.

The Cards faced Nicholas back on Dec. 5 in Carlisle, coming away with a 62-44 victory.