Campbell storms back in second half to top Cards 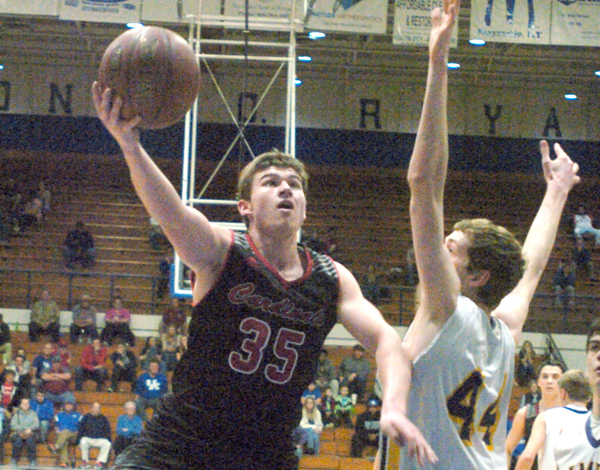 MAYSVILLE — The George Rogers Clark High School boys basketball team looked every bit the part of a bracket-buster Wednesday in the opening round of the 10th Region Tournament at Mason County High School.

The Cardinals held a seven-point lead in the third quarter over Campbell County, but their offense went quiet in the third and the Camels’ offense came to life in the fourth.

Campbell, one of the favorites to bring home the championship, survived 55-45.

“We lost our aggression. We lost our a composure some,” GRC coach Josh Cook said. “They made a few adjustments with their players and we didn’t do as good a job defensively. We gambled and gave up some open 3s we didn’t give up in the first half.”

GRC played well enough in the first half to build a 24-19 lead. The Cardinals did that largely by out-rebounding the Camels (20-14) and avoiding turnovers. They committed just three in the first two quarters.

They also got a big lift from Will Philpot, who put in 15 points in the first half.

GRC still won the rebounding battle in the second half, finishing with a 39-28 advantage, but the Cardinals committed eight turnovers and the Camels limited Philpot to just five second-half points.

He still finished with a double-double — 20 points and 11 rebounds.

Philpot was named to the all-tournament team for his efforts.

“He works hard against whoever is guarding him,” Cook said. “We’ve got to find more ways to get the ball to him.”

After a solid first half, the Cardinals looked for more of the same in the second. Campbell opened the half with a 1-3-1 zone which the Cards navigated easily to set up a bucket for Philpot on their first possession.

But GRC didn’t score again until Jordan Graham hit a free throw with 1:22 left to play in the third quarter. The Cards finally got another field goal when Graham hit a jumper to pull them to within 31-30 with 45 seconds left in the third. The Camels opened the fourth quarter with a 12-2 run and never looked back.

“In these environments you have to play every possession and the leadership factor has to be there,” Cook said. “Our kids tried to do those things, but Campbell County is a really good team. They don’t get rattled. They never really were uncomfortable. They made the plays in the second half they needed to win.”

“Our kids played hard,” Cook said. “They wanted to win. We just made some mistakes and Campbell County is the kind of team that will take advantage.”

The Camels got a game-high 21 points from Garren Bertsch and advance to face Bracken County next week. Bracken defeated Harrison County, 52-40, in the night’s second game.

The Cardinals finish the season with a 20-13 record. The junior-laden team has no seniors, so should expect everyone back next season.

“It’s been a great year,” Cook said. “I feel blessed to have had the opportunity to coach this group of kids.”