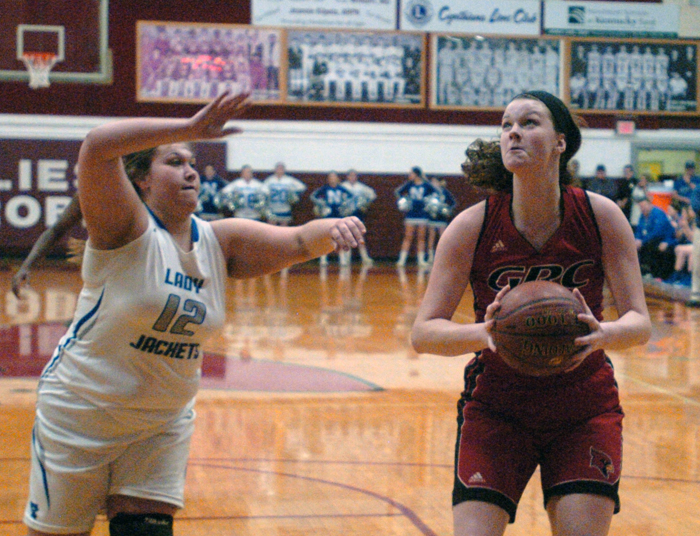 CYNTHIANA — Whatever the result of Friday’s second game of the 10th Region Tournament semifinal round, the George Rogers Clark High School girls basketball team was going to get a shot at some measure of revenge.

Should Campbell County pull the upset, the Cardinals would get another crack at the Camels after last year’s thrilling, overtime semifinal game. If Mason County held serve, then the Cards would have a shot at one of just a handful of teams to beat them this season.

Despite holding a lead in the third quarter, the Camels didn’t have the endurance or depth to keep Mason County down for 32 minutes. The Royals survived to advance to tonight’s championship game with a 51-47 victory.

Mason shot 60 percent in the second half and won the rebounding battle 34-25 to avoid the upset. The Camels had led until the third quarter, holding a two-point edge at the half. The Royals managed to take a slim two-point lead into the fourth quarter and used a 12-2 run at the start of the period to nearly blow it open.

The Camels hung around, though, chipping away before finally running out of gas. Campbell’s Taylor Clos had a game-high 17 points to lead the Camel charge. Mackenzie Schwarber added 12 points in the loss.

Mason got 16 points from Whitney O’Mara and 11 from Briana McNutt.

It’s a fitting title game for the 10th Region, as GRC and Mason were the top two teams in the preseason coaches’ poll and stayed there through the season. By the Cantrell Rankings, Mason had been rated No. 1 and GRC No. 2 just about all year in the region.

The teams have the best records in the league with GRC holding a region-best 28-4 mark and the Royals sporting a 23-8 record.

The title game should be an exciting one, especially if the regular season meeting between the two teams — a 54-51 win for the Royals in Winchester — is any indication.

O’Mara paced Mason with 18 points in that Jan. 25 contest. McNutt added 10 and Maddie Boone put in eight. The Cardinals were led by Hayley Harrison’s 13 points and Sha’Maya Behanan’s 12.

But that game was more than a month ago. And GRC coach Robbie Graham wants his team to be looking forward.

“We’re going to play tomorrow at 7,” he said between games Friday night. “We’ll tip it up against Campbell or Mason. We’re just looking forward to tomorrow. We’re not looking in the rear-view mirror. We’re looking ahead. And we’re excited to have the opportunity to play for a 10th Region championship.”

The opponent didn’t matter for Behanan either.

“We’re ready for anyone,” she said.