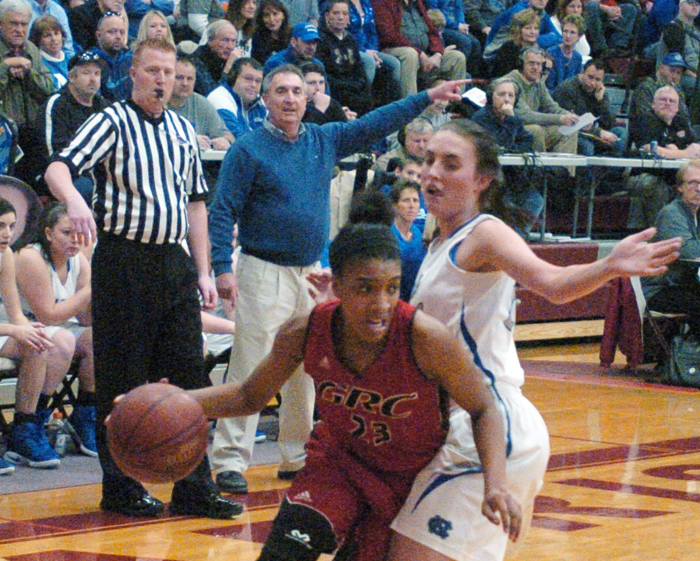 CYNTHIANA — The 3-point shots were falling and the defense was airtight Friday night in the semifinal round of the 10th Region Tournament. For the George Rogers Clark High School girls basketball team, that’s usually a recipe for a pretty good night.

The Cardinals made seven 3-pointers in the first half and held Nicholas County to just 13 points through the first two quarters to cruise to a 71-41 victory at Harrison County High School.

The win pushes the Cardinals into tonight’s championship game where they will take on Mason County, who defeated Campbell County in the night’s second game.

“The girls had a great start tonight,” GRC coach Robbie Graham said. “Nicholas County is a tough team to play. They have some experience. Winning in the the All ‘A’ gave them a ton of confidence. They were playing really well late in the season. So, we knew we had a tough battle, so we prepared like we prepare for everyone else. We didn’t overlook any detail. We came out and had a great start.”

“It was important, because it helped us execute,” she said.

The Bluejackets were committed to a 3-2 zone throughout the first half, even as the Cardinals found easy, open looks against it — and sank them. GRC built a 18-7 first quarter advantage and were up 39-13 at the half.

“They do what they do and we do what we do,” Graham said. “Fortunately, we were able to make some shots early and relaxed us a little a bit. If we’re making shots, we’re hard to guard. We’ve got E (Elizabeth Hardiman) working inside. We’re tough when we’re making shots.”

And even when they weren’t making shots, the Cardinals were still crashing the glass and outworking Nicholas. GRC finished with a 33-23 advantage in rebounding and blanked the Bluejackets, 14-0, in second-chance points.

And it revealed a worrying trait for potential GRC opponents down the road — the Cardinals can play fast or slow, and you’ll have to pick your poison.

“We can go big if we need to,” Graham said. “Small and quicker if we need to. We are comfortable playing either way. We can play fast-paced and slow down when we need to.”

As well as the Cardinals executed all over the floor, Graham liked his team’s 19 assists the most.

“One thing I’m really impressed with our team is we share the ball so well,” he said. “Everybody is looking for each other, looking for one more pass. We did a tremendous job of sharing the ball.”

On the other side of the ball, Nicholas had few answers for GRC’s defense, which showed a zone, half-court man-to-man and different presses forcing nine turnovers and turning those into 21 points in the first half.

“We like to show them different looks,” GRC sophomore Hayley Harrison said. “We started out in a zone to widen our defense for the shooters.”

Kennedy Igo led the Cardinals, pouring in a game-high 27 points. Behanan finished with 11 to go with five rebounds. Harrison finished with eight points and handed out five assists.

Hardiman put in seven points and grabbed 10 rebounds. Maleaha Bell was held to two points but had five rebounds and three assists in the win.

Nicholas got 10 points from Shelby Stafford and eight from Autumn Martin.

Now the Cardinals can turn their attention to one more game — a rematch with Mason County tonight at 7 p.m. for a region trophy and a berth in the state tournament — the third of three goals the Cardinals set for themselves every season.

“Our goals are No. 1 seed in the district — check, win the district – check, and now we’re one game away from being region champs and going to Northern Kentucky,” Graham said.

And it’s a first for a lot of Cardinals, who were one overtime game away from the region championship last season.

“This is one of the best feelings I’ve ever had,” Behanan said. “I’ve never had this experience before and I’m happy to have a chance to.”

“It’s my first time going,” she said. “It’s a great feeling to have these teammates right behind you ready to win, too.”

BY THE NUMBERS: Region girls tournament down to its…