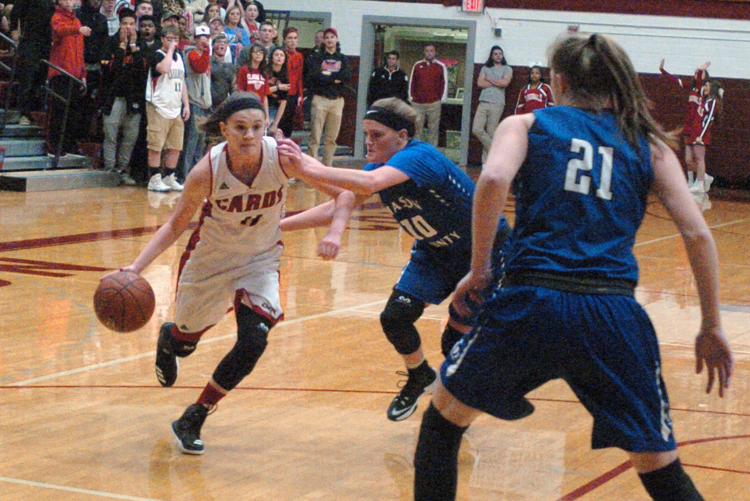 CYNTHIANA — As with most championship games that go into overtime, there were plenty of big moments during the 10th Region Tournament title game between George Rogers Clark and Mason County.

GRC freshman Kennedy Igo seemed to thrive on those as she helped the Cardinals earn a 56-53 victory at Harrison County.

The biggest was her 3-point shot to start the scoring in the overtime period — giving the Cards a lead they never relinquished.

Igo was vital for the Cardinals. They had kept a 10-point cushion for much of the game, but Igo picked up her third foul early in the second half. The Royals took advantage of her absence to close the gap.

She had four points in the first quarter and seven in the second. She put in six in the fourth and the crucial 3 to start overtime. Her only quiet quarter was the third, when she still put in two points despite sitting for most of it.

“She knows when to bring it and she brought it,” GRC senior Elizabeth Hardiman said. “She’s a phenomenal player and I’m so glad to have her.”

Igo finished with a game-high 19 points. She hit a pair of 3s and was five-of-six from the free-throw line. She had three rebounds, three assists and a pair of steals.

“She played awesome,” GRC senior Kylee Murray said. “I’m so proud of her. I love it when she goes off. She shoots the ball and I just know it’s going in.”

It was quite the weekend for Igo, who also poured in 27 points in Friday’s semifinal win over Nicholas County.

Now she has a chance to play some more basketball — Wednesday in the state tournament.

“I’m so excited,” Igo said. “There are no words to describe how I’m feeling right now.”